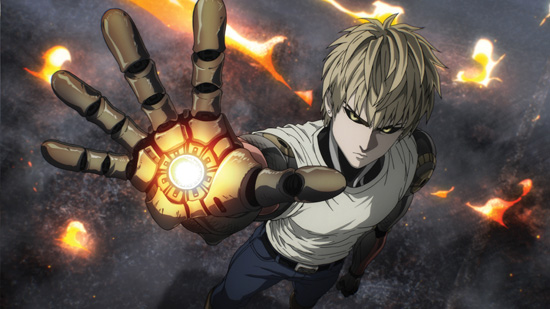 What if Superman was incredibly lazy and bored?

Saitama’s an unemployed and somewhat dimwitted slacker who happens to be the most completely and utterly invincible superhero of all, sporting a garishly silly costume very similar to Anpanman’s. Why, he trained so hard to gain power that he went bald! In a world where monster attacks and world-ending events seem to happen on a daily basis, where superheroes and villains are ubiquitous, Saitama has no recurring arch-enemies because every fight he gets into ends after he lands a single blow, with not a care given to the ensuing collateral damage.

Why, even in the only good live-action Superman movie ever made as of this writing—I speak of course of Man of Steel—Kal-El felt sort of bad for what he couldn’t prevent. Not Saitama! He’s saved the world countless times from enemies and crises without breaking a sweat, yet nobody knows who he is. What’s a guy got to do to see some excitement, anyway?! 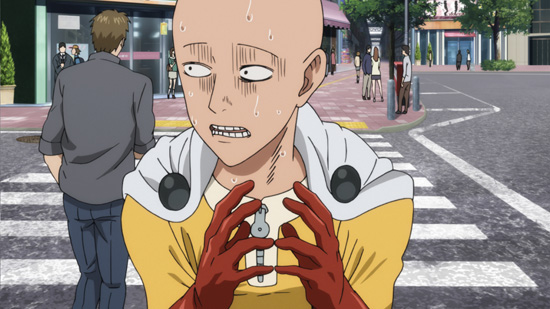 The webcomic’s author, whose Internet username is just ONE, didn’t exactly have the best artwork (whether intentional or not), but their hero designs, comic timing, and understanding of what being a superhero is truly about were so spot-on that One-Punch Man became a viral hit to the tune of tens of millions of views. Pretty impressive for a comic started just to entertain the author, huh?

One of the fans of the webcomic was renowned manga artist Yusuke Murata (Eyeshield 21), who struck a deal with ONE to redraw the webcomic in a brand-new digital manga edition. The results were jaw dropping, as Murata took advantage of the digital medium’s lack of page count limits and dimensional restrictions to create stupendously detailed artwork and double-page spreads that read at times as though the reader were looking through an animated flipbook. Despite all this, Saitama himself remains roughly as simplistically designed as before, in comical contrast to his insanely detailed surroundings. 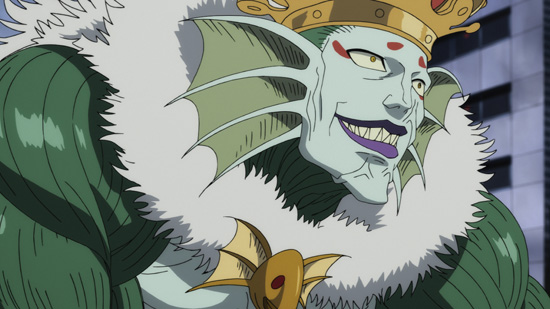 I began subscribing to the English language digital edition of Weekly Shonen Jump in 2013 for just one reason, and that was to read Murata’s edition of One-Punch Man. Creating such gorgeous illustrations takes time, and so the Jump editions opt to split up the lengthy webcomic installments into standard chapter-sized chunks, which is why they’re often numbered “Chapter 25, Part 2.”

Murata’s edition has now become popular enough that it’s been released in traditional printed manga format, though a sequence that may have originally been depicted as a series of double-page spreads is often reduced down to a few panels to conform to printed book requirements. Yet even with the artwork altered in this manner, manga volumes of One-Punch Man have topped sales charts both in America and Japan alike.

Fan expectations could not have been higher when an anime version was announced. With Murata’s version looking as outstanding as it does, the animation would have to be of comparably superb quality for viewers to appreciate the appeal. Madhouse, already an anime studio generally regarded for high-quality work, would not only have to bring their A-game, but raise the bar … and that’s exactly what they did.

In adapting One-Punch Man, director Shingo Natsume (Space Dandy, Fullmetal Alchemist: Brotherhood) has once again assembled a cadre of Japan’s elite animators to shatter expectations of what television animation is capable of achieving. Saitama may only need one punch, but the effects of those punches are gloriously devastating. The story also moves along at a slightly faster pace than what most anime adaptations tend to stick with; roughly half a volume’s worth of manga material is covered per anime episode, so we don’t end up with uneventful episodes bookending the action. 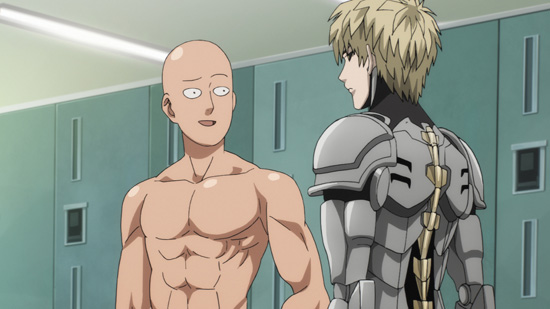 Of course, as Saitama himself notes in the first episode, “Having overwhelming strength is pretty boring.” How then does One-Punch Man remain so enjoyable? Incredible animation aside, the key is the supporting cast, who may not be as powerful as Saitama but are nonetheless compelling. Genos is a young, photogenic, Iron Man-like cyborg who serves as the straight-laced foil to Saitama’s generally easygoing naivety. Watchdog Man is a guy in a dog suit with seemingly superhuman strength. Mumen Rider, a parody of the motorcycle riding heroes, may just be a normal guy with a bicycle, but his willingness to help innocent people no matter the odds is what makes him “super” indeed.

Then there’s King, a fearsome-looking man who is renowned as the strongest and most powerful hero in the entire world. You’ll just have to see his awe-inspiring powers for yourself. One-Punch Man offers no shortage of superheroes, from the mundane to the silly to the stupendous. That way we can focus on their exploits while Saitama is sitting in his crummy apartment reading manga. As ONE noted in an interview, “The world is full of cool-looking heroes, so I didn’t think that was something I wanted to write about. Plus, I believe that heroes’ coolness comes from their spirit and not their looks. I don’t think how a hero looks is that important.” 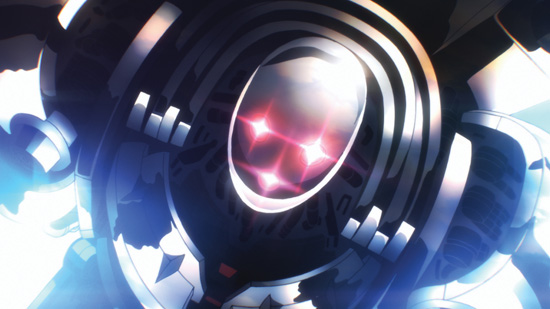 It will likely be some time before another season of One-Punch Man anime is produced. Murata’s redrawn version that provides the basis for the anime adaptation is, as of this writing, just under 60 chapters long. The English-language Weekly Shonen Jump releases are almost caught up with what’s in Japan, which is why new installments only show up once every month or so. What’s more, it takes multiple chapters to create a single episode of anime by virtue of the fact that sequences that occupy several pages elapse in mere seconds once animated. But it matters not whether more comes or how long it shall take; One-Punch Man is now and forever will be the superhero we deserve … as well as the one we need right now.