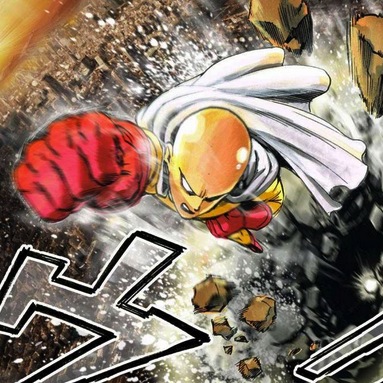 One-Punch Man—Yusuke Murata’s manga adaptation of the webcomic by ONE—is officially getting an anime adaptation. The announcement came in this year’s 15th issue of Shueisha’s Young Jump magazine, and cast and staff will be announced on March 21-22 at the Anime Japan 2015 event.

The Anime Japan cast/staff announcement will be delivered in a promotional video at Bandai Visual’s booth.

One-Punch Man currently runs in English in Viz’s digital Weekly Shonen Jump magazine, and the first two volumes are now being offered as a digital exclusive for $6.99 each.

Here’s how Viz describes it:

Nothing about Saitama passes the eyeball test when it comes to superheroes, from his lifeless expression to his bald head to his unimpressive physique. However, this average-looking guy has a not-so-average problem—he just can’t seem to find an opponent strong enough to take on! Every time a promising villain appears, he beats the snot out of ’em with one punch! Can Saitama finally find an opponent who can go toe-to-toe with him and give his life some meaning? Or is he doomed to a life of superpowered boredom?