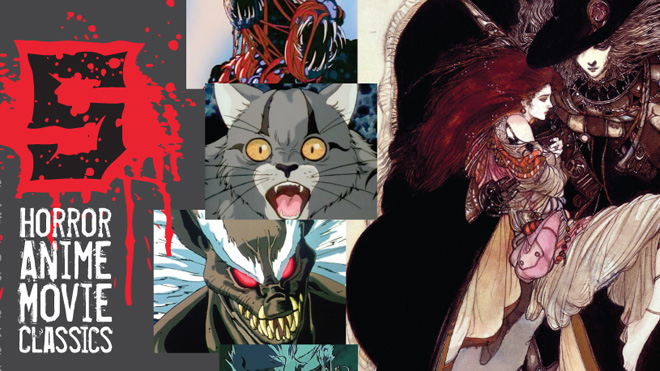 There’s little doubt that horror anime is dominated by TV series. However, horror films were one of the early driving forces of the growing popularity of anime in the West. Here are some recommendations for those that want a more manageable single dose of horror. 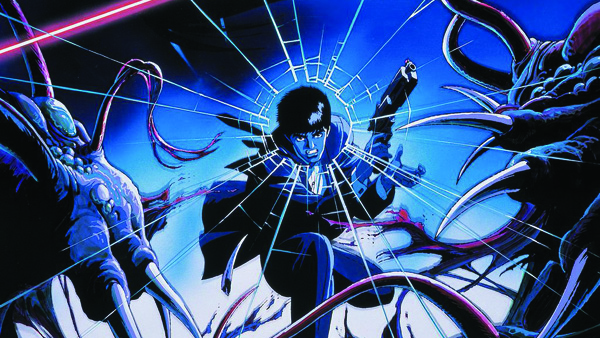 Wicked City is based on the book by Hideyuki Kikuchi, who is most famous for a long-running book series you will hear about later in this article.

After the handsome Taki picks up a lady at a bar a night of “amour” takes a turn for the worse when the mystery lady reveals herself as one of the demon realm, with Taki barely escaping with his manhood intact. Taki is an electronics salesman by day and an elite member of the Black Guard whenever needed. A job that, as Taki puts it, has “not much job security and a WHOLE lot of risk.” The separation between the demon world and ours is tenuous but maintained through good old politics and treaties; the newest treaty, it so happens, is going to be signed in Tokyo. Taki is then assigned a partner, the lovely Makie, who is a Black Guard from the demon world. Their job: make sure that their assignment, the 200-year-old Giuseppe Mayart, makes it to the treaty signing safely. Along the way there’s an army of demons doing their best to make sure that doesn’t happen.

Wicked City features the greatest body horror animation ever seen in anime or otherwise. Scenes from this would often be used to show just how “cool” anime can possibly look and with good reason. Not for kids or the weak of heart, Wicked City will be released by Discotek Media with both the US and UK dub. 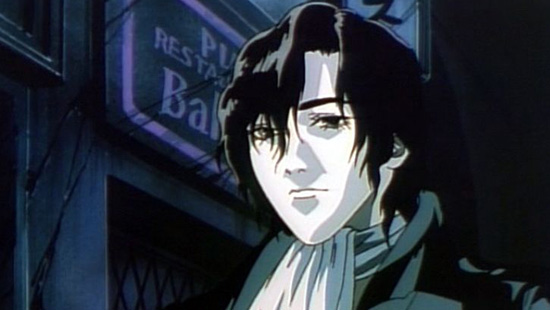 The Animated Works of Hideyuki Kikuchi

When it comes to works of literary Japanese horror that the West is familiar with, there’s no better known name than Hideyuki Kikuchi.

Kikuchi is most famous for his long-running Vampire Hunter D series (the most recent one was released in February 2016 and is the 30th volume). The animated world of D doesn’t end with Bloodlust, as there is a new CG series in the works tentatively titled Vampire Hunter D: Resurrection. As of this writing not much is known other than it’s a CG-animated series done in hour-long episodes. Kikuchi is no stranger to anime. Besides the classic Wicked City mentioned in the article, his first novel Demon City Shinjuku was made into an OVA in 1988, A Wind Named Amnesia was adapted in 1990, and one of my favorites, Darkside Blues, one of Kikuchi’s dips into the manga world, was animated in 1994. Darkside Blues is especially interesting as it’s a low-key horror anime that’s fantastically animated and features a jazz soundtrack. Sadly out of print, this one is worth tracking down. 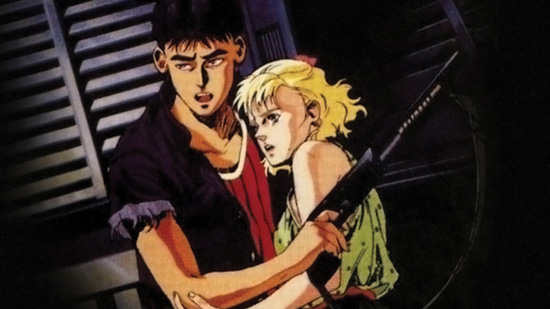 Take a pound of Aliens, a sprinkle of The Thing, and a dash of Terminator and you’ll have Lily C.A.T. Employees of a mining company are on a 20-year sleep for a mining survey, and during the long sleep, something is picked up by the ship. As if that wasn’t enough, there are two people on board who are not who they claim to be. People are picked off one by one as mysteries and terror abound on a ship headed up by a captain who looks an awful lot like Abraham Lincoln.

Directed by Hisayuki Toriumi—best known as the director of such classics as Gatchaman, Mysterious Cities of Gold, and Area 88—and with character designs by a veritable dream team of anime artists, including Yoshitaka Amano (Final Fantasy) and Yasuomi Umetzu (Mezzo Forte, “Presence” from Robot Carnival), Lily C.A.T. may be the most familiar of any horror movie on this list to those who are more experienced with American horror. The one-shot is being re-released by Discotek with the Japanese language version available for the first time along with the original Streamline dub. 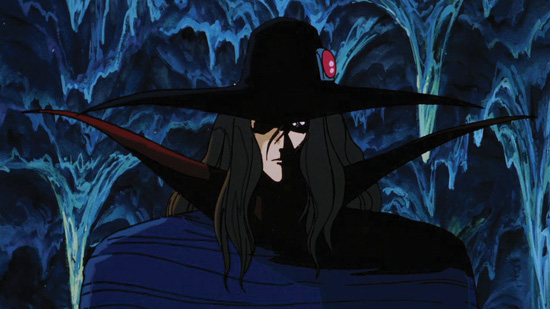 Vampire Hunter D stands as one of the most graceful combinations of science fiction, action, and horror in one long-running series of novels written by Hideyuki Kikuchi. The basic premise of Vampire Hunter D is that the world of 12,090 is not a great place. This world is ruled by wealthy vampires, and it’s D’s job as a half-vampire, half-human dhampir to hunt them down. D himself is the almost-always-silent protagonist with a very talkative left hand (you should see it for yourself). The series is probably best compared to a Western; replace Clint Eastwood with D, his left hand with a talkative sidekick, and the vampires with whomever is terrorizing whatever town he happens to be passing through.

While excellent, Vampire Hunter D shows its age. The movie is from 1985 and looks it, which is not to say it doesn’t have some beautiful animation. Character designs are by previously mentioned Yoshitaka Amano of Final Fantasy fame, however the budget of the film has a hard time capturing his flowing, beautiful style. Director Toyo Ashida is best known as the director of Fist of the North Star and some of that ultra-violence makes its way into this work with some memorable action and gruesome monsters.

Considered a classic of anime and with good cause, Vampire Hunter D has been licensed and released on Blu-ray by Sentai Filmworks, complete with a new dub. 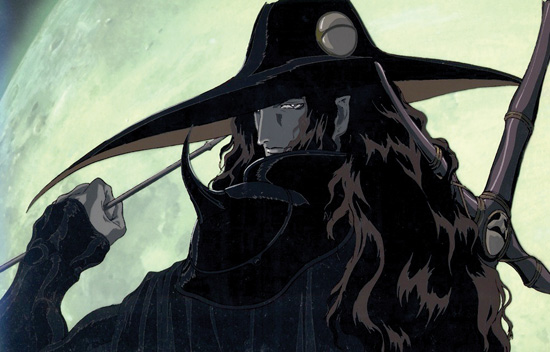 If it were possible to frame an entire animated movie and put it in a museum, Vampire Hunter D: Bloodlust jumps to the top of the list. Released in 1999, Bloodlust is one of the last great triumphs in hand-drawn cel animation, every moment of which shows the greatest skill and attention to detail.

D is hired to find Charlotte, a girl who was kidnapped by Baron Meier, and bring her back safely, or, alternatively, kill her humanely. He’s in a race against human vampire hunters the Marcus Brothers and whomever finds her first gets a hefty reward. The Marcus Brothers are accompanied by a group full of members with their own unique powers and abilities.

To describe any more of Bloodlust would ruin some of the excellent twists the story takes. This is one that should be in every anime fan’s collection were it not for its absence of availability for over a decade. Created by Madhouse in 1999 and released by the defunct Urban Vision, Vampire Hunter D: Bloodlust was long out of print until Discotek recently announced its license and release on both DVD and Blu-ray. Trust us, you WANT to see this in high definition. 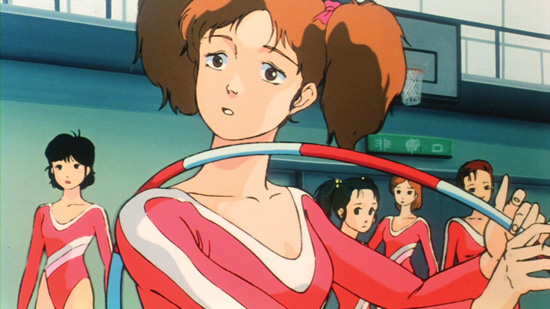 Urotsukidoji: Legend of the Overfiend (1987)

Urotsukidoji is a work whose legend precedes it. A long, complex, and VERY adult work of horror by one of the masters of adult manga, Toshio Maeda, Urotsukidoji is the story of the end of the world. Every 3,000 years marks the appearance of a chojin, a super being that can unite the human, demon, and human/beast hybrid worlds. It becomes the job of Amano Jyaku, one of these half-beast, half-humans, to find this chojin who is hidden in the body of a human, unite the three worlds together, and bring about peace and harmony, or at least that’s the idea.

Urotsukidoji may be the best known adult anime in the world, save for, perhaps, Bible Black (kids, don’t look that one up). Originally a three-part story, the series proved popular enough to be expanded into multiple series and was remade in the early 2000s simply as Urotsuki. If you’re an adult and are willing to go into the bowels of hell to experience this, it’s only necessary to watch the first three episodes. The second series, consisting of two episodes, is that rare “IN-quel” taking place between the first and last episode.

Ask old-timers about Urotsukidoji and they’ll probably get angry that you brought it up since this series is responsible for giving anime the “naughty tentacles” reputation it had for so long. Ignoring its reputation, the series is an involving and complex story with multiple twists and an ending that is quite a downer. Only for those with an ironclad stomach, Urotsukidoji is something that one must experience if they think they can handle it.