Wicked City: A Look Back 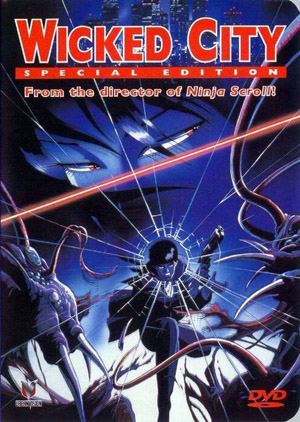 In light of Funimation’s re-release of the TV series X, directed by Yoshiaki Kawajiri, we decided to look back at his classic film Wicked City, as well as Kawajiri’s early work.

Released in Japan in 1987, Wicked City (or ‘Supernatural Beast City’ as it had been commonly known in the 80s) was the second feature length piece Kawajiri worked on as director. It was based on a horror novel by Hideyuki Kikuchi about life in (at the time modern) Japan in the shadow of a tenuous treaty with a dimension of monsters.

The film opens with our lead character Taki Renzaburu giving a summary of Earth’s treaty with a horrific parallel dimension called The Black World. The treaty has remained intact for hundreds of years and must be renewed periodically, which radical members of the Black World don’t want. To maintain the peace against the radicals on either side, there are the agents of The Black Guard, of which Taki is one. However, on this night Taki is having a nice rendezvous with a woman he’s been eyeing for a while. They consummate the evening’s activities before she reveals she’s a black-worlder who came to enjoy a night with Taki and is apparently the inspiration for the U.S. independent film Teeth. Yeah… it’s quite an image.

As the movie goes on, Taki finds he is to be assigned guard duty for Giuseppe Maiyart, a small (and rather lecherous) wizard who is to help complete the treaty. Taki is also given a partner from the black world, a beautiful woman named Makie who has a few special abilities to help fight the various monsters. Being human, Taki instead has to rely on regular fighting skills and a gun that’s seemingly the equivalent of an  .88 Magnum (goes through schools), but he gets the job done. 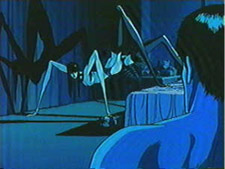 The movie plays out like a crime noir story mixed with horrific imagery. Scenes usually take place in the nighttime atmosphere with slight mixings of semi-jazz and moody themes for the proper effect of creepiness and mystery. There’s little doubt as to the mentality of the scriptwriters since the male creatures sometimes turn into powerful beasts while the females… can become too much woman for just about any man to handle. Also, there are points where it seems the writers stayed up nights thinking of ways to abuse Makie, but she does get to account for herself eventually. Still, there are many sexual overtones throughout, enough that one might mistake the film for hentai. But it’s not; it is a pretty entertaining story of people fighting monstrous evils in dark times, and it ends in a rather interesting place when all is said and done.

When Kawajiri worked on the initial cut of this film, it was a 38-minute short piece and very different from his first directorial effort, SF New Century Lensman (based on the American sci-fi novels of the 1930s). Although the characters moved intricately and he’d put an innovative computer animated sequence into Lensman, Kawajiri decided to go a different direction with his future films, employing high contrasts, dark overtones, slick movements and crisp character designs. Kawajiri first utilized these techniques in a short segment of the anthology film Manie Manie: Labyrinth Tales. The film was re-titled Neo-Tokyo and given a brief U.S. theatrical run by Streamline Pictures, who did the same with Wicked City. The Running Man was also seen in the ’90s on MTV’s experimental animation series Liquid Television. 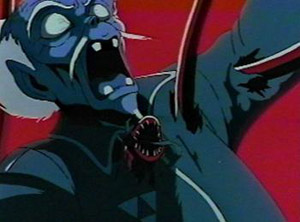 And so, when the producers who hired Kawajiri saw his first cut, they were very impressed and knew they potentially had something special enough to ask him to extend it into a feature-length film. The film became very influential in terms of art design and in helping to establish one of several art identities for Madhouse Studios, as fans often associated dark, gothic works with the company and other studios began to release more horror anime OAVs.

Kawajiri would go on to practically paste the general look of his films on horror works such as the follow up Demon City Shinjuku, as well as his cyber crime noirs Midnight Eye Goku and Cyber City Oedo 808. Kawajiri would return to Kikuchi’s writings for a second film adaptation of the Vampire Hunter D novels (entitled Vampire Hunter D: Bloodlust in the U.S.).

Wicked City was last released as a special edition R1 DVD by Urban Vision, which included the Streamline Pictures dub, special features and interviews with director Kawajiri. As of press time, there has been no announcement of a new release for the blu-ray format.