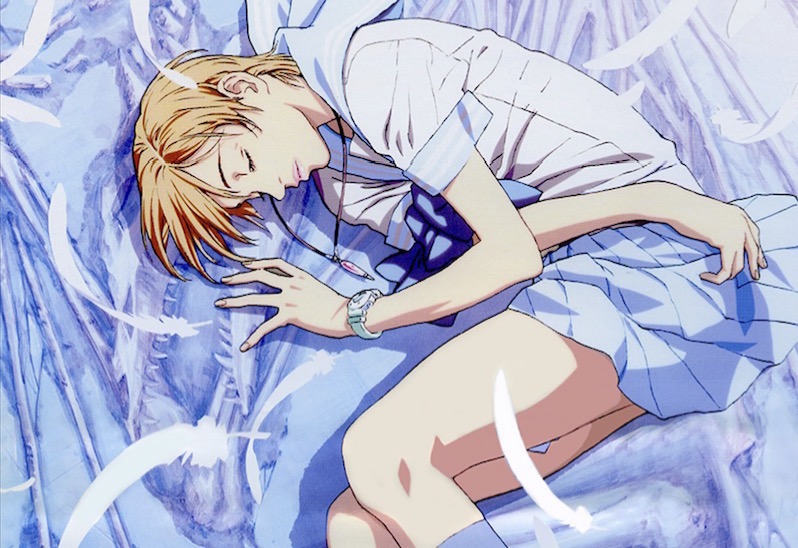 In the new issue of Anime USA—on newsstands and available to order now!—we dig into a real anime classic: The Vision of Escaflowne. By today’s standards Escaflowne is downright ancient, but its magical tale of fate, mechs, and a far-flung world at war still holds up nicely. And then we have Escaflowne: The Movie, which is an entirely different, absolutely gorgeous beast.

Escaflowne: The Movie asks the question, what if Escaflowne were the same… but completely different? What if it were darker and more violent? A horse straight up EXPLODES halfway through the film, but the very first frame is enough to let you know you’re in for an all-new trip to Gaea. 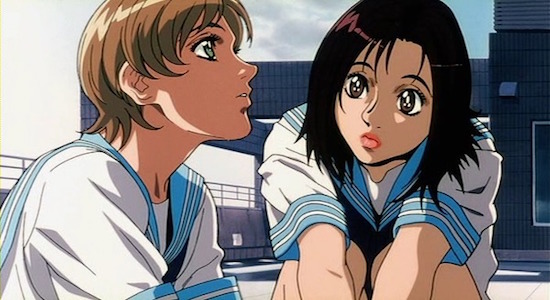 In one of the TV series’ extras, mastermind Shoji Kawamori mentions that there are typically two options available when developing an anime film based on an existing series. You can either create a digest, or compilation film, or you can tell an entirely new story. Escaflowne: The Movie opts for a third option, retelling the original story in the context of an alternate universe. Most all of the characters we know and love are present and accounted for, but they’re not exactly the same as we left them. It’s kind of like having a dream about all your friends but there’s something off about each and every one of them.

For starters, Hitomi is terribly depressed at the beginning of the film, even going so far as to draft a suicide note of sorts for her friend Yukari. Missing, or at least kept off-screen, is her pining for fellow track team member Amano Susumu. Despite Yukari’s ribbing—which either makes Hitomi’s depression seem less serious or the butt of a drawn-out joke—Hitomi’s mental state is presented as rather bleak, to say the least.

Thus, her magical transportation to the world beyond, Gaea, is even more of a prophetic escape from reality. It’s there that she immediately runs into Van Fanel, who is much more ferocious and bloodthirsty than he is in the TV series. His early action sequences are the first showcase for the greatly enhanced violence of the movie. Van’s character design tweaks are subtle but immediately noticeable, mostly due to the distinct armor plating he has on one arm. As he uses the plated metal to guard, he puts the rest of his strength into slicing through torsos and chopping heads with a buttery-smooth immediacy. 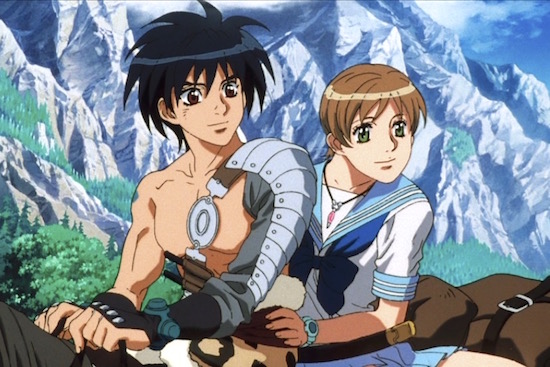 All of the character designs are much more realistic in Escaflowne: The Movie. I mean, at least as realistic as lion-headed dudes and cat girls can possibly be. Gone are the Zaibach Empire’s invisible-cloak-wearing Guymelef mechs. As imposing as they were in the series, the condensed running time of the movie makes a more intimate showdown necessary. While we wait most of the running time for Escaflowne to take center stage, director Kazuki Akane and co-writer Ryota Yamaguchi opt to leave Zaibach’s sole giant robot in the hands of resident wild card Dilandau.

The big battle between Dilandau’s Guymelef and the Van-piloted Escaflowne is worth the wait. Escaflowne is much more intimidating and mysterious in the movie, and its connection to Van is violent and painful. Where the TV series inflicted pain on Van for every wound Escaflowne received, the movie makes the entire piloting experience one blood-spurting exercise in agony. Escaflowne: The Movie is a counterpoint for anyone who thought piloting a giant, knight-like mech might even be a little bit fun. It’s beautiful and savage, which is a decent way to sum up the movie as a whole. 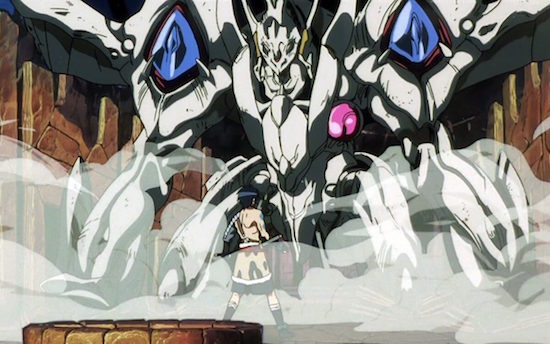 It all barrels at a breakneck pace toward, bizarrely enough, a straight-up psycho-kinetic battle between Van and his older brother, Folken. The only real downside is there simply isn’t enough time for the right amount of character development. This can put a damper on some of the more important moments. Those who haven’t seen the series won’t care as much about the plight of those in Gaea, and those who have will wonder how much of the TV show’s lore not shown on screen actually carried over into this retelling.

Does that matter in the longrun? Not really. Escaflowne: The Movie is a 95-minute visual spectacle that carries just the right amount of the original series’ essence along with it. If you plan on watching both, do yourself a favor and watch the TV series first. It’s the best way to appreciate all the changes made for the theatrical version, and it gives you a chance to just sit back and stare at the fantastic animation. Speaking of which, Escaflowne: The Movie looks great on Blu-ray. Funimation’s release lacks notable extras, but it’s good to have it back on home video.