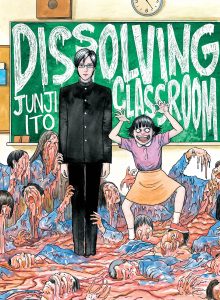 Junji Ito’s horror manga are always good for a Halloween read, and his Dissolving Classroom is a quirky, absurd and sometimes gruesome romp with two devilish siblings.

It starts with transfer student Yuuma Azawa apologizing profusely to his new classmates, even though no one understands what he has to apologize for. Yuuma continues to apologize — loudly, sweatily and constantly. His classmate Keiko Arisu feels sorry for him and tries to be nice, but she just gets swept into his crazy world.

Yuuma claims all his problems stem from his little sister Chizumi, whom he insists is possessed by a snake. Chizumi is creepy with bloodshot eyes, a menacing smile and a serpent-like tongue.

But Chizumi insists that the reason they’re cursed is for a different reason — because Yuuma summoned the devil by sacrificing animals. Whatever the origin, there is clearly evil involved. Whoever is around the siblings for too long will inevitably have their brains melt . . . and then the rest of their bodies. The melting looks the way it does on the front cover: grotesque, sticky and over-the-top.

Keiko is in the first story, then the book veers off into a few other stories where the gruesome siblings invariably cause horror and melting wherever they go. Then Keiko returns, connecting the stories. There are a few jumpy moments, but as opposed to having outright scares, most of the horror here is in the absurdity of the situation and characters’ powerlessness against it.

Junji Ito has a true skill for horror, which he’s shown in everything from Uzumaki to Venus in the Blind Spot. It’s a chilling pleasure to read, and perfect for the Halloween season.

Catch the Latest Season of Is It Wrong to Try to Pick Up Girls in a Dungeon? on HIDIVE!
My Broken Mariko Wins The Bros. Comic Award 2020