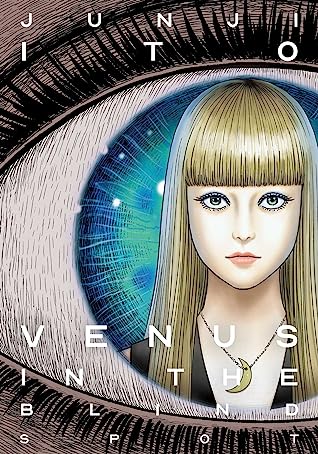 Junji Ito is one of Japan’s best known horror manga creators, and anyone who reads Venus in the Blind Spot can see why. This collection of short manga stories highlights his artistic and storytelling talents, showing how he can give you delicious chills and keep readers turning the pages.

Venus in the Blind Spot consists of ten stories, some of which have colored pages, and it has several mini-posters at the front of the book. The opening story, “Billions Alone,” shows a hikikomori who might actually be safest hiding in his room, because someone or something is mysteriously killing groups of people and sewing them together. “The Human Chair” and “An Unearthly Love” are both impressive manga adaptations of Edogawa Ranpo’s work, and “How Love Came to Professor Kirida,” based on a story by Robert Hichens, has such detailed, great art that it’s almost mind-blowing.

“Venus in the Blind Spot,” the titular story, is more of a science fiction tale, but the horror angle also shows itself here. “Master Umezz and Me” is an autobiographical story of how Ito became enthralled with horror master Kazuo Umezz’s work, including Cat-Eyed Boy and The Drifting Classroom. This is a really fun look into the mind and upbringing of Ito. “The Licking Woman” is the most gruesome story, where a woman with a long, incredibly detailed and disgusting tongue can kill people by touching them with it. But Ito can also show beauty in his artwork, even when it’s about terrifying subjects. “The Enigma of Amigara Fault” is successfully claustrophobic in its storytelling, “The Sad Tale of the Principal Post” is almost gag in its absurdity, and the final story, “Keepsake,” is both taboo and chilling.

Venus in the Blind Spot is a solid short story collection and highly recommended to fans of Junji Ito and horror manga in general.