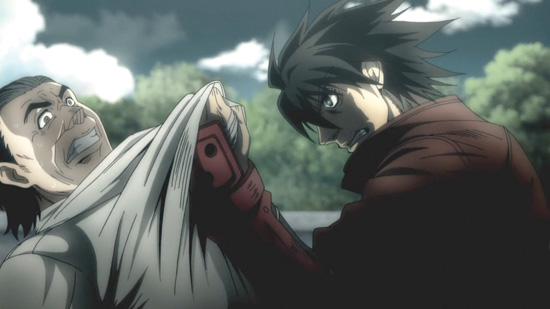 It feels as if the latest anime based on the manga of Hellsing creator Kouta Hirano has been a long time coming, but maybe we’ve just been particularly thirsty for something this ridiculous. From the very first scene, Drifters is as gleefully violent and over the top as you might expect, and the war within will have you leaping back and forth between your favorite side. It’s the Drifters versus the Ends in a battle of historical pawns, and fans of generations-spanning action will want to stick around through the bitter end.

That’s right, Drifters is appropriately billed as a “battle in a brand new world war!” and it delivers on that promise. For warrior Shimazu Toyohisa it all begins during the Battle of Sekigahara, during which he manages to overcome intense odds and deliver a fatal blow to Ii Naomasa. This major victory doesn’t come without a painful cost, as Shimazu leaves the battlefield with some nasty wounds himself. Before he knows it, though, he’s stepping away from the blood-soaked grounds of Sekigahara and into a sterile white corridor full of doors. Smack dab in the middle is a bespectacled man sitting behind a desk, and before Shimazu can get an answer to what the hell is going on he’s promptly sent out an adjacent door. 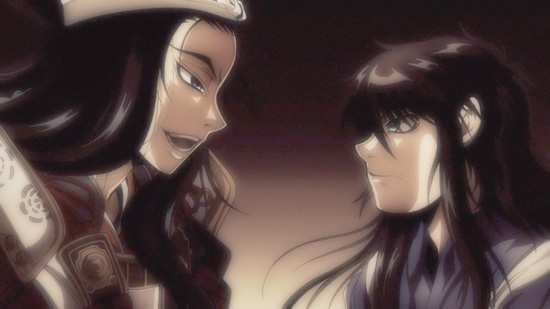 This early moment is a Matrix-esque reality check that sets the rest of the series into motion. As Shimazu and the audience soon learn, he’s one of many figures ripped from history and thrust into a strange new fantasy world. He quickly runs into historical figures like legendary warlord Oda Nobunaga and young military commander Nasu no Yoichi, all of whom are part of a group known as Drifters. Together they and the rest of those assigned to this side of the battle must help the denizens of this fantasy world fight off the encroaching threat of another group called Ends.

Of course, Ends are also made up of a bunch of characters whisked away from various points in history, and just because they’re on that side doesn’t necessarily make them evil. Again, these are historical pawns, so Drifters is basically like someone interfering with a tabletop role-playing session using a who’s who of civilizations past. The best part about the series’ hook is the fact that you can have figures from ancient Greece and feudal Japan duking it out on the battlefield between mighty orcs and goblins, only to have the fight interrupted by the sudden appearance of a World War II fighter plane. The pilot’s discombobulation paired with the sudden excitement of gunning down actual dragons pretty much exemplifies the positives of the series as a whole. 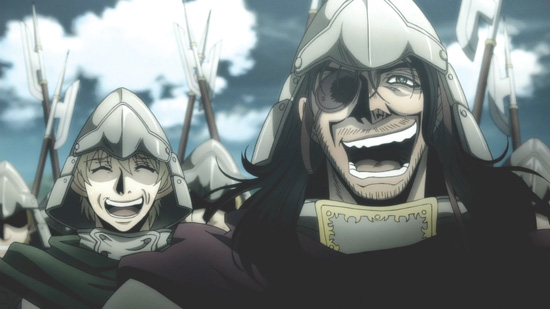 Drifters has its own unique visual style, and if I had to compare it to anything it would be David Production’s JoJo’s Bizarre Adventure anime. It has that thick-lined, dramatically shaded aesthetic that makes it look more like a motion comic at times, and that’s not a dig at the animation at all. As fun as all of the gory action is, the ultimate test of Drifters will be how it handles the bubbling intrigue behind the scenes of the Drifters-versus-Ends conflict. Hirano’s manga is still running in the pages of Shonen Gahosha’s Young King OURs magazine, with just five volumes collected in total, and if anything this slice of animated war has me hungry for more. Recommended.