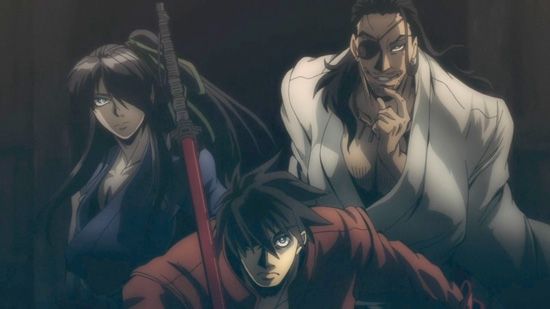 Whenever I watch Drifters: Battle in a Brand-New World War, that opening exchange from 1985’s Rambo: First Blood Part II comes to mind. It’s a top-rate action movie, hugely influential on film and video games (you’d have no Metal Gear without it), but it’s also steeped in a fantasy of “we didn’t REALLY lose Vietnam, our soldiers would’ve WON except for…!” For Drifters is the new major work from the mind of Hellsing creator Kouta Hirano, whose works embody the purest, darkest, rawest id of modern Japanese otaku-dom for all the wonder and terror that implies.

Figuring out what Drifters is actually about takes a few episodes, though this is something you watch for the grand spectacle of its action above all else. Still, if you prefer to be kept in the dark, skip the rest of this paragraph. Noteworthy warriors throughout history are, just before the moments of their deaths, transported to a high fantasy realm of elves, dwarves, dragons, and magic by a mysterious entity named Murasaki who by all appearances is … a stereotypical middle-aged Japanese salaryman. 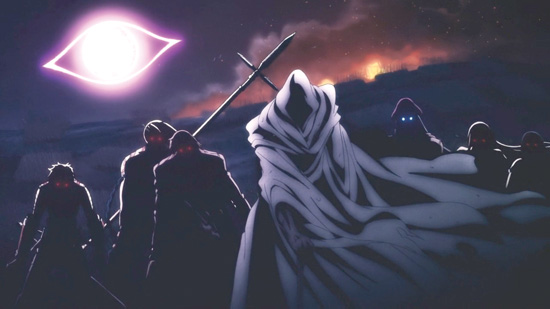 Known as “Drifters,” this unruly lot of Kouta Hirano protagonists—generally wild and impetuously fearless, in carrying on the spirit of Go Nagai’s heroes from the 1970s—must rally together and assemble a military force to do battle with the “Ends,” who are other noteworthy historical figures that have been similarly plucked from the time stream and reborn with superhuman abilities thanks to a seemingly teenage girl referred to as “EASY.” Such Ends include Joan of Arc, Rasputin, Anastasia, and Akechi Mitsuhide (the man who betrayed Oda Nobunaga).

That’s all it takes to get the ball rolling for the mayhem to unfold, and if anything is to be said about Kouta Hirano, it’s that he understands that if you’re going to offer up such a premise then you’d better realize it to its absolute fullest potential. Drifters gives us a cornucopia of otaku delights: battles between samurai, medieval knights, dragons, fighter planes, wizards, cowboys, elven archers, battleships, and more unfold throughout its running. The production looks and sounds stupendous. 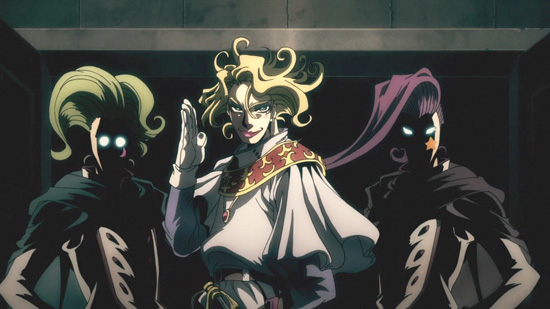 I was personally always split between Hellsing TV and the OAV series Hellsing Ultimate. The TV show had much better music, but the direct-to-video retelling looked vastly superior and ramped up the violence even further. With Drifters they seemed to have listened to my wishes or perhaps taken the series premise to heart by offering the best of both worlds, as the animation style and fluidity are comparable to Hellsing Ultimate while having Hellsing TV composer Yasushi Ishii handling the music.

That combined with top-notch directing by Kenichi Suzuki, last seen directing the first three parts of Jojo’s Bizarre Adventure TV (that’s Phantom Blood, Battle Tendency, and Stardust Crusaders) means that it’s no surprise Drifters is among the hottest simulcasts of Winter 2016. It’s a wonderful display of bloody decapitations and guitar riffs—anime’s peanut butter and chocolate—and the broadcast version isn’t heavily blacked out or otherwise censored the way titles such as Terra Formars was. 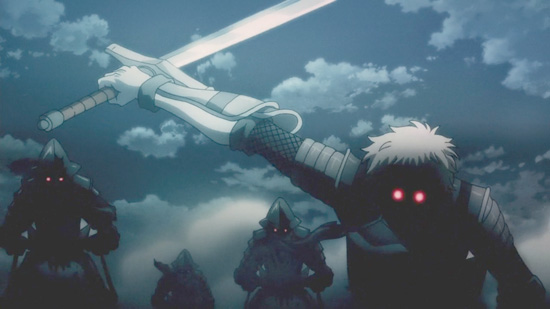 The blessing that is Kouta Hirano simply having no filter whatsoever is that he doesn’t even bother to draw a line to avoid crossing. Its flagrant rebelliousness speaks to the angry teenager within us, the kind who wants to shock the “normal” people and tell their parents to shut up already. But that’s also his curse. It’s one thing to SAY “we’re attracted to Japanese animation because it’s entertainment produced by a First World country that isn’t explicitly Western in its value set,” but just how far exactly are you willing to take that?

Sure, it’s no big deal that the main character is decapitation-obsessed Toyohisa Shimazu, an actual samurai who lost his life at the famed Battle of Sekigahara, which nobody in America is taught about in school such that all we know comes from Sengoku Basara or Samurai Warriors. Nor will anyone in the US bat an eye that one of the main Drifters is gunpowder-obsessed Oda Nobunaga. After all, Japanese otaku love to put Oda Nobunaga in EVERYTHING. In this series, he’s basically Alucard during the parts from Hellsing before he decided to dress up like Captain Morgan, screaming about conquest and atrocities when he’s not sexually harassing Olminu, a sorceress who exists solely to deliver exposition and be leered at for her large breasts. In other words, Nobunaga is Kouta Hirano’s self-insertion character. 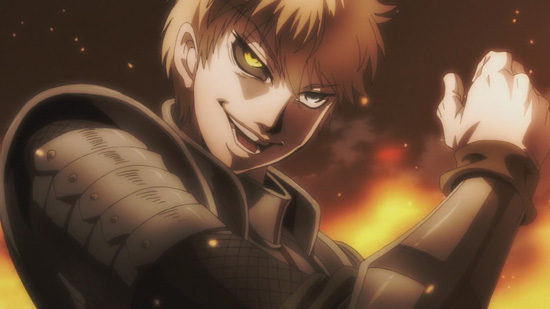 But some of the other “great Japanese heroes” could hit a nerve. Tamon Yamaguchi was admiral of the naval aircraft carrier Hiryu, and he’s best known for bombing Pearl Harbor and fighting in the Battle of Midway. He too is back and ready to fight, and this time he can WIN! The seemingly un-aging Comte de Saint-Germain, a semi-popular figure for anime historical fiction works, is depicted here as a flamboyant drag queen who upon being transported to this new world befriended this one guy with a funny mustache, whom the series praises for being a military genius. Upon being transported to this fantasy realm, this charismatic leader inspired the populace to form a vast empire that subjugates the other races.

As a blood-soaked story about heroes kickin’ ass, I enjoy Drifters: Battle in a Brand-New World War. Still, there are caveats. This is a series where even the “good guy” Drifters are bad and they’re fighting against even worse foes who commit atrocities such as rape, genocide, and other war crimes … which is often played off as a joke or otherwise of little consequence when it’s pointed out that hey, Oda Nobunaga or whoever did the same things themselves. And they are all “guys” since the women in this series are either villains, pure fan service, or both at once. Whether this bothers you or doesn’t, you probably want to acknowledge these things before you decide to show Drifters to other people, especially non-otaku who may not be as open to rationales such as, “Well, Japan WAS Germany’s ally in World War II …” or “well, Japan isn’t a christian nation …” (see sidebar). But you can still acknowledge this stuff is there while liking it. You know, like Rambo!

Drifters: Battle in a Brand-New World War is available from Crunchyroll and Funimation. 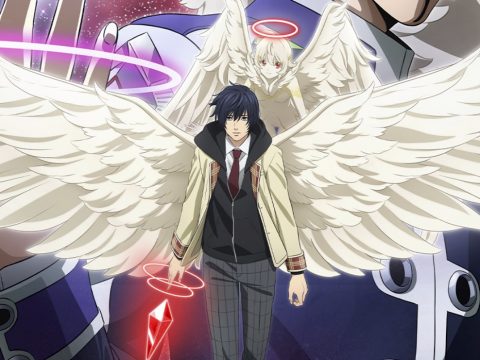