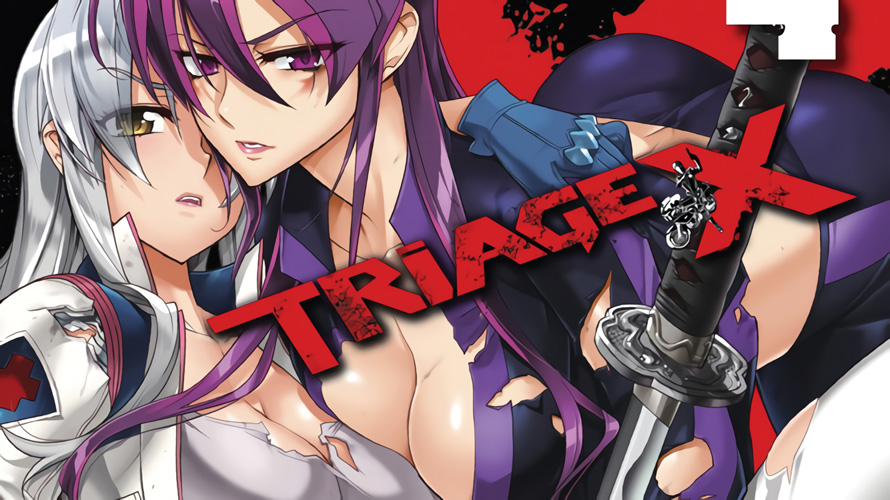 If you take a look at the cover of Triage X… yeah, it gives you a pretty good idea of what to expect inside the manga.

I mean, Triage X does have a plot, and it does have some good, exciting action sequences. It’s not straight fanservice and nothing else. However, there is a lot of fanservice, and it’s all fanservice geared toward men. Case in point: the opening panel is a close-up of a ridiculously endowed woman’s chest with a bikini top that barely fits. (I think this made some of you stop reading and other people went out to buy this title.)

Okay, so the fanservice was a tad distracting (and was that shower scene necessary?), and I’m not the right audience for it, but let’s move on to the story. Mochizuki General Hospital has doctors and nurses doing some extra work. Like your typical doctors and nurses, they’re concerned with fighting cancer, but to them, cancer can mean people. They take the term “cancer of society” as something literal, and believe that cancers of society need to be destroyed just like cancers of the body. This title wasn’t just shrink-wrapped for its sexy side: it also has adult-level violence, including torture scenes that made me very uncomfortable and plenty of spurting blood. 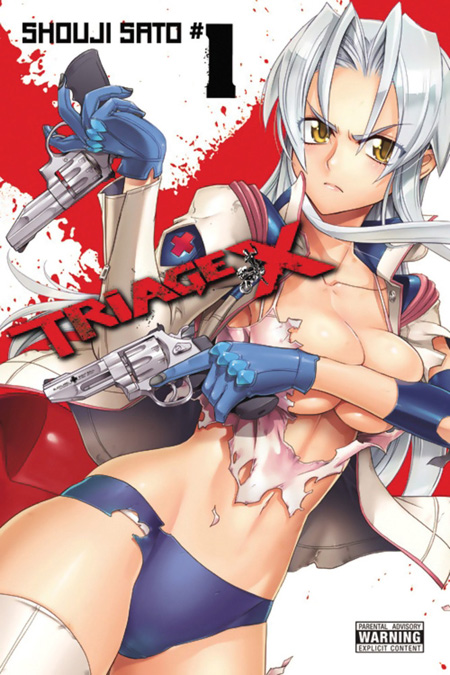 In the midst of the slam-bam action we’re introduced to the various characters, though we get to know Arashi the most. He’s a high school student, but his past has him tied to the hospital director, and he joins the nurses when they go after the bad guys. But this is definitely vigilante work, because everyone involved knows that what they’re doing is highly unorthodox and could get them into a lot of trouble.

There’s some implication of moral struggles and talk of conscience, but mostly Triage X is in it for guilty pleasure entertainment. I’m guessing this description can probably give you a good idea of whether it’s your type of guilty pleasure or not, because this is definitely not a title for everyone. This wasn’t my kind of guilty pleasure, but I know it will be for others. Otaku might already recognize the name Shouji Sato from his work as the artist of Highschool of the Dead, and with Triage X he works as both the artist and writer. There aren’t any zombies, but there’s still violence and panty shots.