It’s the calm after the storm with this week’s new title list. It looks considerably shorter than the beautiful behemoth of books we’ve seen in recent columns, doesn’t it? But book quality over book quantity! Seven Seas and Viz Media are dishing out the individual page counts and the mature reading options with their trio of titles.

Seven Seas’ release is their first omnibus edition of Kanokan. This book collects the original volumes one and two, putting it at almost 400 pages. This is the first time the manga has been released in English, but some may recognize it from the anime adaptation released by Media Blasters a few years ago.

Kanokan’s lead is a young man named Oyamada Kouta, who has just transferred to a new high school in the big city. He doesn’t seem to have the usual new kid problems, when almost immediately he’s handed a love letter by one of the school’s most beautiful second years. Life can never be that smooth for a teenager, though, and continuing his trend of being an average guy living a not so average life, Kouta learns that his busty pursuer is actually a fox spirit—a supernatural trait she shares with many of their fellow classmates.

Viz Media’s brand of teen drama this week is very different, however. Bokurano Ours is a great series but one I’ve always had trouble reading because of just how well it can get across the sheer sense of fear and despair. For those unfamiliar with it, Bokurano Ours follows a group of kids who are tricked into a playing a ‘game’ where they take turns piloting a giant machine to save the world. The results of their victories are rarely much better than their losses. 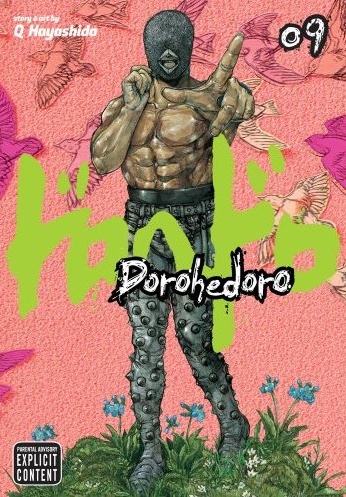 Since the beginning, the kids have always fought this battle on their own and the machine they’re forced to wield has been seen by the world as a danger. That looks like it’s about to change here in Bokurano Ours (Vol.08) when one of the children uses her Father’s media connections to send out a message to the population.

Then in Dorohedoro (Vol.09), things are darker still—and not safe for the kiddies, readers!—as Caiman finally learns more about his origins, but to mentally scarring effect. You really do have to be careful what you wish for, especially when you’re a man cursed with a spiky lizard head, which Caiman is… right? Elsewhere it’s wax dolls, murder cover-ups, devils and grave digging—just your average crazy day in the world of Dorohedoro.