Hello again, Otaku USA readers! This week’s On The Shelf comes with some good news and sad news. The sad news is that this will be the last On The Shelf article here at Otaku USA. I’ll miss sharing the week’s new manga here, but certainly hope everyone keeps buying, sharing and spelunking for new goodies. Thanks for joining me as Otaku USA and I explored weekly releases for the past ninety-three Wednesdays!

The good news is that On The Shelf is going out with a bang with one of the longest shipping lists yet – enjoy! 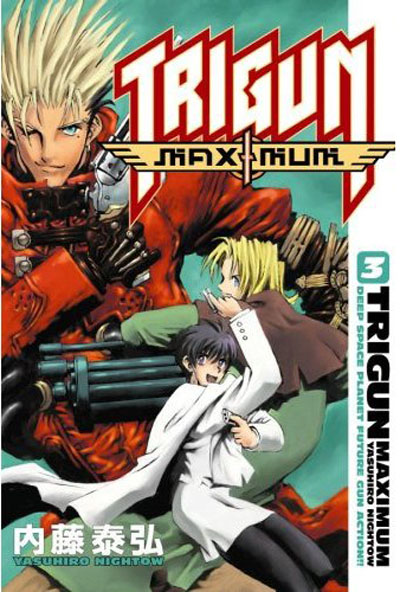 Dark Horse is releasing a lot of manga in a deceptively small package with Trigun Maximum (Vol.03). At over 600 pages, this third omnibus volume dives us deep into the conflict between Vash and his brother, Knives, who is hell-bent on bringing destruction to planet Gunsmoke. If you’ve only ever thought of Trigun as a gun-slinging comedy, the contents here are a prime example of the high stakes and drama that played a huge role in the success of Yasuhiro Nightow’s most popular work.

Kodansha Comics’ release of Attack on Titan (Vol. 05) is a sweet torture. This is an amazing manga series for its entrancingly disturbing story, and the currently running anime is one of the best I’ve seen in years. The animation! The music! The horror! And the suspense… the suspense that would be ruined if I were to read ahead in the manga. Do I find out what happens next now, or wait and see it via the anime? Tough choice! Currently the anime has shown the story up to the end of volume two. For those following the manga, this fifth book sees the fate of the town of Trost, and what it means for Eren after focus falls to his transformative abilities and the secrets contained in his Father’s basement.

Going in reverse on the anime and manga spoiler order, Kodansha Comics is releasing the first volume of No. 6. While initially based on a light novel, those familiar with the series were likely first introduced to it via the anime that premiered in the summer of 2011. This series was a hit with boys’ love fans, but don’t be fooled by fandom that this is a romance series. No. 6 follows a young man named Shion whose life inside a utopia is turned inside out when he shelters a convict named Rat, and inadvertently becomes embroiled in the man’s life and learns the harsh reality of the world he’s called home.

And then there’s Sankarea, which sports a scary looking cover! And with a tagline like “I only like zombie girls!’, it suddenly has a different twist. This series is a different take on the zombie genre with its lead male character loving zombie movies out of a want to comfort and mourn the death of those poor, helpless zombie girls. When confronted one day holding a resurrection potion by one of the most rich and popular girls at his school, his mind races with the possibilities… 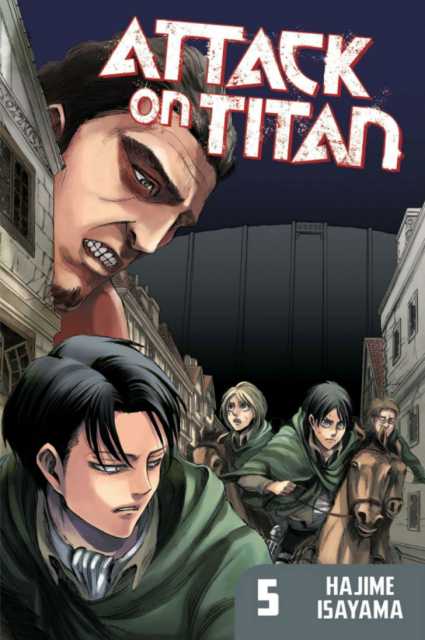 Seven Seas’ one-shot is one of my most anticipated from this week’s new books – Kisses, Sighs, and Cherry Blossoms Pink. This book collects fourteen short stories by the iconic yuri creator, Milk Morinaga. Her work Girlfriends was previously released by Seven Seas, and became one of their bestselling titles. For good reason, too! It was adorable, and heartbreaking, and totally mushy yet grounded romance with some really pretty artwork. I’m confident we’ll get more of the same with Kisses, Sighs and Cherry Blossoms Pink.

Viz Media has a big list of new books out, and we’re starting out by looking at their boys’ love imprint, SuBLime, which continues a series and starts something new. His Favorite (Vol.04) resumes a hilarious series about one below-average man’s struggles with being pursued by his school’s most eligible bachelor.

Things are more dramatic in Sleeping Moon (Vol. 01), where a man is thrown back in time while researching an ancient curse that brings an early death to the men in his family. Now back in the Meiji period, he meets another individual trying to find the same answers and together they seek the source of so many men’s fate. 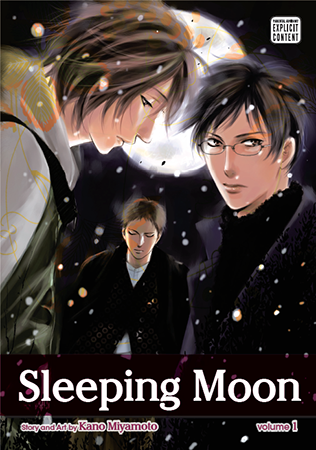 Vertical Inc provides the sci-fi today with Knights of Sidonia (Vol. 03), continuing the story of the universe’s last ‘humans’ as they fight to survive against a race of aliens intent on destroying them.

Then Viz Media steps up to bat with sixteen new volumes of manga. Each one is a continuation of many beloved titles, excluding one new series that resurrects an old fan favorite.

A Devil and Her Love Song (Vol. 09) is a welcome change of pace in a series that’s predominantly been about its lead, Maria, getting treated horribly. The events of this volume focus on happy beach adventures and musical recitals along with the integration of a new seeker of Maria’s affections, and Shin’s on-going debate about returning her feelings.

In Demon Love Spell (Vol. 03), all the boys in Miko’s school are suddenly falling in love with her, but it’s not for brutal honesty like ADaHLS’s Maria. It might, however, have something to do with sealing away the powers of an incubus, but who’s to say? While I told myself I’d never read another Mayu Shinjo work after Ai Ore!, I admit I’ve found this one pretty fun so far. 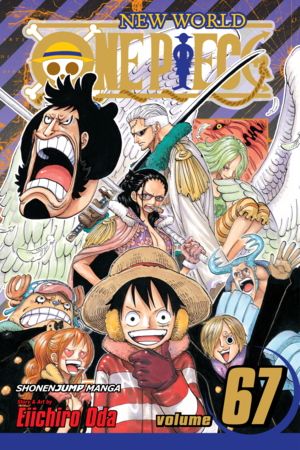 Elsewhere it’s a whole new world of the supernatural in One Piece (Vol.67). Luffy’s crew has reached the New World and they’re stunned by what they find there, creatures thought only to be legend and a sea full of islands that only a handful have dared to explore. Meanwhile, Toriko, Komatsu and Zebra are walking through pyramid halls that haven’t been explored in hundreds, if not thousands, of years in Toriko (Vol.16). Komatsu makes a discovery that could change the way the world sees food preparation, but if Toriko and Zebra don’t work together to win against a giant, cola-crying beast, then it’ll all be for nothing.

Viz Media’s volume one title is Rurouni Kenshin: Restoration which is a trip to the past for many readers. This manga was released to help promote the live-action Rurouni Kenshin film when it opened in Japan. It’s a condensed version of the original story starring the retired assassin, and now wandering swordsman, Kenshin. All the same action, heart and humor is there along with some really nice artwork. It feels odd but nice revisiting a series like this, one considered a classic among an entire generation of fans.

Then in Yu-Gi-Oh! Zexal (Vol.03), don’t let the silly names fool you because the stakes are high as Yuma finally manages to defeat Captain Corn, but he’s only one stepping stone in the war against Mr. Heartland, who is out to capture all the Number cards. Then in Skip Beat!, we’re reminded how show business can be even more cutthroat than a card game with the world’s fate resting on its shoulders. In volume thirty-one, new roles threaten to consume their actors if the pressures of their career don’t do it first.

That does it for On The Shelf – what on the list are you most eager to buy? Any must-have recommendations? Share your thoughts in our handy comment area for all our readers to see!