In After-School Bitchcraft, Ririka Kirise looks like a typical trendy kogal and hangs out with a gang of fellow gals at school. She harbors a secret ambition her party pals would never understand: to become a veterinarian. Too bad Ririka isn’t the brightest crayon in the box. One day, hoping to get extra help from her chemistry teacher, she bursts in on him performing magic. The teacher, Renji, is an outcast sorcerer who’s stunned when Ririka breaks through his magic barrier as if it doesn’t exist. It turns out Ririka is descended from an Irish witch and may be the most powerful wielder of Celtic magic in ages. 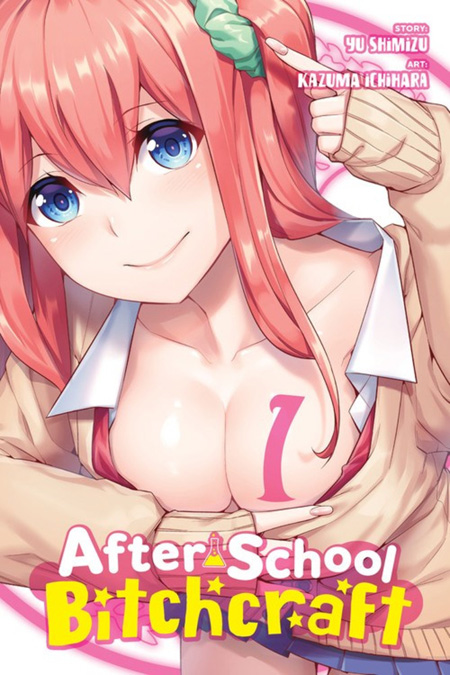 However, this setup is mostly just a pretense to get Ririka naked and put her in compromising situations with slimes, trees, and her teacher. The title After-School Bitchcraft might suggest a cheeky feminist tale of witchcraft and empowerment, but nope, it’s all panty shots all the time. And, unfortunately, Ichihara’s grasp of perspective and anatomy isn’t up to depicting the weird angles he twists his heroine into. More than one awkward panel seems to defy logic, physics and the limitations of the human body.

When Ichihara’s art focuses on the characters and story rather than panty shots, it works well enough. Ririka is cute, Renji is handsome, the backgrounds are serviceable, and the (possibly digital) inks smooth. After-School Bitchcraft‘s plot is dull and the fanservice often comes off as off-putting and inappropriate. Even when Ririka saves a kitten, she has to twist into an anatomically improbable position that makes no sense given what she’s trying to do.