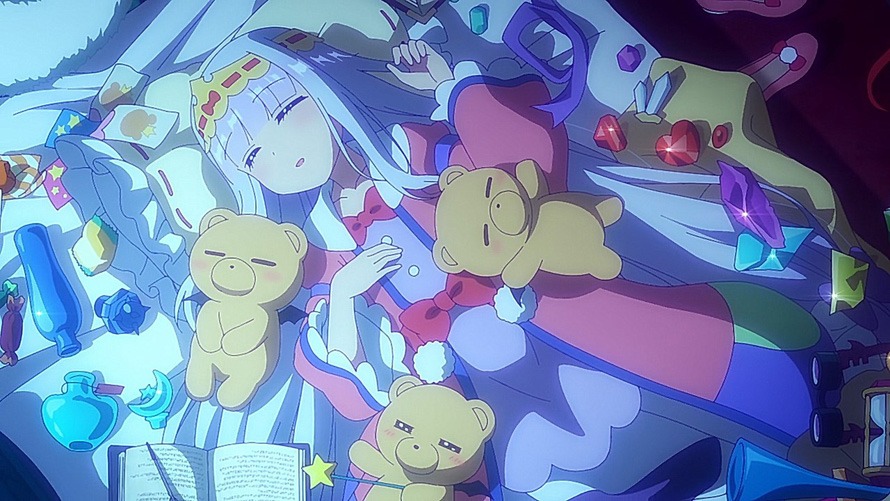 In the magical kingdom of Goodereste, humans and demons live side by side, but the harmony between these two peoples is shattered when King Twilight, the sovereign of Demon Castle, abducts the beloved Princess Syalis and takes her hostage within his dark domain. This betrayal prompts Dawner the Hero to embark on an epic adventure to rescue the Princess from captivity. This simple story-line should sound familiar to anyone who has played the Dragon Quest / Dragon Warrior game for the Famicom / Nintendo Entertainment System, because it has served as a springboard for countless anime, manga, and light novel series over the years. The primary difference with Sleepy Princess in the Demon Castle is one of perspective: the main character of this story is not Dawner the Hero, the mighty warrior battling through wilderness and dungeon to rescue the damsel in distress. Instead, the protagonist is Princess Syalis, the titular sleepy princess, and she is bored out of her gourd and willing to move mountains if it means that she can obtain a peaceful night’s rest.

Based on the manga by Kagiji Kumanomata, directed by Mitsue Yamazaki, and featuring animation production by Doga Kobo, Sleepy Princess in the Demon Castle is a Fall 2020 TV anime with exactly two jokes. The first joke is that the tiny and inoffensive Princess Syalis, in an effort to make her sleeping conditions more comfortable, constantly breaks out of her prison cell and rampages around Demon Castle. In her self-imposed quests to get better rest, Princess Syalis leaves chaos in her wake. She skins Ghost Shroud demons and weaves their gossamer pelts into bedding. She pillages the treasure vaults and transforms items of legendary power into sleep aids, turning a wind-generating shield into an air mattress and reading a forbidden spell grimoire in an effort to bore herself unconscious. She harasses the demon guards and drives Demon King Twilight batty with her inability stay put, but she’s much too cute and self-confident to scold. 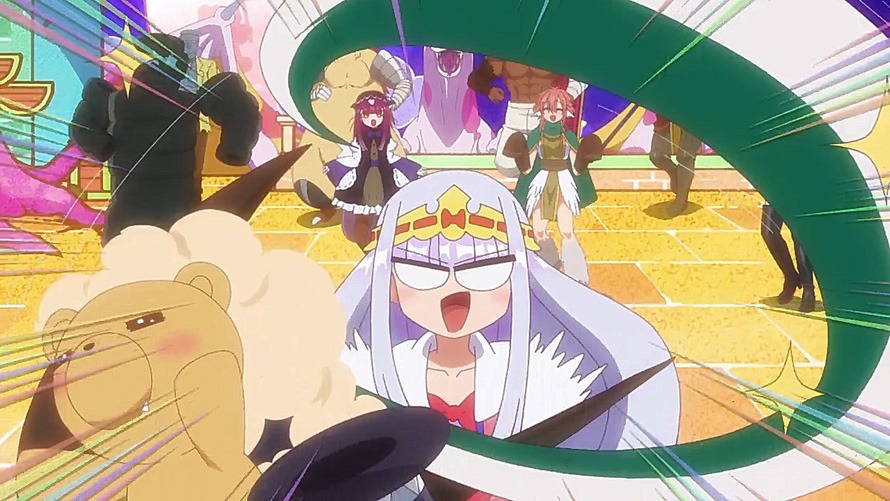 The second joke is that the tiny and inoffensive Princess Syalis, in the course of her rambunctious adventures, often meets with some sudden and gruesome demise. Demon Castle is an extraordinarily dangerous location filled with hidden traps, threatening wildlife, and environmental hazards such as unsecured bridges crossing rivers of molten magma. Princess Syalis is confident but clumsy, and she is cunning but not particularly bright. Her quests for comfort frequently yield fatal results, e.g. when she tests out a soft but toxic giant toadstool as a substitute mattress, poisoning herself to death as she slumbers. Whenever Princess Syalis dies, she leaves behind a cartoon tombstone, which the denizens of Demon Castle drag to the Demon Church in order to resurrect her.

Sleepy Princess in the Demon Castle only has two jokes, but these jokes are always well-executed, and Princess Syalis’s never-ending efforts to nap make for simple but effective entertainment. The animation by Doga Kobo is bright and cheerful, and the voice performances are fun, especially those of Inori Minase as the deadpan and determined Princess Syalis and Yoshitsugu Matsuoka as the increasingly flustered Demon King Twilight. The show’s sense of humor also travels to unexpected places. There’s an extended sequence in the first episode that alludes to the Clock Tower series of survival horror video games, right down to giving Princess Syalis the same animation tics as Scissorman as she stalks the halls of Demon Castle in search of soft materials for her bedding. It’s an odd choice, but doubly humorous if you get the reference.