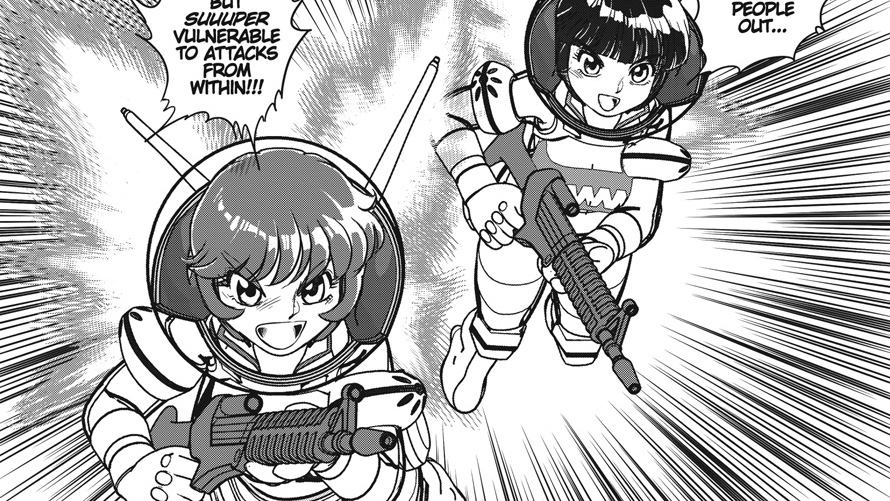 This 2010 Dirty Pair manga by artist Hisao Tamaki is a faithful adaptation of the original light novel by Haruka Takachiho. Revivals of 1980s pop culture are all the rage now, which suits me just fine. Though rooted in that era, the venerable Dirty Pair franchise continually overhauls its visual aesthetic to follow current trends. This omnibus is no exception, looking sharply distinct from the original 1979 light novel, the 1980s anime, and (if you count ’em) the American comics series by Adam Warren and the 1990s Dirty Pair Flash OVA series. 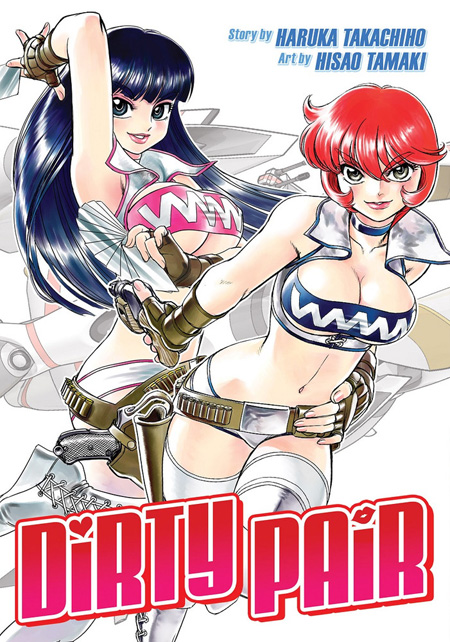 By the end of the 22nd century, humanity has colonized the stars. To help maintain order, the Galactic Federation has established the Worlds Welfare and Works Association, or WWWA—a reference to Japanese women’s professional wrestling back when the series was originally conceived. Seventeen-year-old bombshells Kei and Yuri are the “Lovely Angels,” trouble consultants dispatched throughout the galaxy by the WWWA to solve all manner of problems. Too bad they cause far more death and destruction than they prevent (relatable!), thus earning the gals the moniker of “Dirty Pair,” to their endless chagrin.

Tamaki certainly knows pulp sci-fi art, having previously worked on the late 1990s Star Wars manga; there are some spectacular illustrations of futuristic cityscapes, spaceship dogfights, and celestial phenomena. But Tamaki’s character artwork and panel layouts highlight just how much more overt the nudity and sexual content in Dirty Pair has become. I suppose the books do say that Kei and Yuri have ESP abilities which activate only when their clasp hands and press their bodies together, resulting in post-coital like exhaustion (see, it’s a trick they discovered in college), but until now the franchise was never quite as visually salacious as its title suggests. Fair warning: for all the flippancy toward genocides great and small, a lengthy sequence showcasing a murderer’s history in sexual slavery may cross the Rubicon for some readers.