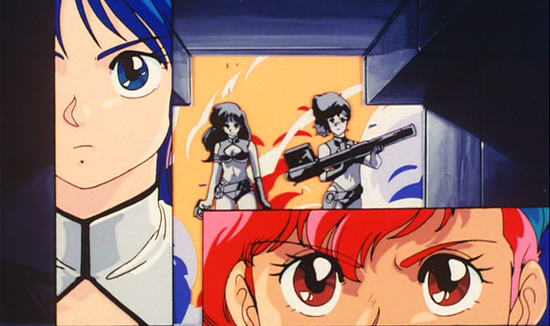 Sometimes it’s fun seeing an old friend get a new look to appeal to a new crowd while retaining what made her special in the first place. Such is the case in the newest American release of the Dirty Pair OVA series.

Some of my contemporaries have written more extensively about these characters here on the website and in the magazine. But for those reading here about them for the first time, the Dirty Pair refers to two ladies named Kei and Yuri, who in the distant future (2138 – 2145 to be more accurate) function as troubleshooters for the World Welfare Works Association, which loosely polices humanity throughout the galaxy. They are officially known as “Trouble Consultant team 234: the Lovely Angels,” but get nicknamed “The Dirty Pair” for their tendency to make situations ten times worse before solving them (even though this is rarely their fault), bringing much grief and paperwork to their supervisor, Chief Gooley. 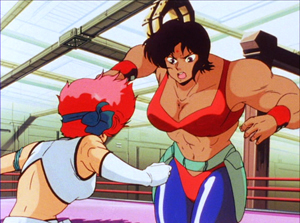 The series was created in 1979 as a set of novels by Haruka Takachiko, starting with the publishing of “Great Adventures of the Dirty Pair,” released in the U.S. by Dark Horse comics. The novels were done in connection to another of his works, Crusher Joe, which is also covered elsewhere on this site. Crusher Joe is similar, though a bit more serious, fare about a group of galactic mercenaries who have their adventures a couple decades after the Dirty Pair.

Takachiko is said to have been inspired while watching women’s tag-team matches in All Japan Pro Wrestling, which, combined with his love of science fiction, likely led him to create the duo alongside character designer Yoshikazu Yasuhiko, and later Tsukasa Dokite at Studio Nue. The ladies are very different, with Kei being a somewhat loud, fiery redhead while Yuri is the more demure brunette who can be a very fierce fighter when provoked. They travel to various worlds with their companion Mughi, an experimental, intelligent cat-like creature who can fly their ship, drop off weapons, fix electronics, or just help with undercover work.

The team tackles some interesting situations in this collection, including a casino that gambles with mass drivers, a planetoid prison riot, a group of kids who commandeer a military base, and a dangerous religious cult. (This episode is one of the distinctively bloodier ones, which might be a reason this is an OVA release instead of a TV segment.)  My own favorite has The Lovely Angels pursuing an escaped terminator-like robot with a seemingly harmless disposition, until midnight, when it’s supposed to unleash its destructive firepower on everything in sight. At the same time, groups of thieves set out to use the Halloween festivities this evening wearing costumes from anime and American sci-fi to pull off capers… before running afoul of said robot and the pursuing Dirty Pair. Another good one involves an ex-WWWA agent who was rejected for the Lovely Angels and wound up as a pro wrestler dealing an illegal steroid called “Hustle.” It has a rare moment when she faces Kei in the ring and Kei shows compassion (and slight fear) toward her enemy. 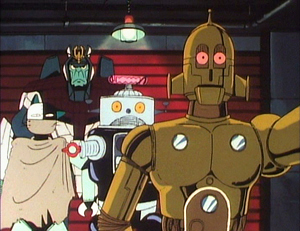 This particular series is the 4th animated project featuring the Dirty Pair to be released in Japan after a 26-episode TV series, the standalone OVA “Affair of Nolandia,” and the theatrical film, which was retitled “Project Eden” for U.S. release. In general, these episodes aren’t much different than the TV series, except for the outfit Yuri wears, matching silver with Kei instead of yellow in the TV show and movie.  The ladies wear space-bikini type outfits like you might see in Jane Fonda’s “Barbarella” or such fare, but the animators don’t flaunt fan-service here as much as modern moe and harem anime might do. Much of the comedy is situational, with the duo looking to solve cases and move on, except that a lot of goofiness ensues. The stories by Yumiko Tsukamoto and Tetsuko Takahashi are a large reason this show is so much fun, and director Masayoshi Tanidabe balances action and humor pretty well. The background music evokes much of the feel of 80s films with pieces sounding similar to themes from Terminator and E.T., among others.

This OVA series was previously released in 2001 to American stores by ADV Films as two DVD collections, “Girls With Guns” and “Damsels In Destruction.” Nozomi Entertainment is now releasing this and several other DP titles, and looks to differentiate themselves instantly, as upon opening the single box, you will find 3 discs inside. The most obvious result of this is more space to put visual information per disc, and Nozomi doesn’t disappoint as the picture is brighter and slightly crisper than before. There are also liner notes added about a few of the episodes this time. The opening sequences are handled differently, as well. Nozomi has subtitles over the existing openings as opposed to ADV’s use on their own graphics intercut with the openings. The subs are also a bit better defined on screen. The one thing that remains intact, however, is the English dub, for which Pamela Lauer and Jessica Calvello portrayed The Lovely Angels competently under director (and Dirty Pair enthusiast) David L. Williams. 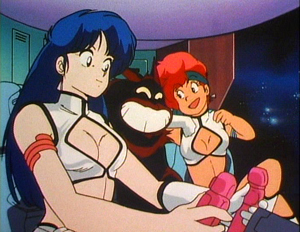 It’s easy to say this release is recommended for folks who’ve never watched The Dirty Pair. It’s good comedy and action, and the sci-fi surroundings are easy enough to get into if you’re willing to give 80s cel-based anime a chance. The bigger question would be for those who’ve bought the ADV releases. Is this worth the “double dip,” as it were? I’d have to say yes, because this is some pretty decent work, particularly in the picture quality. Nozomi Entertainment has acquired the rights to all the Dirty Pair anime and it will be interesting to see what they do with the movie and OVAs remaining. Whether you’re a new or veteran fan, give this set a chance; I think you will enjoy it. 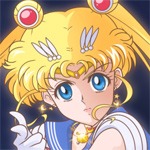 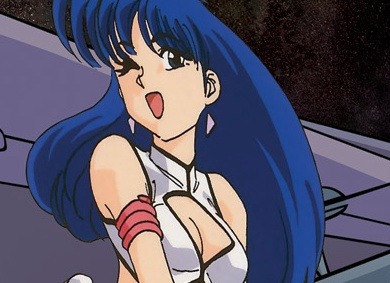 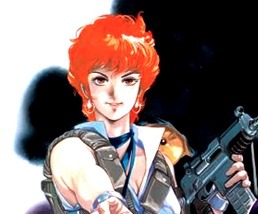