Listen, anime is all well and good, but it’s also good to widen our horizons extremely slightly. If you like anime with flashy battles that fly in the face of common sense, with power-ups, special moves, weird personalities and drama… Do I need to keep drawing parallels, here? If you value sheer entertainment value over nitpicky realism, then perhaps these two worlds have more in common than you thought. 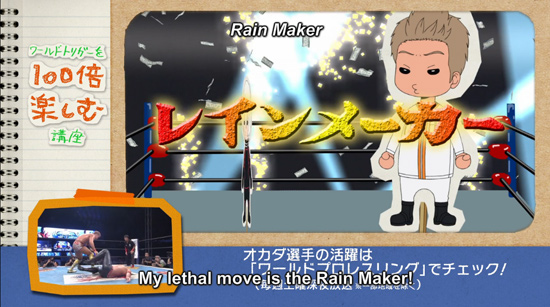 Here is Kazuchika Okada, the “Rainmaker,” in the episode of World Trigger where he guests voices as a minor character modeled after himself. At the end of the episode the real Okada explains to one of the show’s characters who he is and what he does. It’s easy, of course, because they share the common language of the hissatsuwaza. His lethal move, in this screenshot, often commonly called the “special move.”

The concept is understood from wrestling to Shonen Jump to Street Fighter II: to really make things exciting, combatants should have a powerful move or two that’s given great dramatic weight. Shall we watch “The Rainmaker” ourselves?

Did that seem terribly flashy to you? Not really, right? But it is impressive, and it’s given dramatic weight. Everybody involved gives their all into making that hit the highlight of the match. Okada connects beautifully. Tanahashi flips end over end like a fish that got shot. The announcers start screaming. The ritual of the whole thing has its own power. The crowd goes wild. In the storyline, no man has ever gotten up from the Rainmaker lariat. That’s part of the dramatic weight too; the legend of the move itself.

Is that environment very far off from that of a Rasengan or a Kamehameha? Don’t the special moves serve a very similar purpose?

On the opposite end, I want to show you Shinsuke Nakamura’s “Vibration Kick.”

This is totally the opposite; it’s all flash! It doesn’t look like it hurts and the intent is probably more to humiliate than hurt… but it’s sold like it’s excruciating! He’s grinding his foot into your face, and he’s doing it while shaking violently, looking like he’s lost his mind. That’s a special move! You don’t think about “why does that hurt?”; you just go with it, dummy.

Heroes get boring if they aren’t tested. Even kids understand this. Goku, Kenshiro, Eren and the rest of ’em all have to overcome larger-than-life challenges by finding it in themselves to get stronger. When you do this right, it’s a great power-up story and everybody cheers. When you do it badly… Gundam Seed Destiny.

Forgive me for going back to Okada for a bit, but he’s had this storyline as well. After a devastating failed shot at the heavyweight title against NJPW “main character” Hiroshi Tanahashi (the normally aloof and arrogant Okada wept openly upon his loss), Okada has been in a slump.

In the recent storyline, he’s lost repeatedly to resident big guy Bad Luck Fale: he wouldn’t normally lose to Fale, but the loss to Tanahashi destroyed him. And so Okada was beat up over and over again until he rose from the ashes (in a new outfit, of course), defeated Fale, and challenged the reigning champion (AJ Styles) with a sneak attack at the end of the last big show. Will the reborn Rainmaker be able to use his new power to conquer the Phenomenal One?? Find out next time on– you get what I’m saying here.

You know how there’s that guy in the shonen fight manga, who you don’t even know why he’s there? It was either Toriyama or Oda who said that shonen manga was about impossible situations being resolved in the dumbest way possible. (Don’t cite me.) 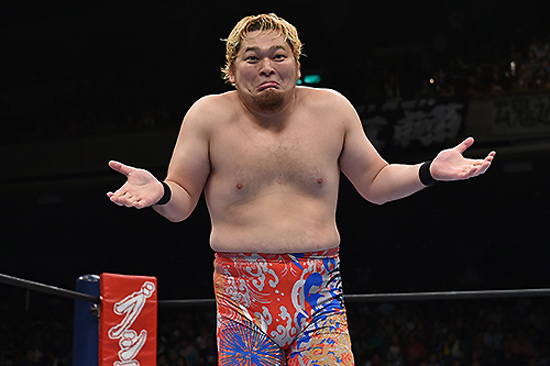 So let’s talk about Toru Yano. Yano is a cartoon villain. He’s a dirty-tricks wrestler. He walks to the ring hawking his DVDs and spitting booze all over the place. He runs away. He always takes the padding off the corner of the ring, and the announcers always say “so soon! He did it so soon!” He recently beat Tanahashi in a two-minute match by pulling his hair. He once won another match by handcuffing Minoru Suzuki (a much badder bad guy) to a fence and leaving him there.

Like the yandere, the murderous pretty boy, Dan Hibiki, or Yu Kobayashi, the wild card weirdo makes things more fun for all of us. 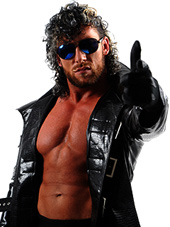 You know this character from anime: the American who’s so taken with Japanese culture that they fly out to live the dream. Or maybe you’re this character. Maybe I’m this character; I’m going to see NJPW in Osaka in July after all. In any case, your fellow otaku are here in the ring too.

Kenny Omega, who is perhaps best known for wrestling a nine-year-old girl, fights alongside the villainous Bullet Club while running a Sephiroth gimmick, “The Cleaner.” His finisher is the “One-Winged Angel”; he gets the other guy up on one side of his shoulder. If that wasn’t enough, theme music that totally is not at all inspired by the classic Final Fantasy 7 theme plays as he enters the ring in a black coat. In early appearances as “The Cleaner”, he was even coloring his hair silver.

In the last big event, Wrestling Dontaku, there was a battle of the American Japanophiles, as Omega challenged Alex Shelley. Shelley responded with the famous Fist of the North Star line “Omae wa mou… shindeiru” (you’re already dead). Running with this, the entire promo for their match was a long Fist of the North Star joke, with the announcer saying “hell is too good for you!” and “you don’t deserve to live beyond today!” of Omega.

During the match, Omega did his best impression of Hugo from Street Fighter, bellowing “BACKBREAKER.” There are otaku in the wrestling ring. Your people are here.

Jushin Liger was a late-80s Go Nagai/Sunrise co-creation, which came and went pretty quickly. However, at the same time as the anime, the wrestler Jushin Liger appeared: he even powered up to Jushin Thunder Liger when the anime character did. Indeed, the wrestler Liger became a living legend, who long outlasted his animated inspiration: he’s still working (a lot) today, despite being 50.

Tiger Mask was the original anime gimmick wrestler, based on the 70s character. Unlike Liger, who’s sticking around to the bitter end, the name of Tiger Mask is passed down. Right now we’re on Tiger Mask IV. As fellow anime characters, Tiger Mask and Liger are of course regularly associated, and recently they had a friendly “let’s see who’s stronger!” feud.

After seeing the WWE Network, NJPW put out their own: NJPW World. For a subscription, just like WWE Network, you get all the pay-per-view shows and access to a deep archive going back to the beginning of the organization; this includes a lot of American stars (Hulk Hogan, Steve Austin, Andre the Giant) doing work in Japan for NJPW.

Unlike some other Japanese companies I could name, the owners of NJPW (Bushiroad, a trading card company) look outward at the rest of the world. Though the site is in Japanese, it’s easy to sign up in English, and they’ll take your American money, no problem.

Years ago I wouldn’t have imagined that I’d be able to sit down and Crunchyroll up my anime without actually hunting down each individual episode, and now New Japan is equally easy to access. Clearly anime and Japanese pro wrestling were meant to be together on my TV. I should have been lounging like this my entire life.