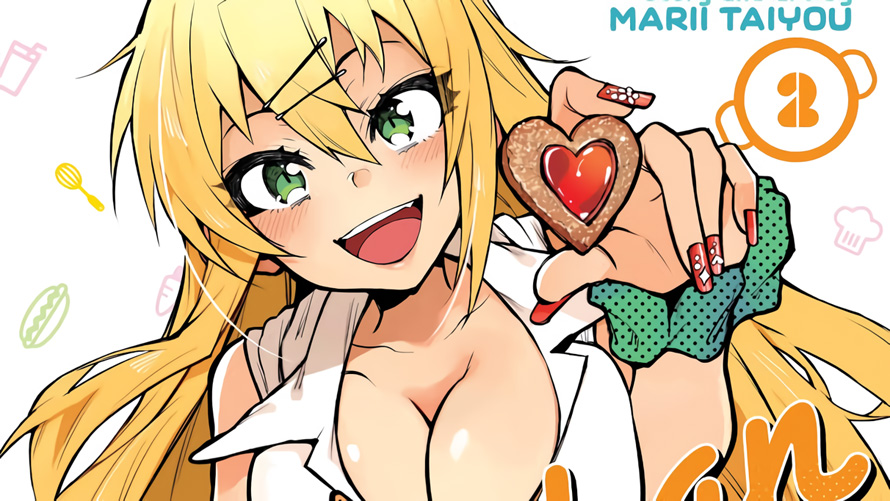 Everything about Gal Gohan (“Meal Gal”) has the feel of an old-school comedy manga, bursting with slapstick gags and panty shots—plus lots of food. Disappointed by his failure to connect with students, young home ec teacher Shinji Yabe starts a cooking club. But the only student to show up is Miku Okazaki, “the school’s number one gal,” who has huge boobs, masses of bleached blonde hair, and no domestic skills. (“You’ve got more girl power than me!” she tells Mr. Yabe.) Miku may not be able to cook, but she’s eager to learn, especially as she develops a crush on her teacher. Mr. Yabe, for his part, is happy to make a difference in a student’s life, even if her brassy come-ons and lack of modesty leave him constantly blushing. And so Mr. Yabe and Miku, and eventually her coterie of loud-mouthed, top-heavy gal pals, explore the joy of cooking together. 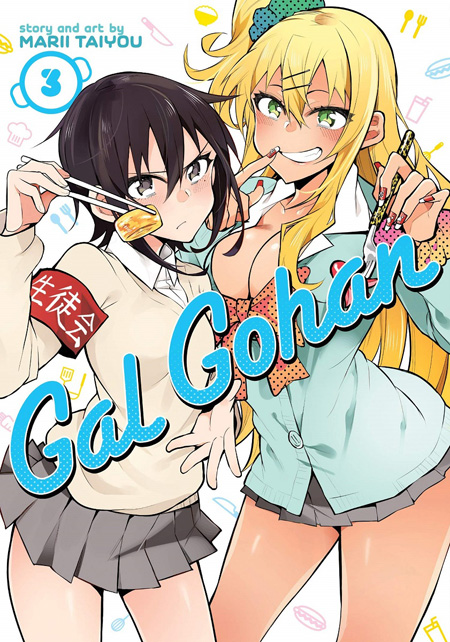 The kogal—bold, sassy, outrageously tanned and coiffed, sexing up her school uniform with short skirts and baggy socks—is by now a venerable stock character in manga as well as in life. Gals had their heyday in the 80s and 90s but seem to be making their way back into recent manga. Miku engages in hoary bad-cooking cliches like putting salt in cookies and washing rice with dish soap, but eventually knuckles down and learns to make Japanese home-cooking standards like roasted fish, hot pot and rice omelet. The cooking scenes are fun and at least moderately educational, although by the end of Volume 1 the manga starts finding excuses to get the characters out of the classroom and into locales where they can eat food without spending three pages explaining how to make it.

The fanservice is over the top—Miku is totes cool with yanking off her top or contorting into panty-flashing positions at the slightest provocation—but with the dynamic of Miku being unembarrassed about her body and Mr. Yabe making an effort not to gawk, it’s almost wholesome. Things only get squicky as the manga begins to take the romantic tension between Miku and Mr. Yabe seriously. It’s fun when Miku brazenly hits on Mr. Yabe and then plays it off as a back-slapping joke, less so when they start going out on semi-serious dates. The difference in maturity between the ditzy teenager and the responsible, grown-ass man is troubling even without the inappropriateness of their teacher-student relationship. As long as the leads remain unentangled, however, Gal Gohan is sunny, fast-paced fun, an unpredictable mashup of throwback romantic comedy, foodie manga, and fanservice extravaganza.

The Misfit of Demon King Academy Is Great, But Have You Met His Parents?
Digimon Adventure: Last Evolution KIZUNA Anime Film Dated for Home Video