The Fantastic Beasts of Monster Musume 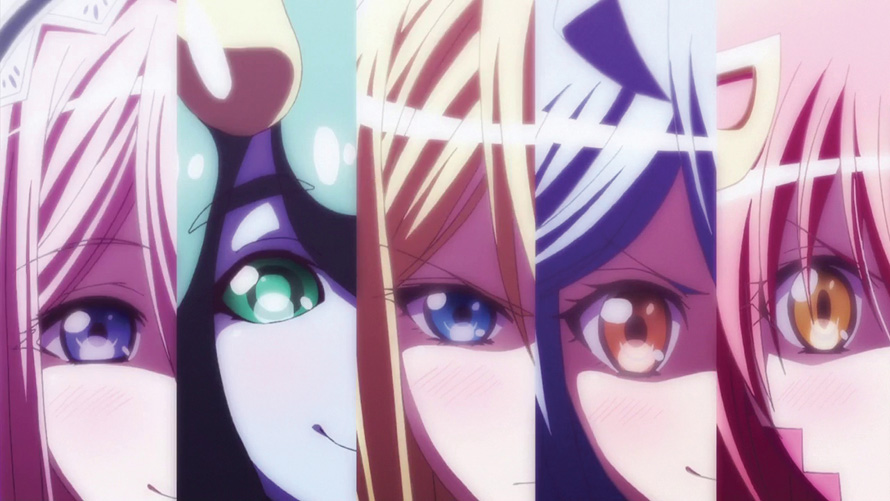 This story originally appeared in the August 2017 issue of Otaku USA Magazine.

Monster Musume: Everyday Life with Monster Girls is a simultaneously adorable and lewd series with plenty of interesting situations revolving around, well… monster girls. Following one Japanese student, Kimihito Kurusu, who’s suddenly tasked with living with a harem of monster girls, it’s all about the “Interspecies Cultural Exchange” program and the Japanese government’s involvement.

It sounds crazy, but the Japanese government has actually always known about mythical creatures like lamia, harpies, and others long assumed to be fictional. Monster Musume is all about living with these beings, called “liminals.” There are some particularly interesting episodes of the series that you won’t want to miss out on, even if you’re only checking in for a short visit with all the girls! Beware, there are spoilers ahead!

Episode 1: Everyday Life with a Lamia

This is the start of it all, the introduction of Kimihito Kurusu and the lamia Miia, as well as the pair’s new living conditions. One day, Kimihito wakes up in bed with the snake-like Miia crushing his body like he’s a small doll in her sleep. His accidental touching is too much for Miia, giving her a great amount of pleasure, all by mistake. Obviously, this weirds out Kimihito, and he jumps out of bed to heat up a warm bath for his newfound lamia bedmate and figure things out. 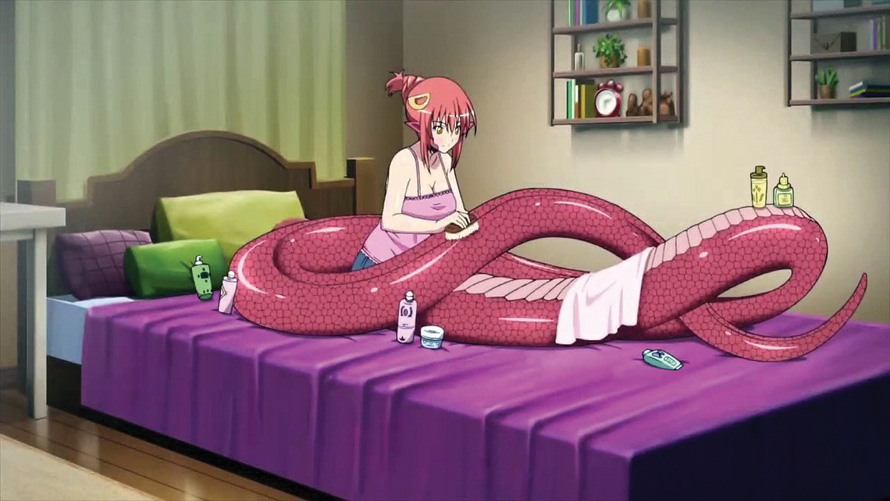 As it turns out, Kimihito is surprised by Ms. Smith showing up at his house by mistake, stating that he actually joined the Interspecies Cultural Exchange Act exchange student program. She leaves the lamia Miia at his door anyway. And since Kimihito doesn’t have the heart to tell Miia to get lost, the two end up living together.

From the get-go Miia tries to seduce Kimihito in some particularly intriguing ways, accidentally dislocating his shoulder once and endangering him more than one time.

The first episode, the debut episode, ends up finding the pair at a love hotel, of all places. There’s also an entire encounter that shows off how cold regular humans can be with the liminal creatures, which sets the tone for the series as a whole as a conscientious show rather than just a raunchy adventure.

Episode 4: Everyday Life with a Slime

This bizarre episode is where the slime
liminal Suu shows up, quite possibly one of
the strangest characters in the show thus far, even though there’s also a centaur and a lamia. It all starts when Miia tries to start cooking on the stove, opens a pot, and finds herself being attacked by a rogue slime. If the real world weren’t full of enough hazards, the guys have to start worrying about threats at home. Only it’s not a real threat: It’s a slime that eventually forms into the shape of a woman, which starts to then wash Kimihito with her body. 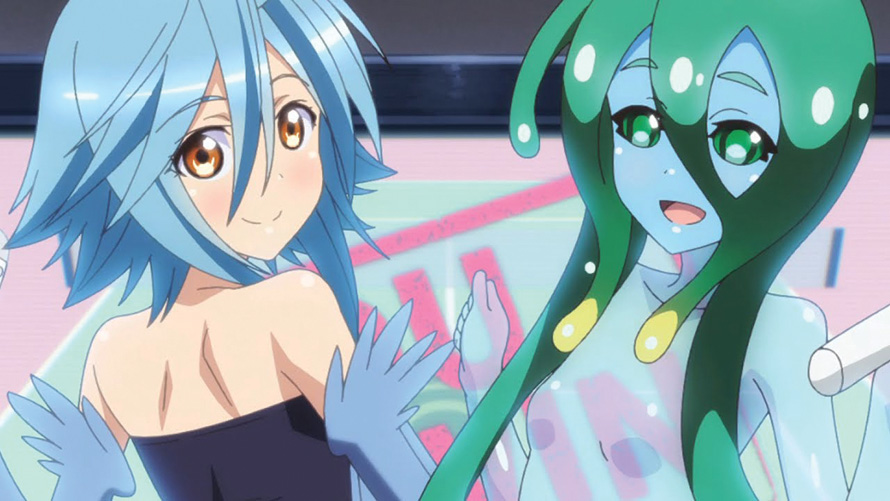 This understandably freaks Kimihito out, and he tries to escape the bathtub but dilutes the slime woman. Luckily, the character Papi decides the slime woman is A-Okay, and names her Suu affectionately because she thinks Suu should definitely have a home there with everyone else. It’s not long after that when Kimihito has to rescue Suu from the racist couple we saw in the first episode, who make an appearance again long enough to remind everyone just what terrible people they actually are.

It ends up that Suu isn’t actually a liminal whose race is classified under the Accord rules, which makes her an “illegal alien.” Ms. Smith doesn’t want anything to do with her, but lets her stay at Kimihito’s house. She’s a curiosity for these reasons, especially since she can also read people’s thoughts and feelings.

All’s well that ends well, however, and Suu ends up becoming a permanent resident of the home, but the entire tone of this episode is certainly one of the weirder ones out there. 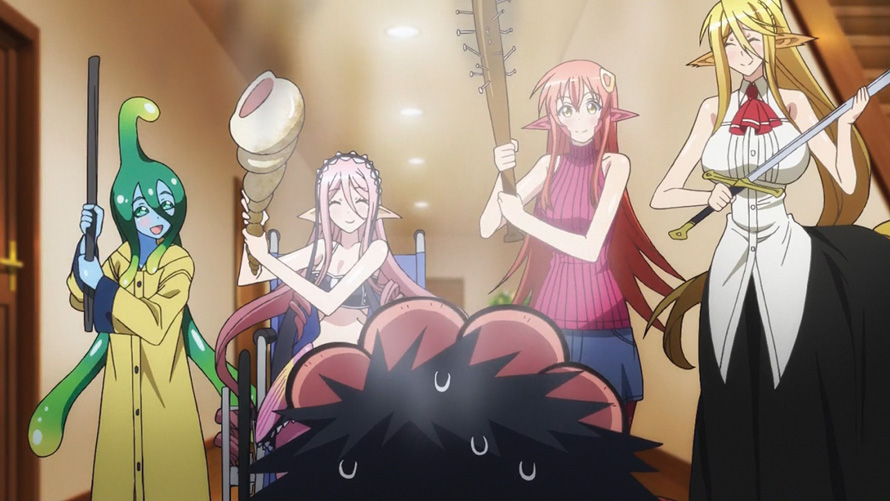 This episode begins with Miia trying to cook again, and as many fans will attest to by now she probably shouldn’t since it always spirals off into something terrible happening. This time she burns her hands on a hot pot. While trying to make her feel better and bandaging up her hands, Kimihito learns that Miia is actually shedding her skin. This ends up involving him trying to help her shed her snakeskin, touching somewhere sensitive, and getting knocked out. It’s always something in this household.

But that’s not all. When Kimihito returns from the store later that day, Papi says that she’s now going to lay an egg. Weirdly enough, this surprises all the rest of the girls in the house—who could the father be? It turns out in the end that Papi is indeed going to lay an egg and actually does so, but Miia cooks it by mistake because Papi thought the best place for it was the refrigerator. What a couple of strange twists this episode takes. But it’s extremely entertaining, too, really driving home how weird and wonderful this harem of monster girls actually is. 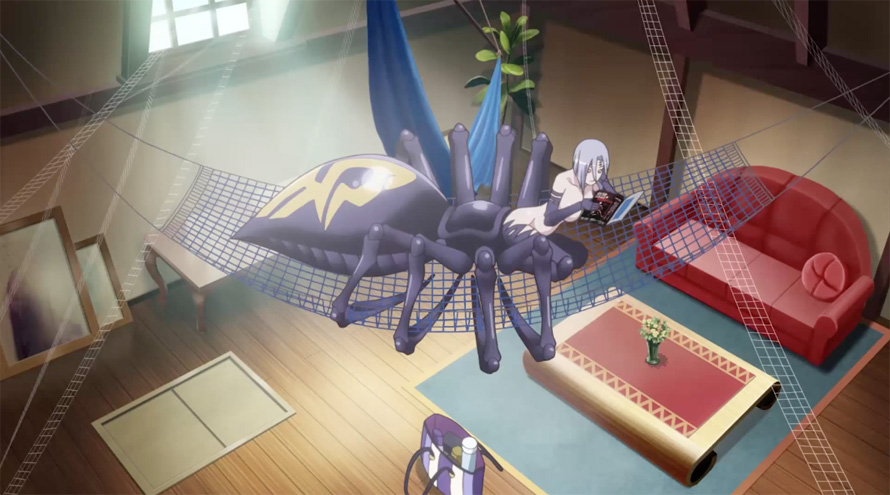 Episode 7: Everyday Life with MON and an Arachne

The orcs eventually find another woman hiding in the store and in the struggle with her rip the blinds out of the store windows, which allows a long-range sniper to shoot the orcs’ guns from their hands. Everything wraps up nicely, but it ends up that one of the female agents shot in the struggle was a zombie named Zombina and one of the “human” hostages was a shapeshifter named Doppel. Handy enough!

Later on, Kimihito has been kidnapped by an Arachne named Rachnera Arachnera, who’s surprised to learn that Kimihito is tolerant of her being a spider. What do you think happens from there? Ms. Smith ends up transferring Rachnera to Kimihito’s house for an even fuller house than before. 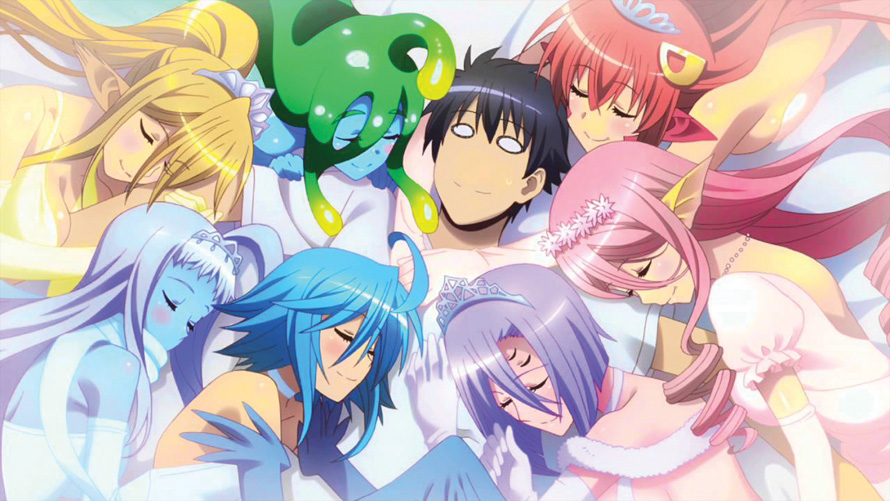 These episodes were all chosen for their weirdness quotient and all of the bizarre happenings that go on within the world of Monster Musume: Everyday Life with Monster Girls. Nearly every episode of the anime series introduces a new character with special quirks and a weird personality that will enthrall viewers. You’ll also wonder where Kimihito keeps everyone since his house isn’t exactly a mansion.

But despite all the craziness, it comes down to being an excellent slice-of-life comedy with elements of the bizarre. If these episodes intrigued you, check out the show in its entirety and then the manga as well! You won’t be disappointed.