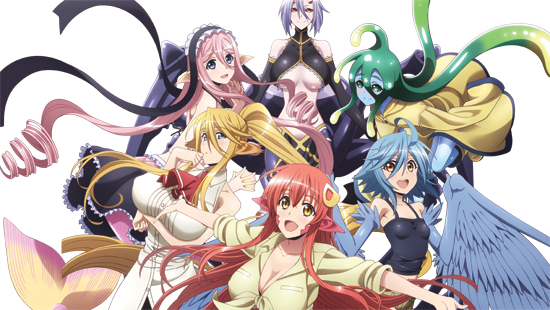 This story originally ran in the December 2015 issue of Otaku USA Magazine.

The “monster girl” scene has been mounting as a bit of a fad as of late, taking women (and men, in some cases) who look like monsters and slotting them in stories where they’re given anthropomorphic forms. They’re usually quite sexy, and certainly someone’s idea of a dream girl, and while many may not be able to wrap their heads around the idea, it’s more popular these days than ever. Monster Musume is a shining example of the genre, following humanity’s contact with “liminals,” or monster/animal hybrids, and while it’s more than a little wacky, this “every day life with monster girls” is an exciting time from start to finish. But only if you dig monster girls. And you probably will.

Kurusu Kirihito is a twentysomething who finds himself face to face with a gorgeous lamia one day. A lamia, in layman’s terms (pun totally intended) is a half-snake, half-woman, and this particular woman, Miia, has been assigned to live with Kirihito. It’s not as though he’s particularly busy or living it up, but it’s a little weird, you know? It’s certainly not normal to be living with a monster woman. And what’s more, she’s been assigned as part of some bizarre government program. It turns out her handler had the wrong house, though—but that doesn’t matter too much, so long as Miia has somewhere to stay so the government can do all the snooping they want about how humans get along with monster girls. 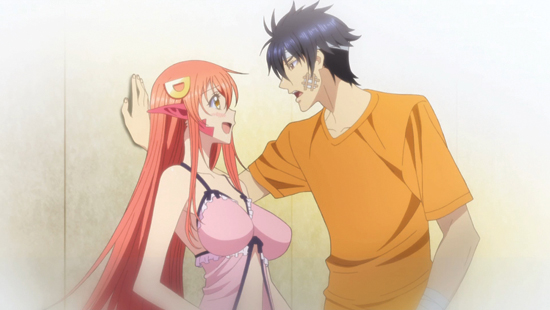 It doesn’t stop there. Kirihito is constantly assaulted by additional monster girls who Ms. Smith, the government agent, thinks should live with him for the experiment. So you’ve got monster women like Papi the harpy and Centorea the centaur, all with clashing personalities and an overwhelming love for Kirihito. It’d be your typical harem anime if there weren’t so many weird bodies writhing around everywhere.

Breaking the Mold with Memorable Characters

Monster Musume seems just like another harem series, but what sets it apart is its excellent humor from creator OKAYADO and the enjoyable personalities of its core cast. They’ve all got their quirks and memorable points about them. Miia the lamia is the first liminal to come along, and she’s got about a 26-foot tail that trails along behind her. It’s dangerous for her to be in cold water and she’s got a big crush on Kirihito. All lamia are female, you know—so this just plays into the narrative. She believes Kirihito should marry her, so this causes a lot of fights with the rest of the girls in the house. She calls Kirihito “darling” and cooks for him when she can. It’s just too bad she ends up poisoning everyone when she tries. 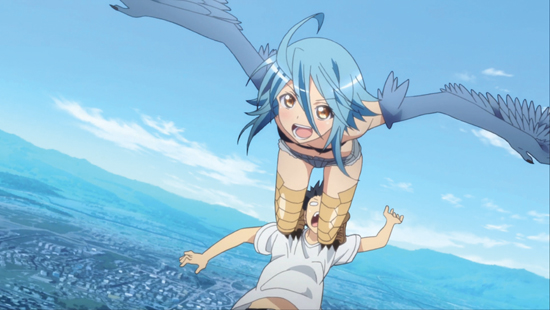 Papi the harpy is childlike in nature and absolutely adorable. She’s a very small little thing and is unfamiliar with human customs and words, but she’s very protective and motherly when it comes to children, even giving the liminal Suu her name. She loves video games and tends to refer to herself in the third person. It’s a little unclear whether or not she’s actually romantically interested in Kirihito, but given her childlike nature it might end up being a little strange if she truly is.

Centorea the centaur (also known as Cerea) is decidedly more “well endowed” than the other members of the house, and she’s honorable and chivalrous, remaining very selective about who rides on her back, and that’s only her “master,” or Kirihito at the moment. Centorea is just as much in love with Kirihito as the rest of the girls, but she thinks of herself as more of his “knight” than his lover, attempting to remain as noble as possible at all times. 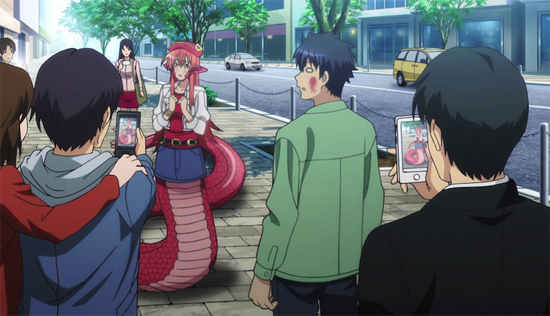 Meroune Lorelei is one of the warmest personalities you’ll find in Monster Musume. She’s a mermaid girl who gets around in a wheelchair since she has no legs with which to get around. She’s got gills on her body and webbed hands and chooses to wear a maid costume when she goes out. That all might sound palatable, but she’s also extremely slimy and has a strange, masochistic tendency to enjoy pain and the allure of a “tragic love,” like that of the Hans Christian Andersen story of The Little Mermaid. Hey, at least it fits! 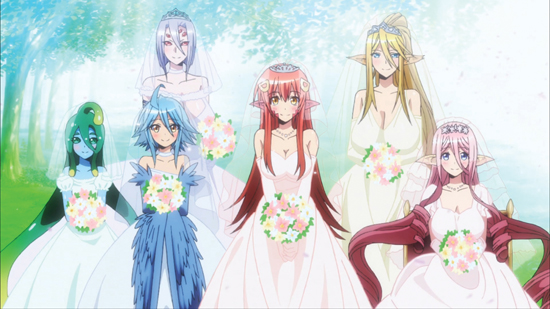 Why monsters? Why women? Why not? For as long as there’s been anime (and humanity, for that matter) there have been creatures in both fiction and mythology that resemble the girls of Monster Musume, and the strangeness combined with the familiar makes for an intriguing mix of content. Sure, it’s weird that some girls are lamia and others are mermaids, but it also calls for some cool new situations that other harem series haven’t truly done before, at least decently. So there’s something new and wild going on that you haven’t seen done to death, like making cookies for your crush or the typical fighting between the women to see who should bag the protagonist. While there’s a lot of that going on, sure, it’s done in a comedic (and sometimes very raunchy) manner, so there’s reason to keep coming back and watching. The raunchiness may turn some viewers off, but it does feel as though it has a specific place in the narrative, and it works hand in hand with the rest of the aspects of the series to create an engaging whole.

Monster Musume may seem like a motley collection of weird monster women just vying for their one true (human) love’s affection, and well … it is. But that shouldn’t stop you from giving it a try. Pass up Love Hina for the umpteenth time and let a little lamia into your heart. Come on, babe. Take a walk on the wild side.

Monster Musume is available on Bluray and DVD from Sentai Filmworks.