One big advantage of living in Tokyo for the geek-inclined is the city’s plethora of used bookstores, offering on the cheap what U.S.-based fans pay dearly for in convention dealers’ rooms across the country. Everything’s in Japanese, natch, but if you can read a bit (or are satisfied with just lookin’ at the pretty pictures), 500 yen (about $6.50) can buy you some pretty neat stuff. Our mission: to infiltrate (read: walk into) bookshops across the city and see what we can get with just one coin.

Perhaps the most widespread and well-known chain of used bookstores in Japan is Book Off, which even has a few stores in the States. Today’s challenge brings us to a Book Off in Asagaya, a cozy ‘burb nine minutes west of Shinjuku. It’s far from the biggest Book Off around, but even here we should be able to find some treasures.

First, a trip to the CD section. Though ostensibly a bookstore, Book Off also carries used music, movies and video games (they even have a couple spin-off shops – Mode Off, which sells used clothes, and the hilariously-named Hard Off, which carries various electronic hardware). 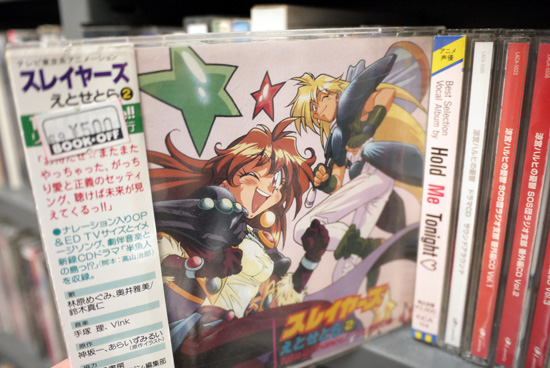 90s anime fans will be quick to remember Slayers, the comedy-fantasy series chronicling the adventures of magician Lina Inverse. Slayers had quintessential 90s J-pop opening and ending themes courtesy voice actress/singer Megumi Hayashibara, who played Lina. In fact, for a good ten year stretch, Ms. Hayashibara was in about every anime ever. Though she’s slowed down her output somewhat in recent years, she was recently in The Wolf Children Ame and Yuki, which we reviewed in this very newsletter.

Final analysis: Slayers had some nice Megumi Hayashibara tunes, all right, but 500 is a bit much considering the rest of the CD is unmemorable background music. No sale. 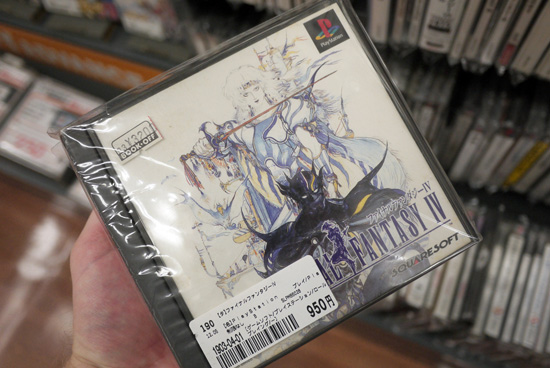 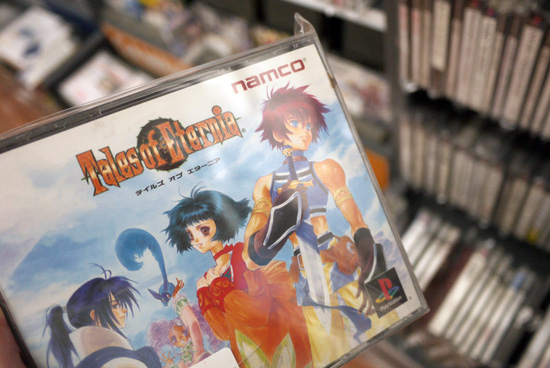 Wandering over to the video game section, it appears the oldest games on sale (ergo the most deeply discounted) are for Playstation 1.

Here’s a tale of two franchises: Tales of Eternia, retitled Tales of Destiny II in North America, was a generally well-regarded RPG when it was released in 2000. It’s now 350 yen. Meanwhile, the Playstation version of Final Fantasy IV, a 1997 port of a 1991 Super Nintendo game, still hovers at almost twice our one-coin limit. Some games just have legs.

Finally we take a look at Book Off’s stock and trade: books. This is the coolest part of used bookstores in Japan, in our opinion: shelves upon shelves of manga for about 100 yen a piece. If you can read Japanese, you’ll never run out of dirt cheap comic books – and if you can’t, your heart will ache thinking about how this exact same stuff carries ten times the cost at your local Barnes and Noble.

We’ve got an entire 500 yen, though, so let’s take a look at something everyone can enjoy regardless of language: artbooks. 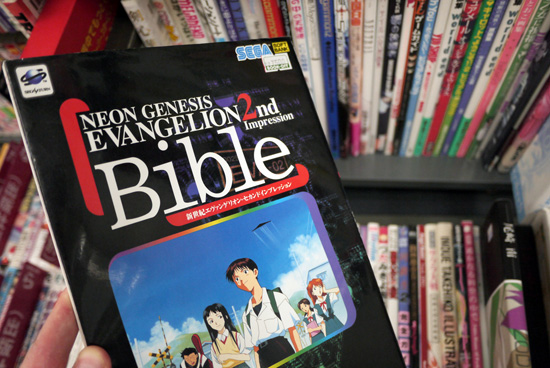 First up, a vintage Evangelion “Bible”: what you’d turn to in those dark, pre-internet days to find out what exactly is going on with those Angels and depressed kids. This book, specifically, covers Second Impression, a 1997 Sega Saturn game whose mediocre play and stock footage didn’t – sorry about this – leave much of an impression.

Analysis: Evangelion is one of this author’s favorite series, and it’s always fun to look at this stuff from the 90s, but this book is comprised largely of grainy screenshots in an unpleasant layout. Boo! 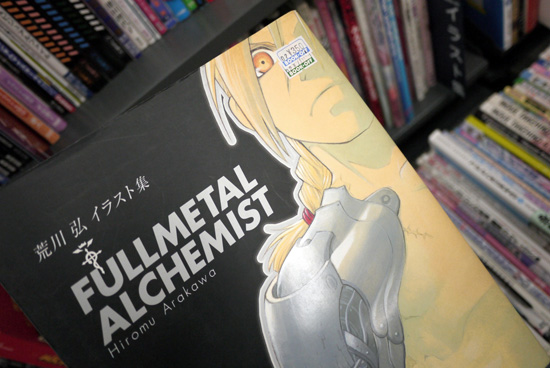 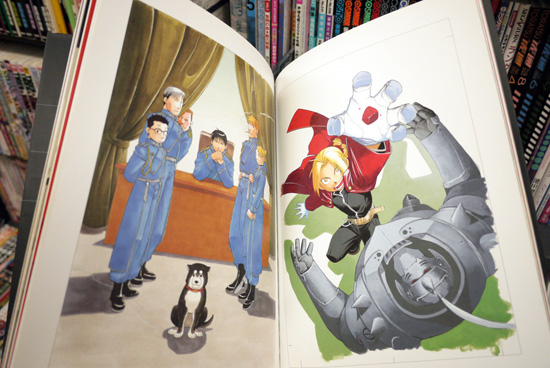 Now this is more exciting: a full-color, slick-looking Fullmetal Alchemist artbook by the original manga artist herself, Hiromu Arakawa. This a perfect example of that price inequality we were talking about earlier: this puppy would easily go for $20 in any convention dealers’ room in the States; here, it costs about four bucks.

Final analysis: Pages of slick-lookin’ FMA art for the price of a hamburger? Sale!

That’s it for our bookstore explorations this time. See you soon!