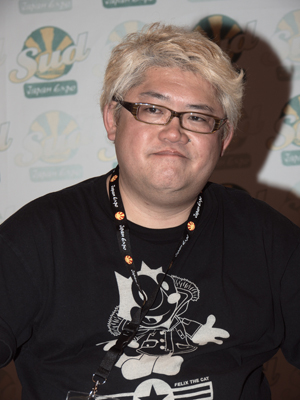 Osamu Kobayashi grew up in the 1970s, something of a golden era for future animators. Weaned on the work of Yoshinori Kanada, Isao Takahata, and Hayao Miyazaki, Kobayashi knew he wanted to be an animator from an early age.

After working on a variety of projects throughout the 80s and 90s (his earliest credit is mechanical design on 1988’s Dragon’s Heaven), Kobayashi had a chance to let his creative sensibilities shine in a series of avant garde works for Studio 4C in 2002.

It was his one-man ending animation sequence for 2003’s Gad Guard, however, that Kobayashi says got him noticed and led to him acting as director for the 2004 Madhouse production Beck: Mongolian Chop Squad. Since then, Kobayashi has directed everything from entire series (2005’s Paradise Kiss) to one-off episodes for everything from Gurren Lagann to Kemonozume. He is currently working on a project with a currently unnamed American musical group.

In this interview, we talk with Kobayashi about his influences, aspirations, and the sometimes-controversial episodes he’s sneaked into popular series over the years.

OUSA: What were your biggest influences growing up, who made you say “I want to become an animator!”?

Kobayashi: Yoshinori Kanada, who worked on a lot of classic shows, was definitely a major inspiration. Also, Osamu Dezaki, who directed Ashita no Joe. Hayao Miyazaki’s early TV show Future Boy Conan was a huge influence on me, too.

I also watch a lot of movies, live-action movies. Akira Kurosawa, John Ford, Howard Hawks… tons. So I’ve been influenced by a lot of stuff, not just animation. Speaking specifically of animation, though, yeah, Ashita no Joe, Future Boy Conan, Heidi, 3,000 Leagues in Search of Mother. If I had to pick one film that I was inspired by above all others, though, I’d probably go with Mr. Smith Goes to Washington. It’s an old movie, yeah, but I cried in the theater when I saw it. And if you ask me, Hayao Miyazaki was inspired by it, too. 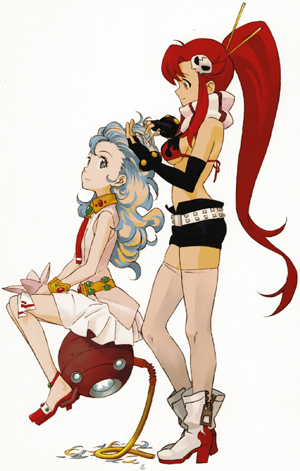 OUSA: You’ve become known as of late for coming into a series around the 4th or 5th episode and taking things in a different direction from what’s come before. Gurren Lagann episode 4, for example, has character designs and animation that are a drastic departure from the previous episodes. Can you talk about the story behind that at all?

Kobayashi: Yeah, that one sure is way different, huh? Gurren Lagann episode 4… The reason that one happened is because the director – Hiroyuki Imaishi – came up with the plot for the episode. Imaishi is a crazy guy, and he was really gung-ho about doing it his way.

Also, the character designer, Atsushi Nishigori, did the character designs for a show I directed called Beck. He really likes my drawings, and actually modeled some of his ideas off mine when he was working on Beck, and when episode 4 of Gurren Lagann rolled around he just left my drawings the way they were.

I actually asked him about that when we were working on it. “Hey, are you going to change my drawings? They don’t look like your designs at all.” And he just said “It’s okay. I really want to see your drawings for this one.” That’s the truth! Some people talk bad about me, saying I’m selfish, doing it my own way, but like… that’s not really me in that episode. The craziest scenes were all Imaishi!

Of course, Gurren Lagann’s setting, themes, characters… the show’s got a really distinct flavor, and that’s mostly the creation of the show’s primary scriptwriter, Kazuki Nakashima. Imaishi’s take on things was obviously quite a bit different from Nakashima’s, so. That’s why that turned out the way it did.

OUSA: On a similar note, the second part of episode 5 of Panty & Stocking was also a radical departure from what had come before. You’re listed as direction and storyboard for that one, alongside animation director Takashi Mukoda. Same deal as Gurren Lagann, or…?

Kobayashi: That was another show with Imaishi as director, and every episode he’d done before that one ended up just being absolutely bonkers, crazy, as usual. So Imaishi tells us for episode 5, “hey, this episode’s totally different, so you can do whatever you want.”

Up to that point, Panty and Stocking, these two girls, were the main characters, and the story was told from their perspective. But episode 5 was an episode told from the perspective of a human who had been turned into a ghost, so we were given free reign to do whatever we wanted. 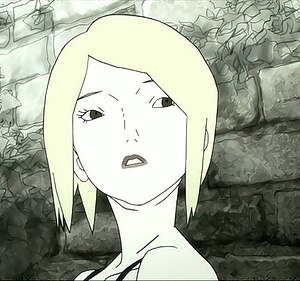 OUSA: Ben Ettinger of Anipages actually put out the theory that Mukoda was inspired by an OVA series from the 90s called The Hakkenden, which had a sudden and drastic change in visual style around the 10th episode. Do you know anything about that?

Kobayashi: Oh, yeah. That episode of Hakkenden you’re talking about was directed by Shinya Ohira, and Mukoda’s a huge fan. That’s probably why episode 5 of Panty & Stocking ended up looking the way it did. I did the backgrounds for that episode, and some of the character designs. My designs were actually closer to the typical Panty & Stocking style, but Mukoda changed some of them, and I didn’t want to mess with what he was doing. He wanted to do his thing, and I just let him do it. (grin)

I’m really good friends with Masaki Yuasa, who directed Mind Game and Kemonozume. He’s got a really distinct style, and I don’t really want to step on his toes by drawing like him, y’know? So that episode was kind of a struggle. People kept saying “man, that looks like Kemonozume!” And I did an episode of that show, too, so…

OUSA: Let’s talk about that, actually. What was it like putting together an episode of Kemonozume? Did Yuasa give a lot of direction on how things should look, or was it anything goes?

Kobayashi: There’s a detective character in that show, and a monkey, and I wanted to do the episodes where they had the most screen time. But I got charged with directing a… how do I put this? It was kind of a kinky, pervy episode? The schedule was really tight, and the production didn’t go smoothly, either. To tell you the truth… I ended up doing all the drawings on that episode, and I didn’t use any of the main staff that Yuasa had, either.

It was tough, but he really appreciated all the hard work I put in. When I was working on The Mystic Archives of Dantalian a few years later, he helped me out a lot in return, drawing all of the scenes with insects. And… honestly, the episode I worked on for that show also looked completely different from every other episode in the series. It was an episode that 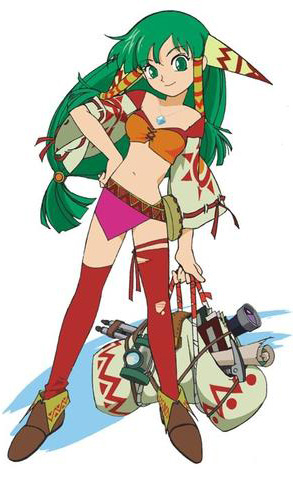 took place inside a book, so they told me “hey, it’s okay if it doesn’t look like every other episode. Go nuts.” All according to plan. (laughs)

OUSA: Going back a little further, here. You handled the world setting for the 1997 video game Grandia, which has something of a cult following at this point. What was that like?

Kobayashi: Yeah, actually, I was really picky about the music in that game. It was a role-playing game, which tend to have these kind of big, orchestral scores, but I didn’t think that was the right fit for the game. I pushed the composer, Noriyuki Iwadare, to have a lot of world music. Bali, kecak, bagpipes, etc…

Kobayashi: Well, the game’s director really liked my idea, so he pushed it through. (laughs)

OUSA: You also did a short for Ani-Kuri 15, a collection of 15 one-minute shorts from various Japanese animators. Yours was, of course, about a record store.

Kobayashi: Oh, yeah. They told me I could do anything, and… actually, the story I put together was based on a real-life record store that actually exists. I go there all the time, and the old dude who I put in that short, Watanabe, is a real guy who actually works there! He’s one of my favorite characters I’ve ever put in an anime, and he’s one of my favorite guys, period, in real life.

OUSA: Where do you see yourself going from here?

Kobayashi: Actually, right before I came here, I handled the promotional video for a Japanese band. Live footage, not animation. It turned out really well, so I’d like to try more work in live-action.

OUSA: Oh, wow. Okay, so you directed Beck: Mongolian Chop Squad, and some music videos before that… Just out of curiosity, what did you think about Kids on the Slope?

Kobayashi: Personally, I’m more of a rock ‘n roll kinda guy, and that was a jazz show, so like… I thought it was okay. I actually really liked the opening, which was done by Kazuto Nakazawa. He did character design work on Samurai Champloo, and a lot of work on the animation segment in Kill Bill: Vol. 1. Honestly, I think he got most of his inspiration from me, but… I’m kinda jealous over how good he is! 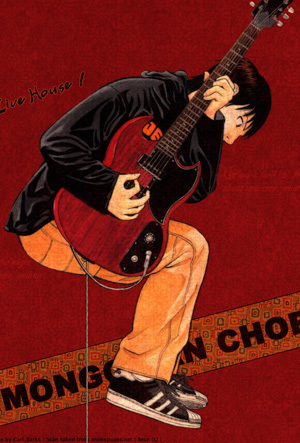 OUSA: Can you talk about what you’re working on right now?

Kobayashi: I’m actually working on something, a collaboration with some very famous American musicians right now. I can’t tell you the title or any details at the moment, but yeah, definitely look forward to that.

OUSA: If you had the opportunity to do whatever you wanted, a “dream project,” let’s say, what would it be about?

Kobayashi: Well, as you might expect, I love animation about music, bands, that sort of thing. If I could do anything I wanted, it’d probably be a near-future setting, maybe similar to Macross — okay, not Macross, but like… something related to music. I like punk music, so maybe something like that? I also really like The Who. Working with them on a show would be pretty awesome.