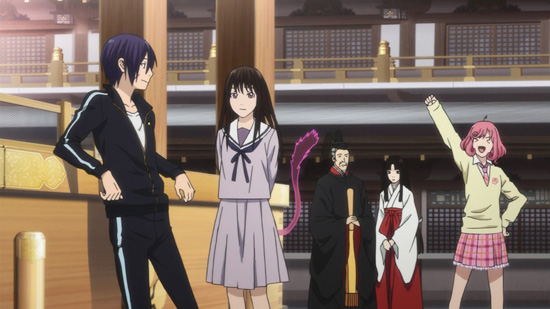 I reviewed the first season of Noragami (literally “stray
god”) last issue and praised the series for its likable cast, fresh designs, and quirky comedy. Now Noragami is back with a new series, subtitled Aragoto (referring, I believe, to a style of kabuki). The main creative staff—including Studio Bones and director Kotaro Tamura—are back as well, and Aragoto picks up right where it left off…

Episode 1 reintroduces self-proclaimed “Delivery God Yato,” a local god once feared for granting murderous Earthly wishes, now reduced to performing odd jobs in modern Tokyo and slaying malignant ghosts for a measly five yen per gig. His sidekick is a Regalia (a human spirit-turned-holy weapon) named Yukine, who last season worked out his teenage angst in a somewhat tedious introductory arc. Finally there’s Hiyori, an average Japanese high schooler—if not for her soul’s embarrassing tendency to slip out of her body and into the spirit world of Yato and Yukine. 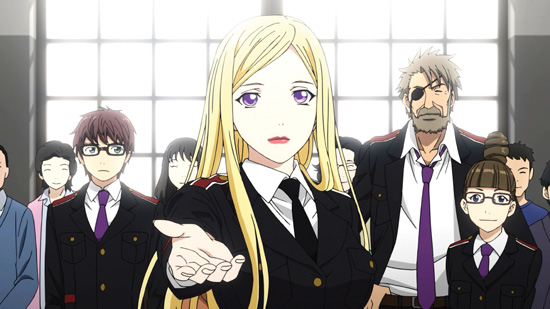 Whereas Season 1 floated by on the strength of its characterization, Aragoto provides a much sturdier narrative foundation. There’s still a lot of focus on inner feelings—gods are affected and sometimes corrupted by the emotional turmoil of their Regalia—but by introducing a new group of characters, Aragoto provides a stage to make that intangible conflict more immediate.

Enter Bishamon, a side character from Season 1. She’s a famous god of war who houses hundreds of Regalia in a massive palace, and her Regalia arsenal includes a lion, a whip, a giant sword, two pistols, and … a weirdly revealing costume that looks more like a cosplay fetish outfit than armor. At the helm is the bespectacled Kazuma, her trusted advisor who takes the form of an earring in combat. Unfortunately for Yato and Yukine, Bishamon has a centuries-long grudge against the lowly god for a grave crime he once committed. This rivalry, along with the inner conflict within Bishamon’s estate, is what drives Aragoto’s first six-episode arc (which is all that’s aired as of this writing). 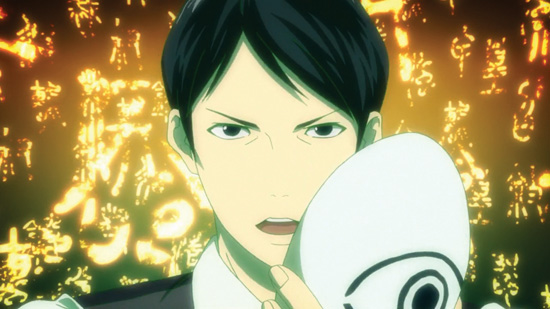 It should come as no surprise that Yato and Bishamon end up duking it out by the end of the arc, but how Aragoto gets there is what’s really fascinating. It turns out that Bishamon’s habit of turning lost spirits into Regalia has roots in Yato’s past, and soon the strain of caring for so many spirits begins to take its toll. The central conflict, a conspiracy to destroy Bishamon from within her household, is surprisingly complex and diabolical, pitting unwitting gods and Regalia against each other in a tragic display of pride and miscommunication.

Noragami’s penchant for likable characters gets used to even greater effect in Aragoto, which brilliantly blurs the lines between protagonist and antagonist. Bishamon spends much of the series as a sworn enemy of Yato and Yukine, but she and her Regalia are a hopelessly sympathetic surrogate family to each other. Even the true villain turns out to be acting out his own form of love, twisted as it may be. The very best tragedies often excel at this sense that evil doesn’t always stem from evil people, but sometimes from a series of small mistakes by good people. 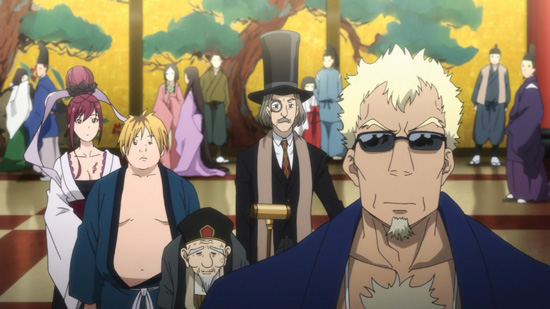 The Bishamon arc is easily the highlight of Noragami thus far, but unfortunately it leaves the main cast largely on the sidelines. Yukine’s friendship with one of Bishamon’s Regalia provides some drama early on, but Hiyori’s only contribution is to be captured and used as bait for Yato, a predictable and regressive plot device that the first season leaned on as well. What’s weird is that Noragami frequently drops hints that Hiyori’s spirit form might be able to hold its own in a fight; she’s always imitating the moves of her favorite MMA fighter, after all. It’s clear from Bishamon that ladies aren’t to be taken lightly in this series, so it’s a crime that Hiyori hasn’t gotten in the ring yet.

Considering the significant staff crossover and short timeframe between the two versions, it’s no surprise that Aragoto feels a lot like the first Noragami series in terms of visuals and pacing. Kotaro Tamura’s direction strikes a cautious balance between comedy and drama in the first couple of episodes, mirroring the playful banter and occasional angst that marked the original series. The fights in the Bishamon arc proper are rarely all that ambitious in terms of frame rate or animation technique, but still feel satisfying thanks to brisk pacing and deliberate use of combat as punctuation for the main story beats, rather than as filler action. A lack of focus on Phantoms (malignant spirits featured heavily in Season 1) means a disappointing dearth of Masahiro Sato’s psychedelic monster designs, but luckily Toshihiro Kawamoto (Cowboy Bebop) is still on board as character designer and chief animation director to maintain his crisp line work on the characters’ faces. 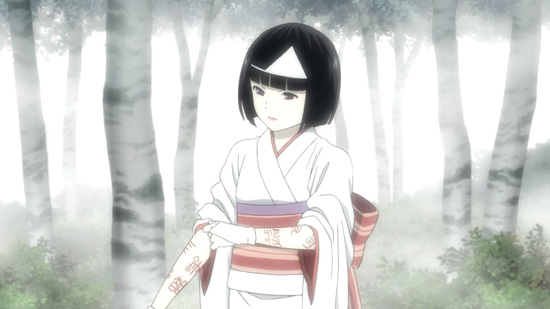 It’s hard to pass judgment on Aragoto at this point, with one arc wrapped up and another one on the way, but as a whole Noragami has proven itself a versatile, enjoyable fantasy series. It benefits from the driving narrative of its shonen manga origins (see sidebar), but a focus on the inner feelings of its characters and a lack of predictable power leveling grants it an emotional depth that some action-heavy series lack. It’s not particularly ambitious and many of its ideas have been covered elsewhere, but likable characters and one standout arc (Bishamon) make Noragami a series that is definitely worth a shot.

[Review] Those Who Hunt Elves
[Review] Honey So Sweet