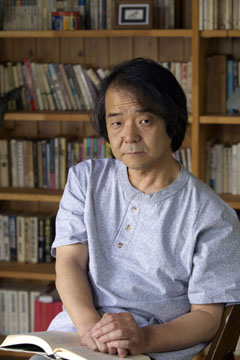 It’s been a rather Mamoru Oshii-influenced week, with the premiere of 009 Re:Cyborg, directed by Oshii protege Kenji Kamiyama, and the successful backing of Kick-Heart, the short on which Oshii is consulting.

The veteran director of classics like Ghost in the Shell and Patlabor, as well as the creator of the sprawling Kerberos saga featured most prominently in Jin-Roh: The Wolf Brigade, is in the news himself this week with the announcement of his latest film, a live-action sci-fi thriller called The Last Druid: Garm Wars.

Oshii is no stranger to live-action, having directed many films over the years, most notably the Polish-language Avalon and the recent Assault Girls. Garm Wars, funded by Canadian company Nakamura Group Advantage, will be the director’s first English-language film.

The basset hound-loving director, whose most recent animated work was 2008’s Sky Crawlers, originally developed the project in the 90s shortly after the release of Ghost in the Shell, but the digital technology available at the time was deemed insufficient. The original project was to have been produced by James Cameron.