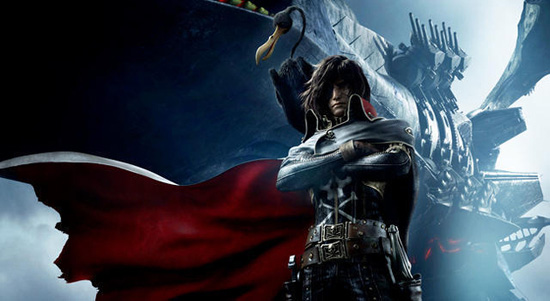 Last week saw the release of Captain Harlock, the new film based on the classic manga and anime series by Leiji Matsumoto. The new film, the latest from CG wiz Shinji Aramaki (Appleseed), is the director’s highest budget film yet, allowing Aramaki to expand and improve on the computer animation techniques he’s been honing for years.

If you’re saying to yourself, “that’s something I’d like to see!” you’re not alone. In fact, you’re in the company of legendary director James Cameron, currently at work on a sequel or two to Avatar (and a long-awaited live action version of Battle Angel Alita, supposedly).

But while you’ll have to wait patiently for the film to be released over here, James Cameron is no ordinary mortal (I mean, he’s been deeper under the sea than any other human alive, for goshsakes!). When James Cameron says “I want to see Harlock,” the director of Harlock gets on a plane from Japan, flies to Cameron’s private, 3D studio, and the two of them watch the film together.

That’s what happened this week, after the film opened in Japan. Aramaki and Cameron had never met before, but they were aware of each others’ work, Cameron being a big fan of Japanese animation and Aramaki being one of the roughly 5 billion people who saw Avatar.

Seriously though, it makes sense: these guys are both pioneers in their respective fields.

So what did Cameron think of Harlock? The Terminator 2: Judgment Day director is reported to have called the film “majestic” and “visually poetic.”

Okay, the creator of the two highest grossing films in history liked it. But what did we think? Keep an eye on your inbox to find out!