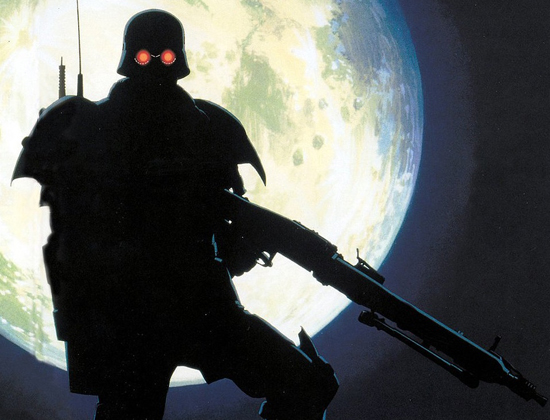 This story was originally published in the April 2008 issue of Otaku USA Magazine.

Jin-Roh: The Wolf Brigade is the finest Mamoru Oshii film not actually directed by Mamoru Oshii. Although Oshii wrote the screenplay and established the universe, it’s the first (and only) film directed by Hiroyuki Okiura. In a world where Germany won World War II—a detail only mentioned once at the beginning—Constable Kazuki Fuse is a member of Japan’s elite special unit known as … the Special Unit. Their mission: to wear really badass armor and terminate hippies with extreme prejudice using MG42s. The fact that the Special Unit looks so incredibly awesome is problematic for some, so when 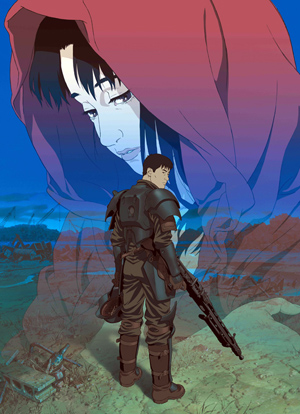 Fuse hesitates to maintain Special Unit tradition [firing 200 rounds into a young girl at point-blank range] and is sent to Remedial Hippy Killing School, a “Trace Buster” of a plan gets set in motion to eliminate the Special Unit entirely. But what of the Wolf Brigade, a supposedly nonexistent organization within the Special Unit specializing in “Trace Buster”—BUSTER plans? Are they even real? What was the name of this movie, again?

Jin-Roh successfully juggles romance, political intrigue, literary symbolism, historical fiction, and multiple machine-gunnings of cops. But despite being remembered primarily for the Yutaka Izubuchi-designed “Protect-Gear” armor, it’s more of a romantic tragedy than an action movie. The story frequently references “Little Red Riding Hood,” though it’s more like the Charles Perrault version than the Brothers Grimm one.

It also resembles actual historical events: following World War II, there really was substantial civil unrest in Japan, which many of anime’s top creators contributed to. It’s so similar that one might question the need to establish this alternate universe at all, aside from providing an excuse to draw German things in Japan and Darth Vader-like armor with glowing red eyes. Dave Merrill, Fandom Hero, believes it merely obscures the fact that this is all a criticism of the Japanese government and the American occupation of Japan following WWII, sort of like filmmakers in America who make war movies critical of whatever current war going on is, but set them during a previous war to deflect the issue. 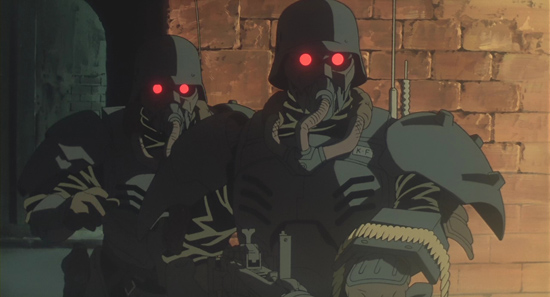 I bought the three-disc DVD set of Jin-Roh from Viz Media and Bandai Entertainment, but it has now been released on Blu-Ray thanks to Bandai Visual. Production I.G.’s visuals and design work are always top-rate, and as Jin-Roh is effectively the last major anime production to be made predominantly with hand-drawn cel animation instead of digital methods, this release is a definite buy if you’ve got the equipment. It’s not perfect, though. I watch anime in Japanese with English subtitles, but Bandai Visual USA’s high-def releases only let you select English or (written in kanji) Japanese. If you pick English, it plays the dub with no subtitles. If you pick the squiggly moon language, it plays Japanese with no subtitles … AND the menus are in kanji. To actually get anywhere, you have to choose English to make the menus something you can read, and then change the audio and the subtitle options as the movie plays. I HATE THIS.

Other than the theatrical trailer and three near-identical TV spots, there are no extras on the disc itself. The old three-disc release included an entire DVD of extras containing the trailers plus really awesome concept art as well as interviews with the creative staff about the production, the CD soundtrack, and an essay by Carl Horn. The Blu-Ray release has none of this, but the booklet provided includes some fascinating interviews and articles pertaining to the film. I figured the trump card of this release would be the complete storyboard to the film that’s included. I was really looking forward to spending hours reading through the Jin-Roh storyboards (as I’d done with the Patlabor deluxe editions), but the storyboard included with Jin-Roh is entirely in Japanese, which I cannot read. Its value as an extra is thus reduced to something I’d just skim through once. 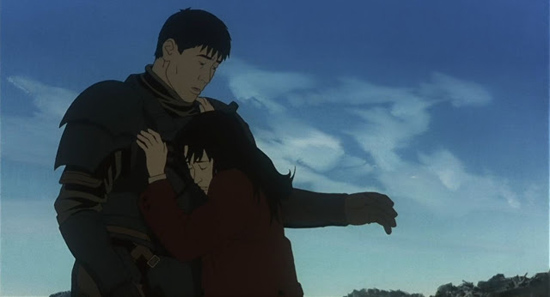 Jin-Roh: The Wolf Brigade is a solid film on all counts, and it’s a credit to the animation medium that it looks so good on the budget by which it was made. Oshii’s live-action Kerberos Saga films don’t look nearly as good as this. I just wish that Bandai Visual would offer regular editions of their titles, since in this case I don’t think the extras included are worth it. If Hiroyuki Okiura ever directs another anime, here’s hoping it’ll be as good as this one or better.