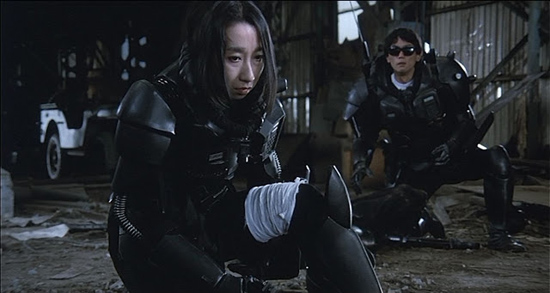 In celebration (or lament) of the release of Mamoru Oshii’s Garm Wars: The Last Druid, we decided to revisit his “Kerberos Saga” by pulling two of Daryl Surat’s stories on the subject out of the vault from way back in 2008.

For all the headway that Japanese animation has made as far as mainstream awareness of the term is concerned, the general perception of animation remains that it’s not viable as a “serious” medium. Sure, every so often you see an article somewhere about how “comics/cartoons are all grown up and not for kids anymore!”—most of which fail to see the point—but despite the vast numbers of grown-ups who frequently watch animation, the medium isn’t really viewed as something one would take seriously. Every single animated program with a significant adult viewership is a comedy: The Simpsons, Family Guy, Futurama, and whatever’s left of Adult Swim’s original programming [that’s still animated] are but a few examples.

To the general public, dramatic animated stories are still generally met with a puzzled indifference and a “why not just make this in live action?” response, the implication of which is that animation just isn’t on the same level or that it’s only suited to the wildly fantastic and not more realistic fare. The question implies that you need a specific reason to create something in animation and that live-action is somehow the “default” medium. I don’t have the answer to alleviating this, but I do know that taking the “it’s more than a cartoon, it’s ANIME!” position is just as laughable (and incorrect) as when the Hot Topic Goths clutch their copies of Neil Gaiman’s Sandman as they indignantly proclaim “it’s more than a comic book, it’s a GRAPHIC NOVEL!” I maintain that attitude does more harm than good. Don’t be that fan. 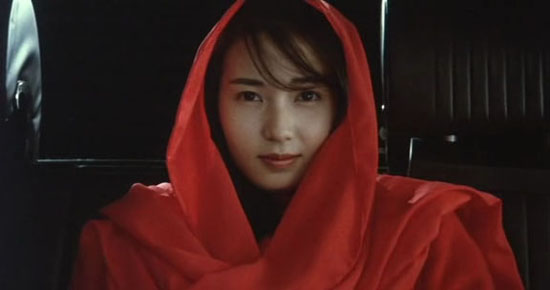 But there is definitely an argument to be made in favor of animation over live-action as a viable medium for dramatic storytelling, and one of the best examples you’ll find is by comparing the anime feature film Jin-Roh: The Wolf Brigade to the live-action films The Red Spectacles and Stray Dog: Kerberos Panzer Cops, the latter of which are available on DVD from Bandai Entertainment as part of the “Mamoru Oshii Cinema Trilogy.” These films all take place in the same setting: an alternate-past Japan in which Germany won the Second World War and armored “panzer cops” tasked with keeping the peace just might be taking matters a bit too far. I guess when you look the part of an iron-clad samurai crossed with the Nazi SS you’ve got to act it as well. Even though they’re all part of the long-running Kerberos Saga, they differ greatly in tone and presentation.

To properly do justice to depicting an alternate-world Japan full of German billboards, automobiles, and the like in live-action would require one of two things: a whole lot of physical set construction on the grounds that these places and things don’t actually EXIST, or a whole lot of post-production effects work. Effects seems to be the path everyone’s taking these days, and I’ve always thought it odd that people will gladly go to see live-action effects-laden summer blockbusters—which have so much CG that they may as well be considered animated—in droves, but balk at the idea of watching a cartoon that doesn’t involve musical numbers or talking animals. But whether you go with practical effects or CG, you’re talking about a lot of money. Good special effects don’t often come cheap, and any rational person—which is to say, most kaiju or tokusatsu fans are excluded from this—can plainly see that Japanese live-action productions are not traditionally known for being extremely high budget affairs. 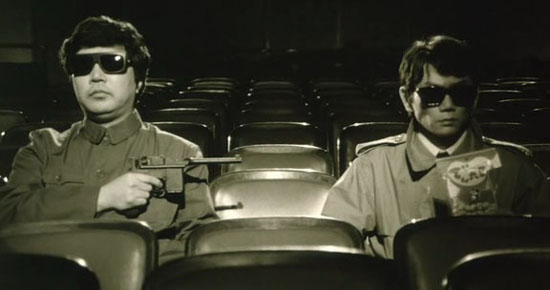 In light of this, it’s not surprising then that unlike Jin-Roh, the alternate-Japan setting of both The Red Spectacles and Stray Dog looks pretty much the same as our own since they’re very low-budget films and can’t afford to build all that stuff which just serves as a backdrop to the story anyway. Despite the fact that they’re supposed to be newer models than the Jin-Roh ones, the live-action versions of the Protect-Gear armor don’t look quite as impressive either. Perhaps director Mamoru Oshii was aware of the limitations of his live-action budgets because both The Red Spectacles and Stray Dog are laden with intentionally goofy humor and absurdity to the point of being almost farcical nonsense…except when they’re not. They’re awfully inconsistent in tone, and while that’s not necessarily the end of the world – heck, I love to read Osamu Tezuka’s manga which is famous for that – most fans who watch Jin-Roh first and live-action movies afterwards probably won’t enjoy themselves in the process.

Jin-Roh is considered a high-budget anime production, but even high-budget Japanese animated films don’t tend to have budgets higher than $10 or $20 million. Next time someone asks what  the point of doing “realistic-looking” animation is over live-action, have them think about that along with how much it costs to make whatever the latest live-action superhero movie was. When it comes to getting mileage out of a dollar, anime’s got the edge over live-action. 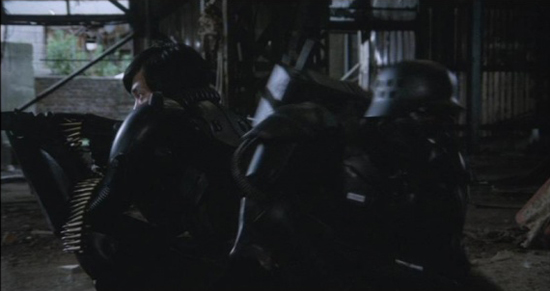 – Garm Wars: The Last Druid review
– Jin-Roh: The Wolf Brigade
– Stray Dog Of Anime: The Films of Mamoru Oshii Review
– Mamoru Oshii and the Magicians of Picture Creation
– Mamoru Oshii: The most opinionated man in anime