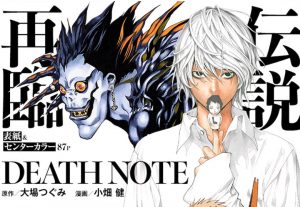 It’s safe to say that everyone was pumped when a brand-new Death Note manga chapter was revealed. This one will be an 87-page chapter from the original team of Tsugumi Ohba and Takeshi Obata, and the English Shonen Jump announced plans to make it available for free digitally as it launches.

The full chapter will go live in English on Monday. This will come just a day after a new Shonen Jump series—Asahi Sakano’s Guardian of the Witch—makes its debut on the platform. Check out Shonen Jump‘s announcements for both below.

SPECIAL ONE-SHOT ALERT! Don’t miss the 87 page Death Note one-shot on Monday! Ryuk’s not done toying with the human race yet! Read it FREE from the official source on Monday! https://t.co/7W1z2maNa4 pic.twitter.com/CxH7vV6Ms6

NEW SERIES ALERT! Guardian of the Witch by Asahi Sakano starts Sunday! Guarding a witch is never easy, especially one that’s a brat! Read it FREE from the official source this Sunday! https://t.co/7W1z2maNa4 pic.twitter.com/e6oEEFniqZ

Mangacaster: An Interview with Ed Chavez, founder of DENPA
Switch is Now Nintendo’s Third Best-Selling Console of All Time