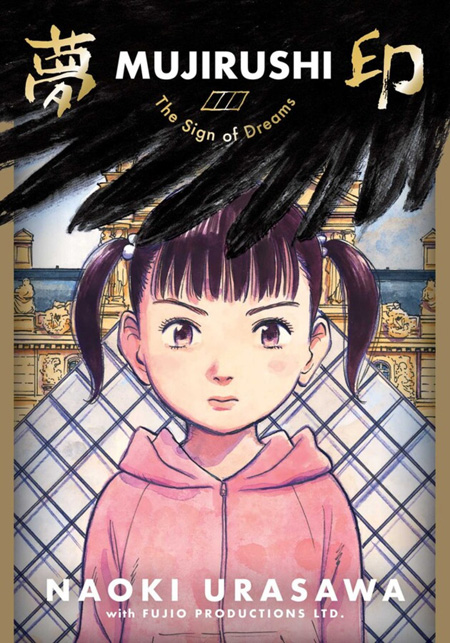 For fifteen years, the Louvre has commissioned graphic novels from top cartoonists around the world. Seinen manga legend Naoki Urasawa (20th Century Boys, Pluto, Monster) joins the ranks of Louvre artists with Mujirushi, a heist thriller that combines the brainy eccentricity of a colorful French art film with the off-kilter hardboiled sensibility of, well, a Naoki Urasawa manga.

Takashi, a thirtysomething guy with a scraggly goatee and a perpetual hangdog expression, is in the dumps. After a series of bad financial moves, the latest of which has left him with a warehouse full of unsellable novelty masks, his wife walks out on him and their precocious, ponytailed little daughter Kasumi. A message tied to a crow’s leg leads Takashi and Kasumi to the seedy La France Research Institute and its hyper, bucktoothed Director. (The Director is an Urasawa-fied version of Iyami, the Francophile antagonist of the children’s manga and anime series Osamatsu, a pop-culture reference that will fly over the heads of most American readers.) The Director woos the unhappy pair with tall tales of “La France,” then ropes them into flying to Paris to steal his favorite Vermeer from the Louvre.

Further complicating this chain of shaggy-dog stories are such improbable details as a friendly French fireman, an art forgery ring, the mysterious “sign of dreams,” and Beverly Duncan, the corrupt American president, who looks exactly like Donald Trump in drag. As in many of his manga, Urasawa seems to challenge himself to work in as many far-flung ideas as possible. But this breezy one-volume adventure gives him the chance to be more openly funny, indulging in unapologetically silly twists and building to an action-packed finale in which, improbably, every thread ties together and the characters careening toward disaster might crash into a happy ending after all.

Urasawa’s art is, as always, a lavish treat. His work has the detail and realism typical to seinen manga, but with more flexibility, expressiveness and humanity. He loves to draw distinctive faces, and here he pushes toward caricature, leading to some odd-looking panels in which the cartoony Director poses with photorealistic renderings of French public figures. Urasawa is a master of pacing, and in Mujirushi he proves he can plot a feather-light heist yarn as surely as he constructs dark thrillers and science-fiction epics. Recommended.