Rohan at the Louvre 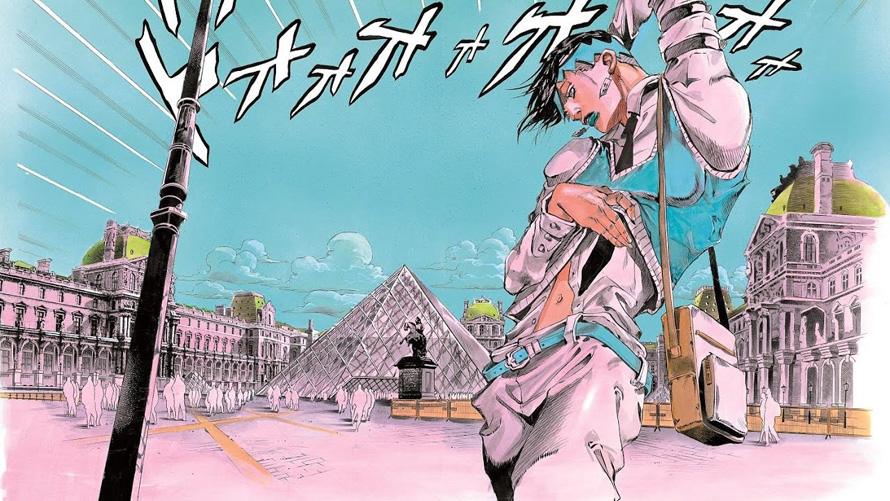 There are numerous anime/manga series that are hugely popular in Europe, but not particularly well known in North America. Amongst the series that earn more appreciation across the pond is Hirohiko Araki’s JoJo’s Bizarre Adventure. Much of Europe loves Araki’s magnum opus, and Araki is more than happy to love back. Italy’s already received a lengthy, romantic letter in the form of JoJo part 5, and with the publication of Rohan at the Louvre, it would appear that it’s time for France to get its due in a one-shot involving one of the country’s most famous establishments. 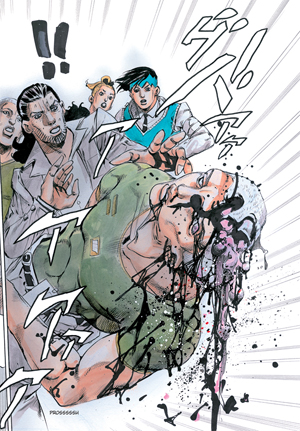 It’s something of a surprise to see this printed in English, as the release of JoJo’s Bizarre Adventure part 3 didn’t exactly set the English manga market on fire. Then again, Rohan at the Louvre is less aimed at the bovine teenagers grazing the manga aisles at Barnes and Noble and more toward the sort of mature, comics-as-artform crowd your average Vertical release chases. (NBM releases very little manga – their sole other release appears to be Stargazing Dog – though they are certainly no stranger to publishing foreign comics material in English.) It’s packaged in a very handsome release: high-quality, full-color paper, a matte hardcover binding (but with no dust cover, sadly), and notes about the Louvre itself at the end of the book. It’s also published in unflopped format with original Japanese sound effect illustrations, no doubt to meet Araki’s exacting standards (The English release of JoJo part 3 had the same presentation).

The titular character of Rohan at the Louvre is one that will be familiar to longtime JoJo fans: Kishibe Rohan, the extraordinarily talented and famous manga author with a pretty rad special power. Using his “Stand,” Heaven’s Door, Rohan can look into the hearts and memories of whomever he pleases, quite literally reading (and even rewriting!) them like a book. As the comic isn’t necessarily intended strictly for JoJo fans, it doesn’t go into the complicated minutiae of Stands and what they are – it just tells you that Rohan has this power, here’s how it works. Compared to the complicated mythology of JoJo proper, Rohan at the Louvre is considerably easier to jump into for the uninitiated, which makes it rather noteworthy.

The book is also interesting in that it’s Araki’s first full-color comic. He didn’t take any shortcuts on this one, either: everything is hand-colored with traditional acrylics in the same way as his poster/cover art. I couldn’t be happier about the use of natural media here. CG-colored art, as lovely as it can be, often has an artificial, almost-too-perfect feel to it that can sap 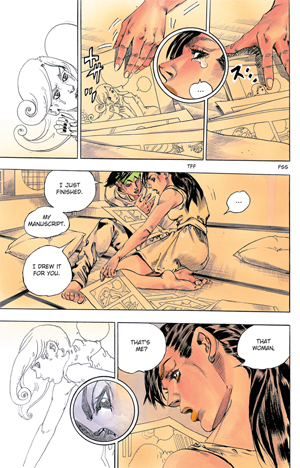 art of a lot of its charm. (I’ll argue for days on end that the works of Akira Toriyama and Masamune Shirow were far more appealing when they used paints and Copics instead of Photoshop.) There’s something beautiful about the acrylic coloring Araki continues to use in his art, however – its little imperfections and unevenness give it a rawness and emotion that CG simply can’t replicate. The overall style is representative of the more evolved look Araki has developed since JoJo part 3. A liberal use of unnatural, clashing colors and flamboyant, impossible poses also contrasts sharply with the more realistic-looking, intricately detailed character and background art to create a strange, almost disorienting mix of the real and the utterly fantastic. It’s a style that is uniquely his, and despite how outright odd it can seem to a first-time viewer, its appeal becomes evident after continued exposure.

The story is told with Rohan as narrator, first telling the readers about a strange encounter he had as a teenager, where a girl told him about a cursed painting made from the darkest, purest black ink imaginable. (“As long as light exists, nobody can perceive such blackness with one’s eyes.”) Years later, a conversation with a few friends spurs a memory of the encounter, and Rohan goes to seek out the painting, which rests in the possession of the Louvre… except that nobody there has ever heard of it, and it’s listed as being in a storage facility long since abandoned. Alas, saying more than this would likely constitute spoilers for what is a fairly brief one-shot. Though it’s not hard to guess the direction the story eventually takes; in true Araki fashion, the way the events unfold is far more interesting than the reader probably expects.

It’s a very entertaining read, though it’s not without a few flaws. The English translation, while far from bad, feels a bit too literal and unnatural-sounding in a few places. The brevity of the work itself is also a double-edged sword: while Rohan at the Louvre doesn’t require a massive time commitment to read, it also feels perhaps a little too quickly-paced to allow readers to really connect with the mystery and perils the characters face. The actual Louvre surprisingly doesn’t get a lot of panel time – much of the action goes on back in Japan or in the museum’s storage facilities. Rohan’s power, while shown at the beginning, isn’t really explained as well as it could be, so when he inevitably uses it during the story’s climax (in a very clever fashion), readers unfamiliar with JoJo may be left scratching their heads as to how it actually worked.

Perhaps the most contentious point among JoJo fans, however, might be the portrayal of Rohan himself. It’s been theorized amongst fans that Rohan is Araki’s own “Gary Stu” stand-in, the sort 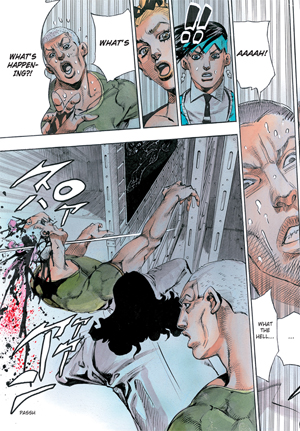 of idealized self he wishes he could be. There are, in fact, points in the story where Araki seems to knowingly bring this association up (“An editor told me my female characters weren’t at all sexy”) as a wink and nod to his fanbase. Yet Rohan’s eccentric and oftentimes abrasive personality in JoJo and other spinoff comics he’s appeared in seems to have been toned down somewhat. While he’s still charmingly aloof (at one point he chides some French fans asking for autographs by deriding their sloppy dress in a place of artistic masterpieces), the character comes across as a little bit different and, perhaps, “softer” than usual. It’s undoubtedly a minor change for the benefit of new readers so they can better relate to Rohan, but longtime JoJo faithful might be a bit taken aback by the lack of, well, “Rohan-ness.”

Rohan at the Louvre is an odd release, but one that’s well worth a look. It’s the sort of bizarre, distinct, and memorable one-shot manga that rarely ever sees the light of day over in North America – and it’s doubtful it ever would have without the Louvre themselves pushing to get this and several other specially commissioned museum-themed comics released internationally. Anyone who enjoys the work of Araki – or just likes interesting non-mainstream manga in general – would do well to pick this book up. 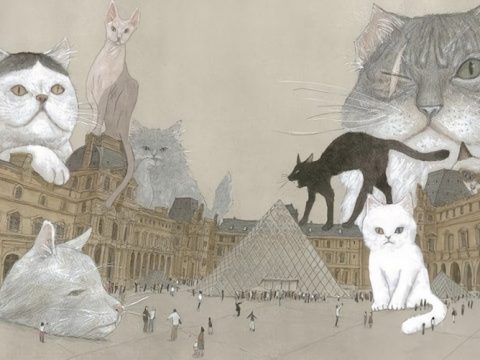 Cats of the Louvre [Manga Review]