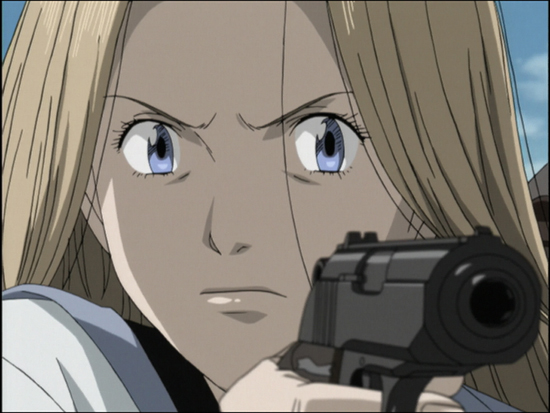 The mystery-thriller Monster, based on Naoki Urasawa’s impressive manga series, reminds me why I jumped headfirst into the anime hobby: for the chance to experience excellent storytelling.

Taking place in Germany, we are introduced to Dr. Kenzo Tenma, a young Japanese physician who has great talents, matched only by his desire to help anyone who enters Eisler Memorial Hospital where he looks to gain the position of chief resident. His talents have won him the favor of the hospital’s head administrator Mr. Heinemann, who publicly touts Tenma’s talents as a reason his facility should receive special funding and media attention… though often without mentioning Tenma’s name. Meanwhile, the director’s daughter, Eva, is planning out her future as Tenma’s fiancée so she can have the life of luxury a woman of her status demands. 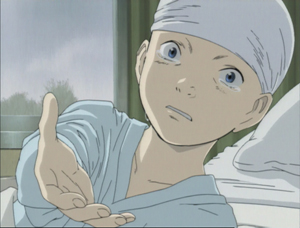 Tenma starts to question the direction of his career, though, upon learning of a night when his skills were directed to a famous opera singer, while a lesser, slower physician was assigned to a Turkish construction worker, who died as a result. This leads to a fateful night when Dr. Tenma is called to Eisler to treat two young shooting victims. The boy, Johann Liebert, has been shot in the head and requires a complex brain surgery for survival. Johann’s sister Nina is in complete shock. Though she has no physical wounds, she is only able to mutter a couple words.

Tenma prepares for surgery when at the last minute he receives orders from Director Heinemann to stop what he’s doing and prepare to operate on the Mayor, a politician favorable to Heinemann’s hospital status. The Mayor has just come in for treatment, and Tenma is ordered to allow one of the lesser skilled doctors to operate on Johann. Tenma defies this order and performs the surgery on Johann instead. As a result Johann survives, but the Mayor is not so fortunate.

Tenma pays the price for his convictions as another doctor is promoted, Eva breaks off the relationship, and Heinemann tells Tenma to abandon any hopes for advancement, intense research, or of leaving Eisler to further his career at another hospital. He will work the rest of his life at exactly the same level. The young doctor partially accepts his fate as he truly wishes to help anyone who need him, but one night while standing over Johann’s hospital bed, he vents his frustration about the situation, the persons responsible and his inability to gain a promotion.

In the following days, a series of murders occur (most notably Director Heinemann’s as well as a couple other rivals) and strange circumstances come to light, all of which benefits Dr. Tenma who, as the story flashes forward by 9 years, has become the chief neurosurgeon at a revamped Eisler Memorial Hospital. Police suspect him but have no real evidence of his involvement. Tenma though begins to suspect that Johann is a more capable boy than he first appeared… 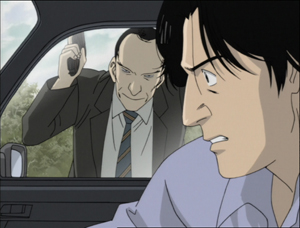 The truth of this suspicion is far more sinister than anyone could guess, as conspiracies, atrocities and pathologies figure heavily into the deepening mystery that Dr. Tenma falls into and struggles to free himself from, possibly at the cost of his own morality. Monster is named not only for the horrifying events one character has caused, but also Tenma’s evolving nature away from one sworn under the Hippocratic Oath to that of murderous obsession. Much of what we see emulates a passage from The Revelation of St. John, which opens the series as follows: ‘And I saw a beast rise up out of the sea, having seven heads and ten horns, and upon his horns ten crowns, and upon his heads, the names of blasphemy. And they worshipped the dragon which gave power unto the beast: and they worshipped the beast, saying, “Who is like unto the beast? Who is able to make war with him?” ‘

The story moves through various parts of Eastern Europe (primarily East Germany), all the while the good doctor looks to redeem himself and clear his good name, as a relentless BKA detective named Inspector Lunge doggedly pursues all aspects which may lead to solving this murderous mystery and others tied to it.

It’s obvious for the manga that Urasawa pulled influences from some of the best-written suspense thrillers and political dramas to create this bleak yet well-developed world we’re immersed in. Much of the show feels like The Fugitive mixed with Seven in a cold war aftermath setting, with dire consequences for many people involved. Although it has aired on SyFy and Chiller, this show would probably be a good fit for BBCA or PBS as well.

Urasawa’s characters are typical fare for his adult-minded series like his work on Fashionable Judo Girl Yawara and Master Keaton. Series director Masayuki Kojima andcharacter designer Shigeru Fujita gained good experience while adapting Master Keaton as an anime and that has proven valuable in 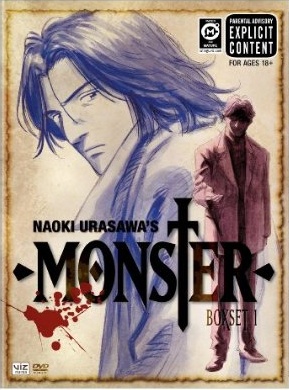 bringing Monster to animated life. Many of the characters are drawn with less exaggerated features than most of the shonen-styled stories typically imported to the American market.

Viz Media has done a decent job with this first boxset. The English voicework sounds good and doesn’t fall below the modern standards of the industry. It occurs to me that it might be a bit strange to hear Japanese and German people speaking English the whole time, but then again, no one was directed to perform with horrible attempts at accenting, so the dub isn’t nearly as terrible as it could’ve been.

I’ve seen the entire series elsewhere and can honestly say it is one of the 10 best anime of the past decade. (Yes, I actually made such a list, but that’s a different article.) With 15 episodes in this set and 64 left to go, it would be a real shame if the viewing public didn’t get to see this engrossing series to its conclusion. Fans of intrigue and intelligent character interaction should definitely pick up Viz’s releases of Monster. They will not be disappointed.