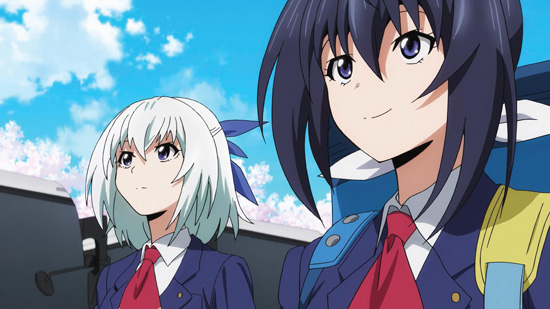 By all accounts it appears as if sports anime is more popular than ever. It’s taken some time to really sink its hooks into Western fans, but at this point there’s something legally streaming, and either running now or having aired very recently, for pretty much everyone. We’ve got Kuroko’s Basketball for the hoops-heads, Haikyu!! for nonstop volleyball action, All Out! for fans of hunky rugby players, Teekyu for the folks who don’t actually want to ever see tennis, and Keijo!!!!!!!! for fans of the popular sport in which girls have to knock each other in the water using only their butts and boobs.

I’ll let that last one sink in for a moment.

Alright, it’s clear that we’re in another world with Keijo!!!!!!!!, but can something so immediately risqué ever be taken seriously? Isn’t this something that would have been released on Media Blasters’ Kitty Media label back in 2001? While those are both understandable assumptions, the reality of Keijo!!!!!!!! is actually much stranger. 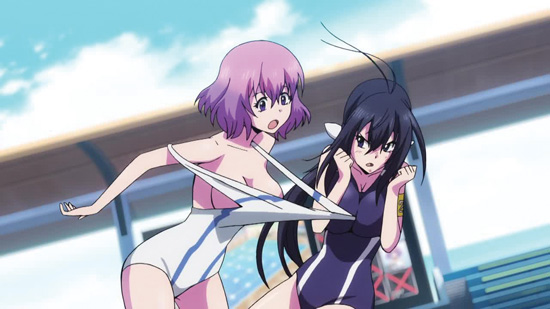 A series as brazenly unapologetic as Keijo!!!!!!!!—don’t you dare forget a single one of those eight exclamation points—deserves a suitably stupid elevator pitch. So, here goes nothing: Imagine an entire anime series based on that one Butt Battle mini-game in the Dead or Alive Xtreme series, except in this world the game is big enough to be a major gambling sensation. The sport of Keijo is simple enough at a glance. Two or more girls get on a platform that’s floating on a body of water. To win, one must either incapacitate the other or knock them into said water using only one’s posterior or breasterior (real word, look it up). There are Keijo schools, and the promising athletes who attend command major media attention.

One of these athletes is Nozomi Kaminashi, an energetic girl with gymnastic skills and a noble cause. She wants to become the richest Keijo player in Japan so she can help out her siblings, and she has all the potential power of the fledgling manga/anime lead she is. She joins the school along with best friend and former judo champion Sayaka Miyata, and they quickly find themselves fully immersed in the intense training for which the sport is known. That means lots of squats, lunges, and whatever other outlandish exercises they can come up with for strengthening glutes. 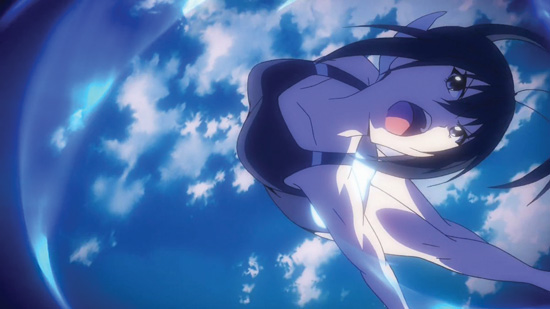 If you think Keijo sounds like a one-note sport, think again. The thought put into it is actually borderline alarming, and though I haven’t read it myself I assume we have original mangaka Daichi Sorayomi to thank for that. Not only are competitors split into different technique categories like Infighter and Outfighter, each character has the potential to unlock an intensely powerful special move. Yes, that includes moves such as the VACUUM BUTT CANNON, an attack so devastating that Nozomi is barred from using it after she accidentally busts it out in a training exercise. Why, if she were to use it again, she would put incredible strain on her hips and surrounding joints, potentially dashing any hopes of going pro! This is because the move calls for violently spinning your butt and using your hips like a whip, hence the alternate name of the manga, Hip Whip Girl!

In one of the early heated battles, Sayaka finds herself against the ropes, potentially facing a tough loss. That’s when she pulls an ace out of her sleeve in the form of a self-inflicted wedgie. Before her opponent gets a chance to ask how a wedgie could possibly help, the tables turn, and she’s suddenly dealing with an overwhelmingly fast battle. As for the “science” behind that, it’s all accounted for in the world of high-stakes Keijo. By making her swimsuit ride up, she’s able to reduce its natural constraints and pressure to gain more speed. I’m sure there’s a Neil DeGrASSe Tyson of Ass-tronomy out there (that’s a term the series actually uses, by the way) to dispute the exact equations, but you gotta give it to ‘em for sticking with the full explanation. 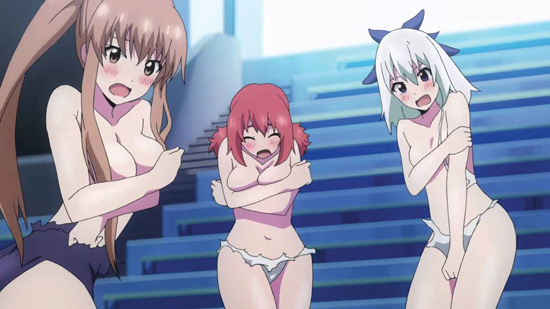 All the trappings of proper shonen sports serials are present and accounted for, they’re just buried under a mountain of lewdness that will no doubt turn off your average viewer. Keijo!!!!!!!! is the type of anime that can both bring in new fans and embarrass existing ones, but if it’s nervous about either prospect it isn’t showing it. That’s one of the key reasons the series surprisingly works. When I first saw previews I never pictured myself typing those words, but it’s true. Keijo!!!!!!!! succeeds because it plays everything so straight. It’s not without its share of gags, but they’re never at the expense of the sport itself. As far as the characters and the overall world are concerned, Keijo is a legitimate event, and training for and excelling in it is top-tier success.

Keijo!!!!!!!! is a very nice-looking show when it’s in action. It’s clear that the staff actually cares about what they’re making, though judging from some of the camera angles there’s a little more incentive there than simply putting on a good show. When the series first began I had a stray though that it was essentially doing for butts what Hajime no Ippo did for boxing gloves. I didn’t expect so many people to echo that sentiment independently. It makes sense when you see the battle scenes, which explode off the screen as butts and breasts fly at one another at impossible speeds. Sweat and water burst off bodies in rapid succession, and legs contort and twist into positions so unbelievable that they circle right back around to plausibility in motion. 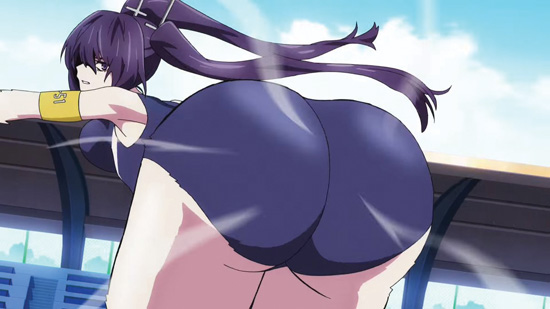 The culprits behind this full-body action do their dirty work at anime studio Xebec, which previously handled animation production for series such as Martian Successor Nadesico, Negima!, Upotte!!, and Argevollen, among many others. Fantasista Stella director Hideya Takahashi helms the adaptation, with Takao Kato (director of Rio—Rainbow Gate!, To Love-Ru, and more) on series composition and Keiya Nakano (AOKANA: Four Rhythm Across the Blue, Atelier Escha & Logy) on adapted character designs. The staff keeps what could be a completely disastrous show well above water, making it fun without making fun of it. It’s more impressive than it sounds on paper.

I’m not going to go so far as to say Keijo!!!!!!!! is important; far from it. But maybe we need an anime that makes loud proclamations like, “I’ll show you just how strong my butt has gotten!” with a completely straight face. For that alone, we salute this burgeoning sport.