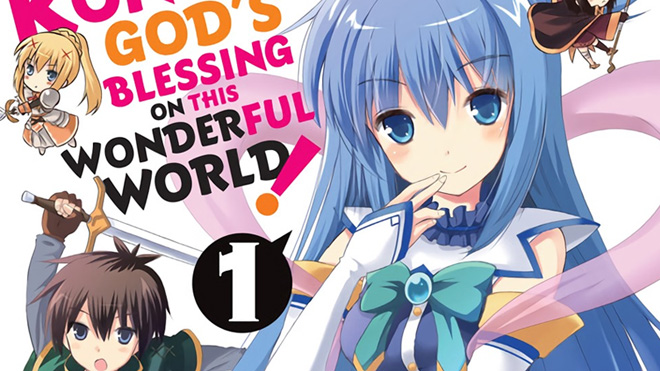 Kazuma, an antisocial gamer (the other characters call him “hikiNEET,” combining a slang term for shut-ins with a slang term for the unemployed), is killed in an uncharacteristic and ill-advised act of heroism. In the afterlife, he’s offered the opportunity to become a hero in another world, a world of fantasy and adventure that looks exactly like a generic RPG. Naturally, he accepts.

In a mildly interesting comic, Kazuma might have his expectations shattered as he learns wacky lessons about the differences between playing video games and living in a real magical realm. But this is a nerd wish-fulfillment manga, so there are no differences, and Kazuma is immediately installed at the head of a party consisting entirely of cute girls in easily recognizable character classes.

The team includes a mage who can only blow things up, a masochistic paladin who enjoys getting her butt kicked, and Aqua, the water goddess who presented Kazuma with the offer in the first place. All three are pretty useless adventurers, even Aqua, who is downgraded to a mere priest (because there’s no RPG class for goddesses, and yes, that’s the actual in-universe explanation) and doesn’t get to rock cool divine powers. Kazuma, meanwhile, shows a talent for magic and picks up the 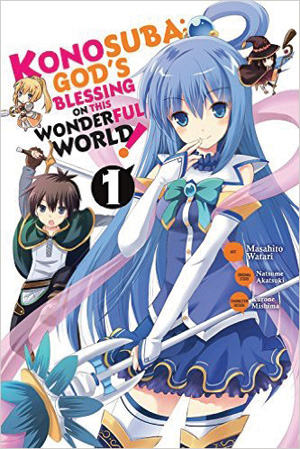 special ability to steal girls’ underwear because, of course, he would. Together they go on miniquests that tend to peter out after a dozen pages, exactly as if they were based on stand-alone chapters in a light novel series.

By now, if you’ve ever read manga in your life, you already know what the art looks like: anime-style moe characters in costumes that suggest a general idea of “fantasy world” but nothing specific about what that world might be, some half-hearted castles and stuff sketched in the background by assistants, and lots of T&A. The occasional funny concepts, like Aqua’s side job as an erotic soap sculptor or a running gag about vegetables coming to life, tend to be overlabored and get run into the ground. There are approximately three million comedy manga about RPG-style fantasy adventurers, so surely fans of the genre can do better than this. Maybe dig up old Slayers comics or something?