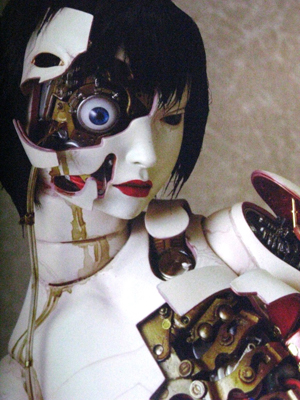 In the small pool of prominent anime directors, Mamoru Oshii seldom requires introduction. In a medium largely defined by a narrow set of frequently parroted visual tropes, his geometrical compositions, calculated pacing and obsession with basset hounds are in a league of their own. For crying out loud, this is the man who managed to smuggle Hitler and Christ into Urusei Yatsura and turned Masamune Shirow’s love affair with skin-tight cat suits into an art-house metaphor for human vulnerability. That subversive artistry is the type of thing that gets people into museums.

At the aptly named Hachiouji Dream Museum, “Oshii Mamoru and the Magicians of Picture Creation” recently finished its run, but it still merits an examination, however tardy. As the name would imply, the exhibit doesn’t focus exclusively on Oshii himself. For certain, he does take center stage and the vast majority of his oeuvre is represented, including his first solo effort Angel’s Egg, and his more obscure live action work, all the way to The Sky Crawlers and Assault Girls, albeit with the notable exceptions of his Urusei Yatsura films and some of his OVA work such as Twilight Q. Yes, Oshii is the name on the marquee but the majority of the pieces on display come from Oshii’s many collaborators, rather than the man himself.

One of the first pieces lined up in the exhibit underlines the point: Oshii, as talented a filmmaker as he may be, would be a quill-less porcupine if not for the men and women around him. Perhaps a more flattering analogy would be to his many cybernetic characters, with his brain merely the driver for the many limbs that make it happen. In any case, the section on Innocence shows how Oshii’s rough sketch of Batou holding his basset hound Gabriel gets transformed (dare I say technologically enhanced?) from a minimalist set of blobs into the moody, much more lifelike image that became the film’s theatrical poster with the aid of numerous staff members at Production I.G. Here Oshii is shown to be the idea man, a clockwork maestro who writes and conducts the melody performed by those under him. 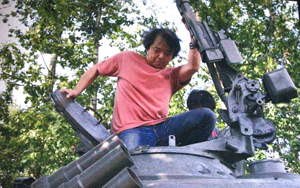 As the exhibit is presented out of chronological order, the path of the halls takes you from Innocence only to go right back to the storyboards for Angel’s Egg, which, in turn, is right across from statues of dogs and fish clad in medieval armor from the relatively obscure 2005 theatrical production Open Your Mind. The connecting thread is concerned more with themes and motifs than with chronology. Still, it is amusing to pick up some small details—how Ghost in the Shell’s Batou visibly ages into the broodier character we meet in Innocence; how the elegantly drawn, detailed storyboards for Angel’s Egg become little more than napkin doodles in the wake of Sky Crawlers, as if Oshii just said “I’ve already proven what I’ve got, let’s just get this for the other guys to play with.” The exhibit also has some amusing anecdotes, such as a broken microphone, which is helpfully explained as the unfortunate result of Oshii firing a pistol point-blank into it during audio production of Avalon, seconds within being told to not do exactly that.

The scope and range of I.G.’s work and assistance to Oshii can be seen in the variety of mediums on display—photography, sculptures, music boxes, and a lot of inventive props (including some from Oshii’s upcoming take on Gigantor, Tetsujin 28½). With all that, it was surprising and disappointing to have a complete lack of any video displays in the exhibition. Plenty of still pictures from the films themselves and the crew’s travels all over, but absolutely nothing that moves or even audio from the often meditative melodies of Kenji Kawai that have become part of Oshii’s style as much as Susumu Hirusawa had defined the late Satoshi Kon. 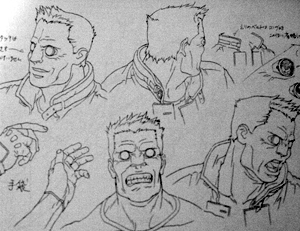 All that said, the exhibit has recently closed its doors and it’s become a moot point. What isn’t moot is what to take away from it all. With the recent death of Satoshi Kon bringing us all a wake-up call to the need for bold, young visionaries in anime, it’s easy to get swept up in the pessimism of this, that or the other. Yet, when there’s a little elementary schooler pacing around the exhibit in a daze, gazing longingly into the eyes of a Kerberos Panzer Cop as she does into that basset hound, it leads one to think the net is vast and infinite…

A Drunken Dream and Other Stories
Coolest Bonus: Highschool of the Dead BD Bundle