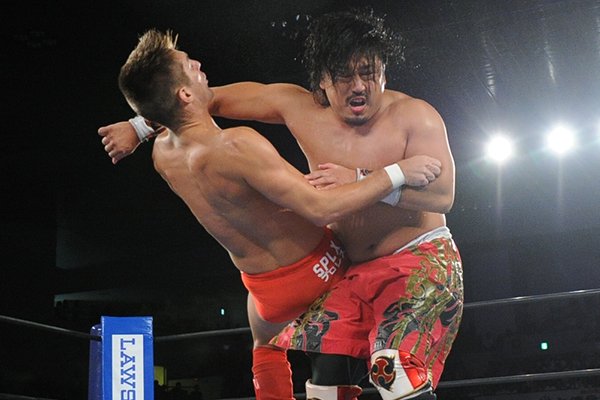 The G1 Climax stops for no one, least of all you or I. As if to prove this as fact, lovely Nagoya — and what appeared to be a decommissioned Soviet prison camp in Gifu — played host to two more nights of tournament action. 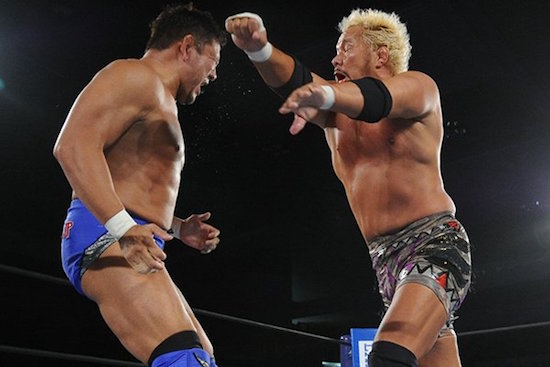 Nagata came in looking to score his first win in his final G1, but instead wound up eating a King Kong knee drop for his fifth consecutive loss.

Much like Nagata, we shall refuse to give up hope. 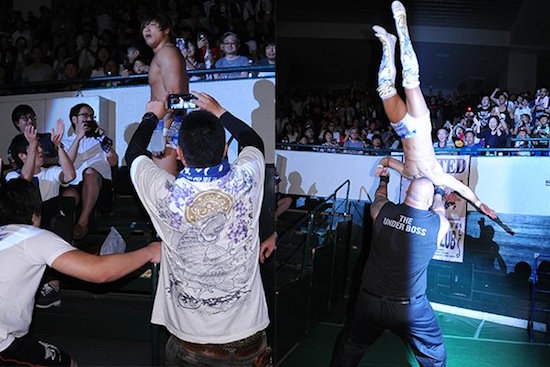 Ibushi entered the smaller man, but also the crazier. Much, much crazier. Crazy enough to attempt a German suplex on Fale and, even crazier, a moonsault from the cheap seats onto the New Zealander. Yet despite all that crazy, the bout ended with him taking a Bad Luck Fall all the way down to his third loss of the tournament. 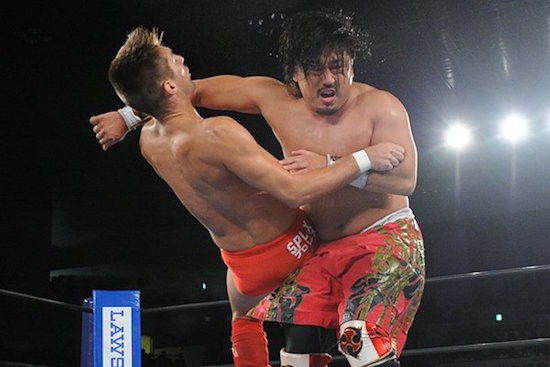 Desperado accompanied Sabre to the ring, the NJPW front office has either not received or is actively ignoring the numerous faxes I’ve sent regarding his being barred from ringside. His meddling had an effect on the match right at the start, as he distracted Goto long enough for Sabre to latch on.

Sabre then went to work, looking to utilize technique and leverage. Goto has no patience for such things. This became obvious when Goto attempted to shatter Sabre’s fragile torso with a GTR. Unfortunately, he had to settle for getting the pin instead — another two points added next to his name. 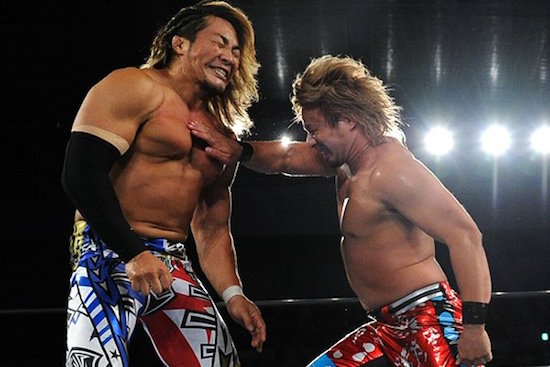 Tanahashi’s hair looked the best it has this entire tournament. The braiding, the texture, the dye-job. It was all on point. YOSHI-HASHI’s, on the other hand, appeared slightly dried out.

YOSHI-HASHI was well aware of this, and looked to up the intensity as a result. Call it overcompensating if you wish, but you can’t say it wasn’t effective, as the Head Hunter nearly put away the Ace with his patented Karma. Sadly, as with whatever amount of leave-in conditioner he’s been using, it wasn’t enough. Tanahashi laid him out flat with a slingblade, followed by the High Fly Flow for the win. His hair nothing less than immaculate as the ref raised his hand. 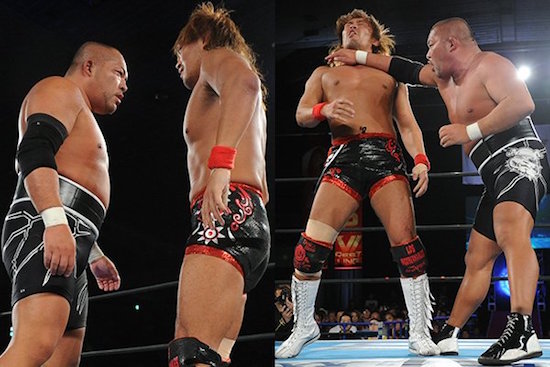 Naito has been determined to snap someone’s neck this G1, an admirable quest no doubt. But one perhaps best spent focused on a man who has a neck, which Ishii does not. I almost felt pity for Naito as he attacked the concrete stump that he had mistook for a spine.

I believe Ishii did, as well, because he kept acting as if he were actually experiencing pain. And we all know he does not. Eventually he grew tired of this charade, and turned Naito inside out with a lariat, before hoisting him up for a match-ending brainbuster. 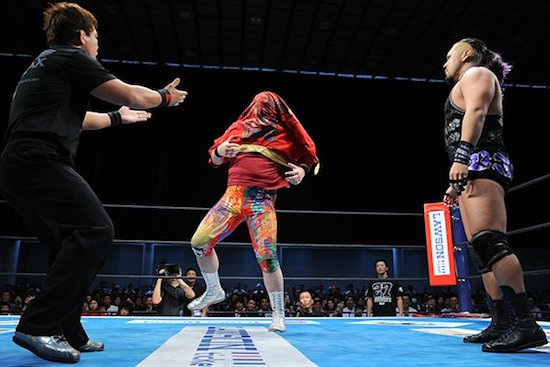 EVIL ended this before it could even really begin, pinning Yano after hitting an STO. Both sparing us of Yano’s rule-breaking antics, and revealing himself to be a surprisingly merciful King of Darkness. 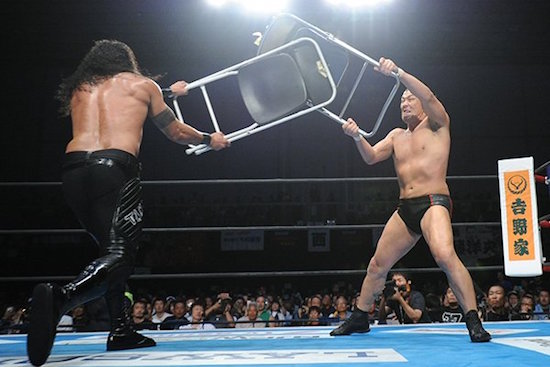 Tonga snuck up on Suzuki and Desperado as they made their way down the ramp, dropping Desperado before assaulting Suzuki. At one point, Tonga grabbed the timekeeper’s hammer, and alternated between hitting the bell and Suzuki’s head. They even brought chairs into the ring.

These men clearly have no respect for the most prestigious tournament in sports. Thankfully it was ended with an actual professional wrestling move, when Suzuki spiked Tonga to the mat with a Gotch piledriver for the pin.

This barely resembled an athletic contest of any kind, least of all one held between two honorable competitors. Rest assured, I’ll be forwarding this footage to the proper authorities. 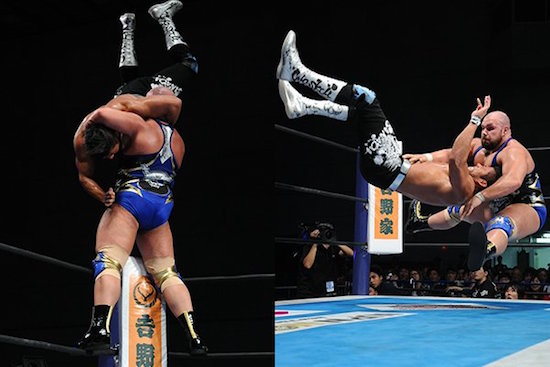 “Big” Mike has already shared a ring with Okada in this year’s G1, so he wasn’t about to be intimidated by SANADA’s handsomeness. Cold Skull still tried nonetheless, peeling off his shirt in a teasing manner midway through the bout. But it wasn’t SANADA’s looks that got him the win, it was a Skull End that dazed Elgin long enough for the L.I.J. member to hit a moonsault, and secure the three count. 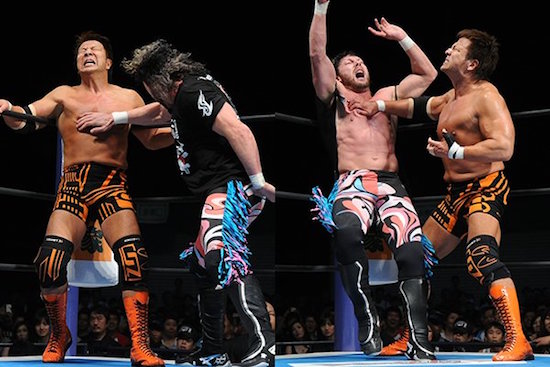 In response, Kojima landed a chest-chop so devastating that Omega’s t-shirt practically flew off of him, torn to shreds. He also yanked at the front of the shirt, but I’d like to believe it was the chop that actually did the job. Shirt shredding chops to the chest or not, it was Omega who scored the victory with a One Winged Angel. Kojima joins Nagata as the only other winless competitor in the tournament. 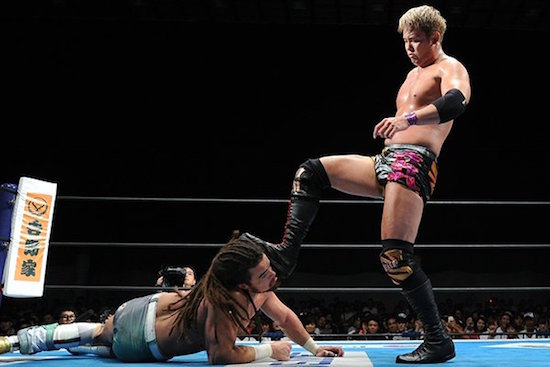 Juice appeared nervous before the match began. One would have thought he was about to face a seasoned pro, rather than a competitor of roughly the same age as him. And from the moment they locked up, it felt as if we were watching the master school the student.

At one point, Okada victimized a downed Juice, scraping the bottom of his boot on Juice’s head as he berated him. I believe he shouted something about how he had the smoother, healthier skin, but my Japanese is rusty and I could be wrong. This is now the second match in a row where Okada has stooped to such cruel and disrespectful behavior. I hope he’s OK. I feel like if he were upset about something, he’d tell me.

An emotional Juice managed to rally, and smashed Okada’s face with a closed fist, eliciting a shriek. From me, not Okada. But the burst of offense proved to be short-lived, when Okada slipped out of a Pulp Friction attempt to land a suplex and a Rainmaker for the win.

A probable scenario at this point is Okada sweeping the G1 with a perfect record, and then successfully defending the IWGP Heavyweight title against himself at Wrestle Kingdom, before ascending to heaven.