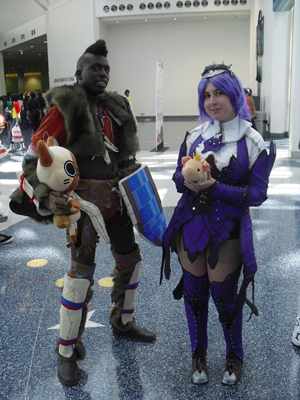 This one was more of a laid back day than the previous couple, but still there was plenty to do, especially if you were a cosplayer. Anime Expo is well renowned for the fans’ enthusiasm toward emulating their favorite characters, and this year was no exception.

There were other activities to check out during this day, though, such as Viz Media’s panel about their releases, which included manga such as Bakuman, Genkaku Picasso, Kuro Zakuro, Story of Saiunkoku, and House of Five Leaves. They also spoke about the DVD release of Vampire Knight

As to new acquisitions, Viz Media announced they’ll be publishing the manga Mistress Fortune, Sakura (The Legend of Princess Sakura), Oresama Teacher, and Ai Ore, while the only anime they mentioned licensing was Nura: Rise of the Yokai Clan. During the panel, they managed to give out several prizes to attendees but didn’t have time to answer questions in the end.

After a while of taking in impressive cosplay displays and a few good works in the AMV Finals replay (more on this in a bit), we decided to check out the Gundam Unicorn screening, with an opening panel hosted by Bandai Entertainent’s Robert Napton, series ADR director Mike Sinterniklaas, and voice actress Stephanie Sheh—who portrays lead female character Audrey Byrne in the show—which has been exclusively available on Amazon.com, Playstation Network and Bandai Entertainment’s site. After seeing this first episode, set in the Universal Century continuity, I have to say I’m rather intrigued thus far. It’s set three years after the events of Char’s Counterattack; there’s the usual mix of politics and mecha action, but the real fun as a Gundam fan is figuring out who these characters are and why they’re so important. We’ll do a full review later but this was a nice episode to see. 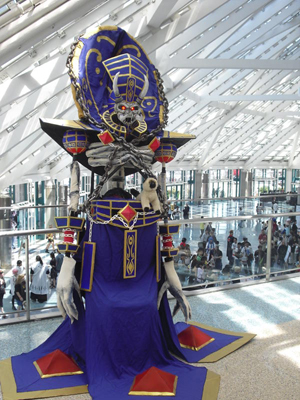 We wound up watching the next video in the room as well, namely the new Trigun movie, Badlands Rumble. Funimation’s Marketing Director, Lance Heiskell, came to warm up the crowd before introducing Adam Zehner, Director of Licensing and Acquisitions, who spoke about how the film’s producer, Shigeru Kitayama, came to want to show this movie after coming to Anime Expo one year prior. He then introduced Shigeru Kitayama himself, who thanked everyone for coming to the screening. We’ll have more info on the presentation in our review, but I can say everyone had a pretty good time.

Afterward it was time for Aniplex’s Gurren Lagann

We were only able to see part of this program, though, as it ran concurrently with the Masquerade. So we headed over to the Nokia Theater which was a much improved venue over the exhibit hall from last year’s event.  The costumes and hosts were pretty lively and mostly entertaining. The most memorable were the Sailor Moon 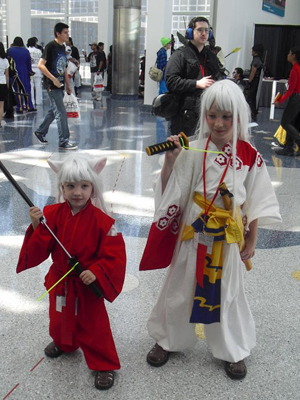 I have to say these were some impressive videos. Naturally the winners had familiar anime like Gurren Lagann and Fullmetal Alchemist. The Soul Eater video to “This Is Halloween” by Marilyn Manson was also pretty cool and innovative. I’d have liked to have seen the well-constructed “Children of Daicon” video done in tribute to Gainax’s original project win something, but the winners were all very deserving. The big one that garnered the most attention from judges and fans alike was entitled “A Word From Our Sponsors,” and made everyone think of Pizza Hut and McDonald’s in rather amusing ways.

So ended day 3 of our west coast adventure, and with one more to go there were still some nice sights to see.

I have to give a lot of credit to my translator Rika Everett and my secondary photographer GAI. Were it not for these two helping me out, much of the recording of what you see in these reports from that weekend would not have been possible. So a giant dose of thanks to these people for their serious efforts.