The problem with evil overlords is that they spend entirely too much time lurking in their ill-lit, Gothic-arched castles, grooming their widow’s peaks and rehearsing their maniacal laughter. Just once I’d like to see a tyrannical demon-king with a nice summer cottage by the sea, one who’s willing to exchange his skull-goblet brimming with the blood of his enemies for a piña colada and his evil sorcerer cloak and cowl for some flip-flops and a comfy Aloha shirt. Arch-villains just don’t know how to relax. If I were an all-powerful despot invested with diabolical powers from the Underworld and bent on world domination, the last thing I’d do is advertise that fact. 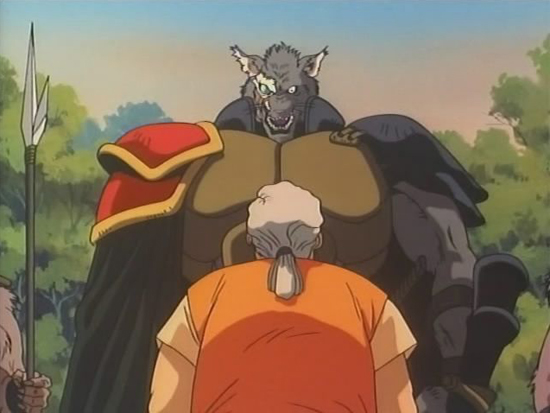 Speaking of evil overlords, today’s excavation from the Vault of Error is Mōryō Senki Madara, or simply Madara as it is known in the United States. I use the phrase ‘known in the United States’ loosely, because although Madara was a reasonably successful franchise in Japan, I’ve never heard anyone mention it in my twenty plus years of anime fandom. Madara began life as a manga written by Eiji Otsuka (MPD Psycho, Kurosagi Corpse Delivery Service) and illustrated by Shou Tajima. Originally published in 1987, it ran for a total of ten years and five volumes. Konami and Datan Polystar later adapted Madara into a trio of cartridge-based RPGs for the Famicom and Super Famicom game systems. Madara was also adapted into a two-part OVA series directed by Yuji Moriyama (Project: A-ko, Agent Aika), with fairly typical results for a long-running fantasy series condensed into a two-hour runtime. Although the video games were never localized, CMX Manga, a subdivision of DC Comics that went belly-up in 2010, released an English translation of the Madara manga in the United States. Media Blasters, a company which despite numerous difficulties somehow manages to cling to a hazy, twilight existence, released the Madara OVAs on U.S. home video in 2003. 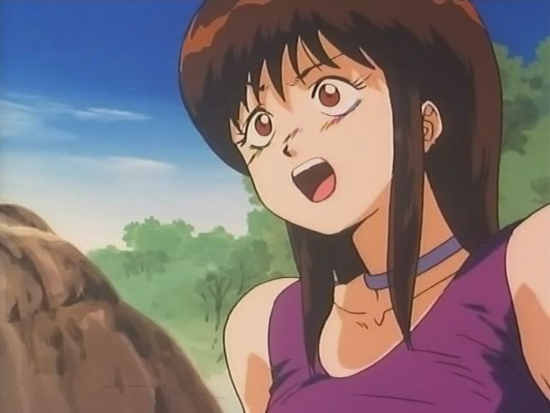 I don’t remember when or where I bought this DVD. I have no idea how long I have owned it nor how long it has sat, shrink-wrapped and factory-sealed, on my shelf. I was cleaning and re-organizing the other day when I discovered it by accident. My exact thought process was: “Madara? What the heck is this? How did it get on my shelf? And where on Earth is my copy of Frankenstein Conquers the World, damn it?”

On a whim, I decided to review it, and I’m glad that I did. 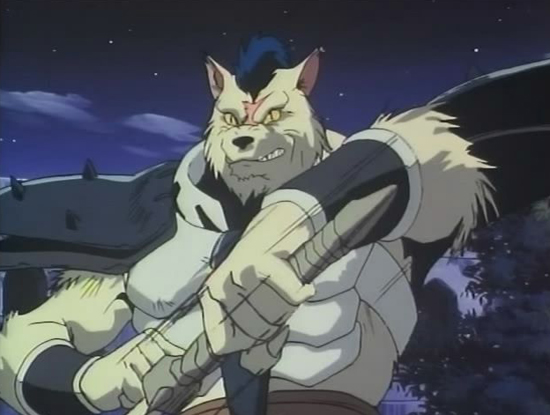 Make no mistake: Madara is not an outstanding work of art. The animation runs the gamut from smooth, almost theatrical quality visuals to choppy stuff that looks like they skimped on the in-betweening. The character designs are typical early Nineties fare. The story-line is as generic fantasy as generic fantasy can get. There’s a tyrannical demon-lord named Miroku. He’s voiced by the incomparable Norio Wakamoto. He dwells in a big, freaky castle and makes the lives of the common folk miserable with his armies of animal-men, as well as through the deployment of hideous unique monsters known as Mouki. Miroku is basically Dracula. He looks like Dracula. He acts like Dracula. He feeds on the spiritual energy of his children, robbing them of their chakras to sustain his own demonic existence. One of these children is Madara, born with a mark of prophecy—a dragon-crest on his forehead—blah blah blah destined to overthrow his father blah blah secret identity blah peaceful village yadda yadda evil army yadda senseless slaughter, vow of vengeance, hidden power, various companions to help in his quest, etc. etc. It’s a pattern we’ve seen in countless fantasy novels and innumerable video games, a heroic tale where the children of the big evil bad guys rise up to oppose the tyranny of their parents in the name of truth, justice, and general all-around warm, fluffy feelings of goodness and hope.

So what makes Madara unique? What elevates it to a higher plane of animated entertainment, a plateau of almost Harmagedon-like proportions? 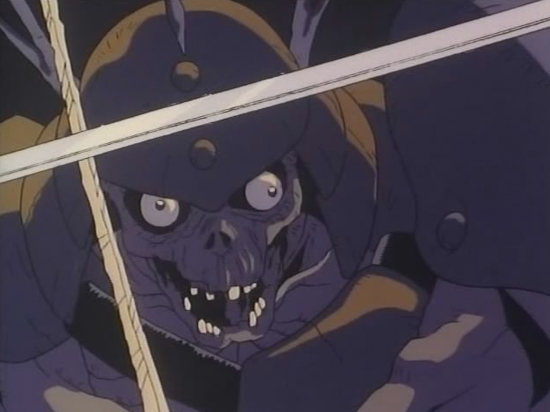 Unlike the typical wizards-and-elves high fantasy setting, Madara combines a dash of Eastern mysticism with elements that could have been lifted from a work of cyberpunk science fiction. A central conceit in this story is the existence of “gimmicks”: prosthetic limb replacements powered by magic rather than technology. The titular character and requisite rowdy teenage protagonist, Madara, is effectively a full-body cyborg with a chassis designed for combat. It’s like dropping the Six Million Dollar Man or Major Motoko Kusanagi into the Lord of the Rings. One moment it’s typical high fantasy stuff, with swords and arrows and an army of wolf-men on the prowl, and then suddenly – BAM! Rocket punch! Shoulder missiles! What the heck did I just watch?

Also noteworthy are the monster designs by Junichi Watanabe, who also designed ghoulish creatures for such anime as Peacock King: Spirit Warrior and Yotoden: Wrath of the Ninja. While some of the monsters are the fairly typical werewolves and undead minions you’d expect from a fantasy setting, the named enemies—the Mouki lieutenants dispatched by Miroku to kill Madara— are all quite bizarre, with lashing tentacles and slobbering, fanged-fill maws and other chimerical appendages sprouting from unlikely places. I’ve always been an enthusiast for unusual beasts, but seeing these strange designs in action is only part of the fun. The other part is seeing all of these monsters—from the lowliest skeletal foot soldier to the loftiest mini-boss—get steamrolled by the heroes. These OVAs are loaded with gratuitous beheadings and bisections, the vast majority of which are directed at the inhuman members of the cast. I haven’t seen this level of hilarious henchman slaughter since Garaga. 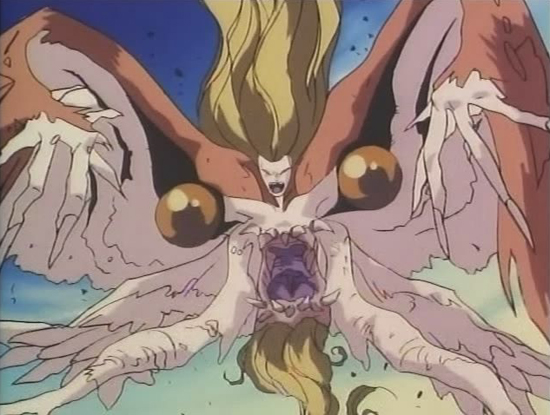 Did I mention that the female lead, Kirin, commands a pair of majin – legendary guardian statues that for all intents and purposes are giant robots? Yes, there are giant robots in this anime. Also, Noah’s Ark makes an appearance, although I don’t remember any scripture stating that this particular vessel was a.) a flying ship and b.) shaped like a sperm whale / louse hybrid and c.) piloted by a little bearded gnome with a trio of trained monkeys perched on his head and shoulders. Also, Miroku / Dracula in his final form spits lasers. No explanation. That’s just the way Madara rolls. 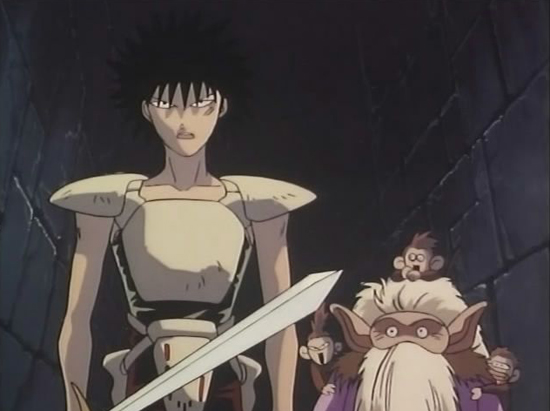 Yes, Madara is the sort of joyously deranged anime that came out of the Japanese bubble economy of the late Eighties and early Nineties. For better or for worse, they don’t make them like this any more: thoroughly average in so many respects, yet tremendously entertaining by dint of the wild creativity that pokes through in places. It’s just the sort of thing to curl up with on a gloomy afternoon, when the thunder roils and the lightning splits the sky, when outside the storm rages but inside the castle is quiet because all of the minions have been sent out to pillage the countryside in a campaign of terror and bloodshed that will be remembered for a thousand years!

Er, I mean, to enjoy with a soothing tropical drink because the weather’s too rainy to go to the beach.

I’m not an evil overlord.