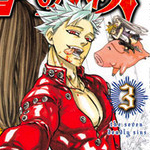 The Seven Deadly Sins anime, based on the manga by Nakaba Suzuki, is being teased again in another brief commercial. This one highlights one of the notorious Seven Deadly Sins knights, Ban, also known as the Sin of Greed.

Tatsuhisa Suzuki joins the cast as the voice of Ban, acting alongside Yuuki Kaji as Meliodas, Sora Amamiya as Elizabeth, Misaki Kuno as Hawk, and Aoi Yūki as Diane. Tensai Okamura (Blue Exorcist) is directing the series, with Shotaro Suga (Ghost in the Shell: Stand Alone Complex) on series composition for the A-1 Pictures (Sword Art Online) production.

See the latest 15-second spot below.