The Seven Deadly Sins Anime Gets a Brief Ad 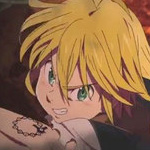 The anime adaptation of Nakaba Suzuki’s shonen fantasy adventure The Seven Deadly Sins is set to premiere in Japan this October, airing Sundays at 5pm on MBS/TBS. While we still have a bit of a wait ahead of us, Aniplex posted a brief ad for the series on YouTube, and you can see the non-region-locked version below.