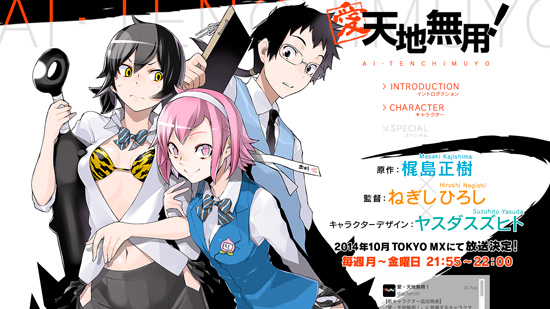 Everything old is new again.

Lately quite a few series that had American anime fans enthralled in the 1990s are back in one way or another. Take Dragon Ball Z Kai, for example, the condensed version of the original DBZ series, or the new Sailor Moon series, a reboot of the 90s original.

The latest return to the 90s comes in the form of Ai Tenchi Muyo, a recently-announced series featuring the further adventures of Tenchi Masaki and his intergalactic harem. Ai Tenchi Muyo, which involves Tenchi teaching in an all-girls’ school, will use an unconventional, five-minute episode format and will run 50 episodes on Tokyo MX starting in October.

The original Tenchi Muyo, fans as old as I am will recall, was a six-part original video series produced by AIC in the early 90s. The story of a hapless teenager who somehow becomes the subject of an alien love triangle, Tenchi Muyo was by no means the first, but certainly exemplified, the burgeoning “harem” genre. The series was a hit, and spawned multiple spinoffs, TV series and movies.

Though the franchise has never really gone away (the most recent spinoff series, War on Geminar, ran in 2010), the titular Tenchi himself hasn’t made an appearance in almost a decade.

A recent update to the official site revealed several of the new characters names and designs by character designer Suzuhito Yasuda, who’s definitely given the series a different look than its 90s predecessors.