Anime Busience, a Japanese magazine that covers the business and science behind the anime industry, has published a fascinating graph showing the difference in taste among Japanese and American anime viewers.

The graph, created with viewership stats from Japan’s Niconico and America’s Crunchyroll, shows series popular in Japan in purple, America in orange, and a thin strip of shows popular in both countries in yellow. 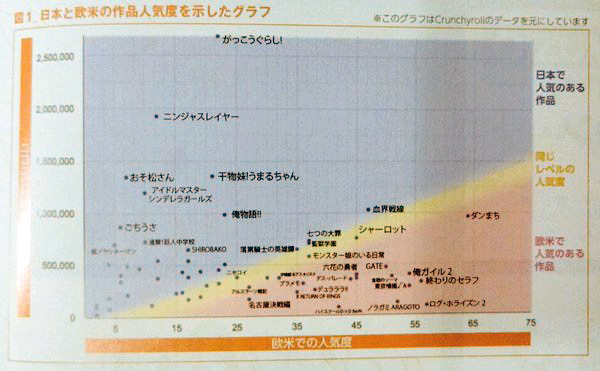 On the extreme Japan side of things are School Live! and Ninja Slayer the Animation, while a bit closer to the line are series like Mr. Osomatsu, The Idolmaster: Cinderella Girls and My Love Story!!.

Anime series that proved more popular Stateside than in their native country included Log Horizon, Noragami Aragoto, Seraph of the End and Is It Wrong to Try to Pick Up Girls in a Dungeon?.

Finally, series that did well among both Japanese and American viewers included Nisekoi, Charlotte and Monster Musume.

Is your taste in line with these results, or are you Japanese in mind and spirit? Did anything surprise you?