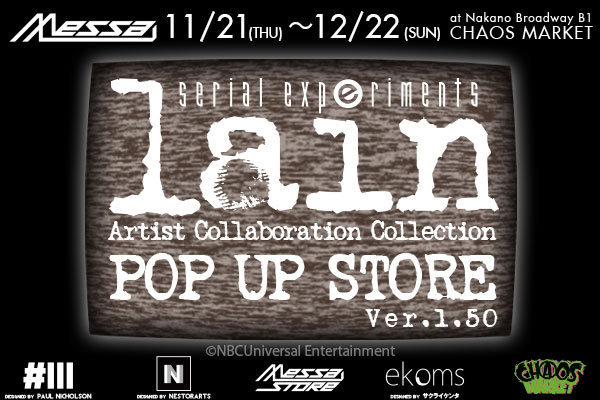 As if there weren’t enough reasons to visit otaku mecca Nakano Broadway.

From November 21 to December 22, the mysterious and wonderful mall in Tokyo will become home to a pop-up store devoted to Serial Experiments Lain, the cyberpunk series from 1998 that we like very much.

The shop will feature apparel and other limited merchandise from a number of brands and designers like MESSA, Nestorarts and ekoms.

The store is also giving away 10 items signed by the cast and staff of Lain. For a chance to win, follow Messa Store on social media then tag a Lain-related photo with #lainpopup1_50. It’s unclear whether they’ll ship abroad, but it’s worth a try!

The existence of the pop-up store may be related to the fact that Lain went “open-source” for fan projects earlier this year.

Lain Iwakura appears to be an ordinary girl with almost no experience with computers. Yet the sudden suicide of a schoolmate and a number of strange occurrences conspire to pull Lain into the world of the Wired, where she gradually learns that nothing is what it seems to be… not even Lain herself. 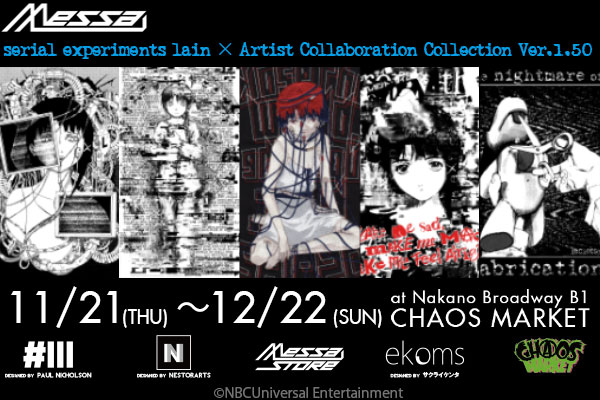 View all posts by Matt Schley
It Director Talks Hollywood Attack on Titan, Macross Productions
What Do An Anime Staffer’s Work Hours Really Look Like?