Riichi Mahjong, Anime, and You 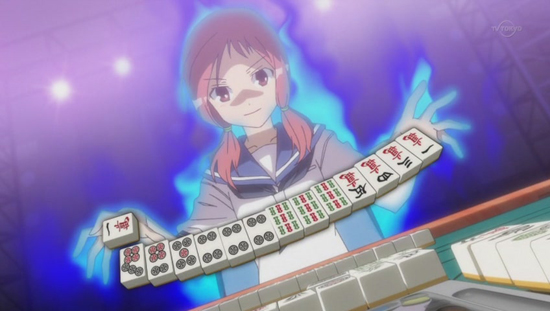 Not to say it’s exactly all the rage with the kids these days (Hetalia’s over that way), but in the last couple years Japanese (or riichi, or reach) mahjong has become a very small trend in the Western otaku culture. If you’ve watched Nobuyuki Fukumoto’s Akagi psychologically dismantle a man or the girls of Saki quiver and make eyes at each other at the mahjong table, you might have gotten curious about the game they were playing.

It’s fascinating, after all. Even if you’re not entirely sure what’s happening as you watch, the tension of the game creeps inevitably up the players’ throats as the game progresses, slipping them before they realize it into a cutthroat battle where a single wrong move means death. You might have thought “I’d like to play that!” after watching one of these anime, but mahjong is tough and the Japanese variant is particularly complicated. 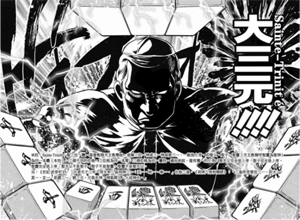 This is where my buddy Carl Li (“Ogiue Maniax“, or “that Ogiue guy”) and I come in. Through sheer force of will, Carl and I banged our heads against the rules and achieved basic competency. But in the past I had tried and failed, and we knew that certainly some anime/manga fans (Akagi is directly responsible for most of my regular play group at the USPML) had done the same. So we figured the best way to help out– and hopefully hook more people on the game as badly as we are already hooked– would be to run a panel about it at Otakon.

While actually teaching mahjong in an hour is a hopeless endeavor, Carl’s idea was to create a hyper-compressed guide that covered the barest basics while relating some of these things to scenes from mahjong anime. The primary goal was to enhance people’s appreciation of mahjong anime/manga by helping them understand it: the secondary goal was to nudge them  gently towards actually playing the game. We find that the anime tends to be a good enough motivation for most people.

Online and off, Carl and I labored to create a presentation that had to explain some very complicated points in far less time than they warrant, while maintaining a sense of humor and the anime connection throughout. This was a tall damn order. 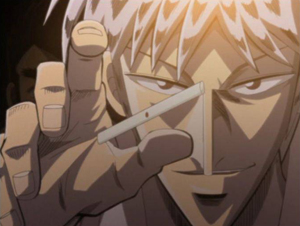 As we stared out from our stage into the vast expanse of what actually turned out to be Otakon’s smallest panel room, Carl and I were a little worried about exactly how this thing was going to turn out. We were scheduled at 9:30 AM on Friday morning, when most attendees were still just getting into the con. Before the panel, we fully expected to be giving our presentation to perhaps ten or fifteen of our friends.

And then we packed the room. People were a lot more interested in the game than we’d expected! A few people were even standing by the walls. The presentation– peppered with clips from as many mahjong anime as we could find ranging from the popular titles to relative obscurities like Legendary Gambler Tetsuya and Naki no Ryu— went more smoothly than in any of our rehearsals, and crowd reaction was great. We had a healthy Q&A session once we were finished. At the end, we gave out a “further reading” post from my blog designed to help get beginning players on their feet in this deadly game of chicken.

As a first-time panelist at Otakon, nothing could make me happier than such a good turnout and such an enthusiastic crowd. I’d like to thank everybody who came to the panel and apologize to the guys who invited us to a hotel room deathmatch that night: we were kinda busy.

If Akagi’s nihilistic badass got a lot of people into riichi, and Saki’s schoolgirls did it some more, perhaps what Japanese mahjong really needs is a Hetalia of its own. Or maybe I should just write “BISHIE MAHJONG” on a bunch of Akagi paperbacks with a sharpie and start passing them out at conventions. We’ll make this game big yet!