Welcome to the Space Show 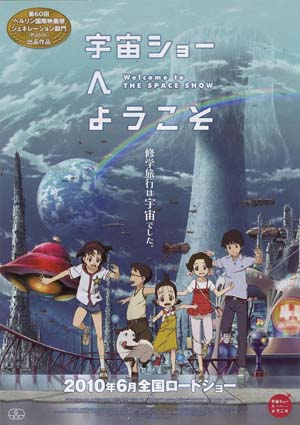 At the start of the Otakon showing of Welcome to the Space Show, the Aniplex representative told us to come to the panel after the movie and tell the staff how much we loved it. Normally I’d call this hubris, but after watching the trailer online I came into this movie fully expecting something I would go rave about afterwards. As things turned out, it was hubris after all. The film is a like, not a love.

The premise is that a small pack of elementary schoolers, left alone in a cabin on a summer weekend, save the life of an alien who takes them on a vacation to the Moon as a reward. Matters get complicated, of course, and the kids end up on a galaxy-spanning adventure as they race to get back to Earth before their parents find out what they’ve been up to.

It’s definitely a kids’ movie (the only human beings who appear for any length of time, after all, are children) but every so often the sense of humor aims a bit older: things like the alien dog college professor who lives with his parents, and wasabi being treated like heroin.

The creators have all kinds of fun little ideas like these and they let it all loose on the screen: aside from the dog-people, no two aliens the kids meet appear to be of the same species. The alien technology and entertainment  (Masaki Yuasa makes a cameo with the surreal opening of an alien TV show) on display in the film is perhaps beyond human imagination. These guys never fail to pull out one fascinating piece of the universe after the next. It often feels like what you’re watching isn’t so much a movie as a procession of animators’ brilliant ideas loosely themed around space and aliens.  For the first half of the movie, I barely noticed time go by at all as I marveled at new delights every other second.

The film clocks in at nearly two and a half hours, and the animation never runs out of steam. Unfortunately, I can’t say the same for the script. The movie gets so caught up in the animators’ ideas that it’s only by the last half-hour that it realizes it’s completely forgotten to flesh out its characters and seriously get down to the 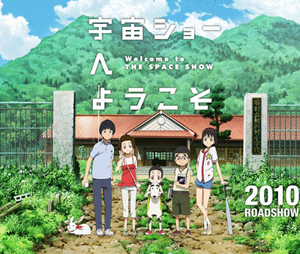 business of telling its story. Given the unusually long running time, there’s just no excuse for this. Either the characters are potentially interesting but are never taken far enough (the dog, and the people of the Space Show), or they’re one-notes with no impact whatsoever on the film. There are five kids in this movie, but there could have just as easily been two: I didn’t feel attached to any of them.

The story of the kids and the story of the aliens (and the titular Space Show) seem almost unrelated as the movie runs like mad between them, and neither story is developed enough to give it any weight or tension. About three quarters of the way in, the film is suddenly conscious that it’s spent too much time on visual delights without moving things forward the way it should have been. It solves this problem the way it’s been doing things for the last two hours: it throws everything at the viewer it can. It also tries to stop, get teary-eyed, and choke out “No, seriously, guys, be excellent to each other,” but by this point it’s much too late for that.

The resulting finale, while spectacular to look at, just doesn’t earn the emotional climax it was so clearly gunning for. There were a number of points where, as I stared at a phenomenal display of animation talent on the screen, I found myself simultaneously thinking “this is astonishing” and “I hope this movie ends soon.” As the big sister made a tearful apology to her kidnapped little sister while Giant Swinging an alien—a scene which should, by all rights, be fantastic in every sense—I couldn’t feel a thing. 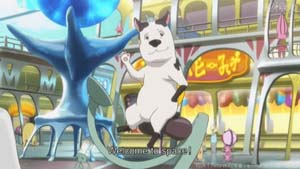 On a strictly visual level, Space Show is a beautiful film that I would recommend heartily to anyone who’s ever loved animation, but it’s in desperate need of some tightening up. Two and a half hours is a long time, especially for a kids’ movie, and Space Show often feels too densely stuffed and self-indulgent.

In one hell of a meta-surprise ending, the entire population of the convention was evacuated from the building as the credits rolled (Was it a basement fire? A kid pulling the fire alarm? Nobody seems to be telling!) and I never did make it to the after-showing panel with the creators. I’d have wanted them to keep doing what they’re doing, really: this level of visual imagination and the resources and talent required to put that on screen are so rare in a field that is, in literal and figurative senses, closer to bankruptcy every day. I just hope they get an editor for the next one.