Power Is For The Weak 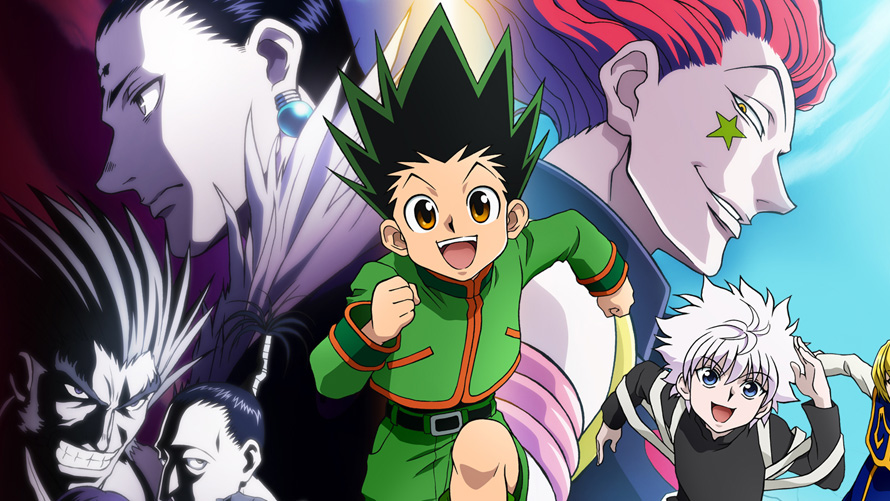 Yoshihiro Togashi, the creator of YuYu Hakusho and Hunter x Hunter, is obsessed with power. It’s an unsurprising fascination for the author of escapist fantasies that center on young boys of remarkable martial prowess, even less so for an author who has built a career writing stories that slot so comfortably into their genre that all but an informed seasoned viewer might mistake them for generica at first glance. Not that Togashi could deny it: Hakusho and Hunter both display their influences proudly.

Each pulls without shame from the pool of tropes and clichés introduced by classic tournament fighters such as Dragon Ball Z and Saint Seiya and made more familiar by later series like Rurouni Kenshin and Bleach; both follow a group of superpowered boys fighting arc after arc against a colorful crew of perpetually more nefarious and powerful villains; battles are predominantly one-on-one, staggered affairs in the style of tournaments that allow characters time enough to show off their gimmicky powers; it is not rare for the hero to unlock some new form that symbolizes a major leap in power at the heightof an incredibly taxing battle. At times these influences are so apparent that Togashi’s stories even feel more like a blatant rip-off or good-mannered parody than they do an evolution of the formula: YuYu Hakusho’s Four Beast arc, with its emphasis on a cast of villains whose personally tailored chambers are connected by seemingly infinite stairs spiraling ever upward, so obviously apes Saint Seiya that one might expect Yusuke and the gang to pass Seiya and his crew on their way up the next flight. 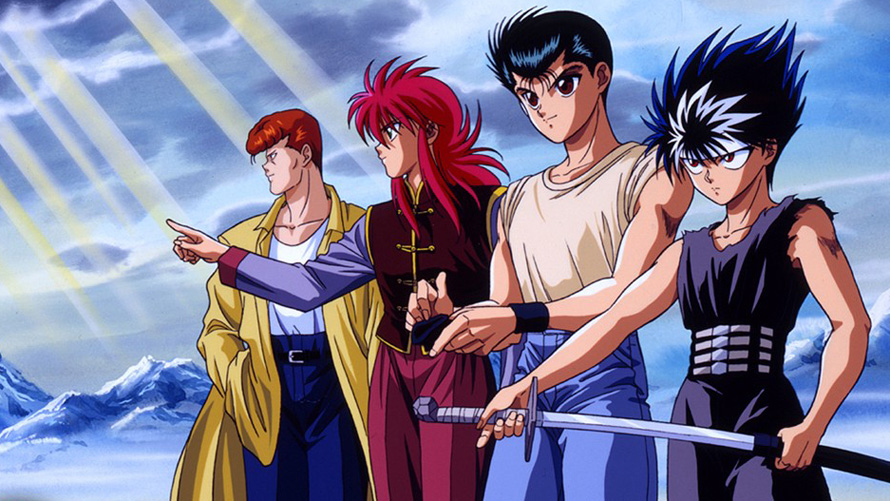 But where Togashi’s predecessors, his peers, and his progeny insist on concluding their stories on swelling notes of triumph, Togashi himself seems always to want to sound a note more hollow. Not that he’s ever so bleak a writer as, say, Yoshiyuki Tomino. Like most other shonen authors he also seems constitutionally incapable of leaving any of his heroes dead for more than pages at a time; resurrection, no matter how improbable, seems always just around the corner for any fallen hero. And yet something about their victories always feels subtly wrong. Even the aforementioned moments of transformation, which elsewhere seem engineered to give viewers the greatest sense of catharsis, feel wrong in his hands.

There’s nothing somber about the scene where Goku finally ascends to the much-foreshadowed legendary level of Super Saiyan and begins to pay back Freeza’s cold-blooded murder of Kuririn, nor any sense that there should be; when Seiya’s paltry bronze Cloth ascends to the level of a Divine Cloth and he swats aside the formerly invincible Thanatos and Hypnos, the mood is one of elation. Even in those instances where the transformation seems to go wrong—as when Naruto loses control over the nine-tailed fox in his battle with Pain—any unease is quickly overwhelmed by the joy of seeing the villain given brutal comeuppance. Victory in all these scenarios is unambiguous, celebratory. 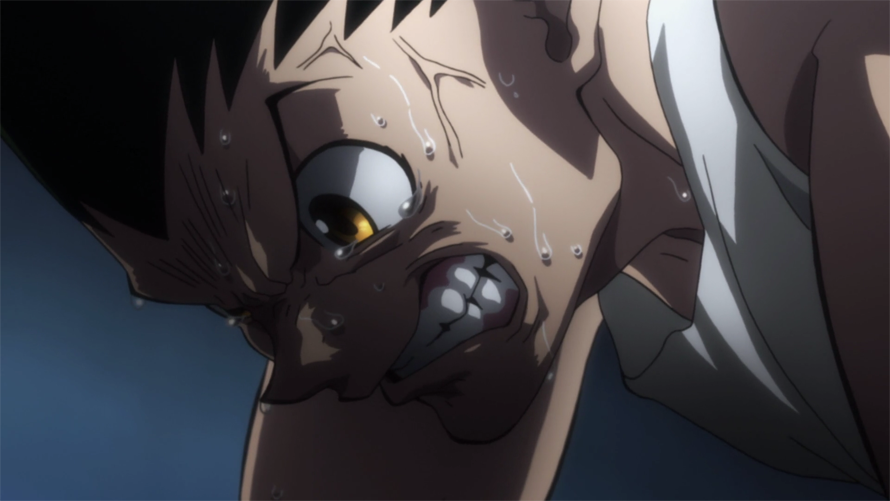 By contrast, an air of melancholy pervades nearly all such scenes in Togashi’s stories. As Gon transforms in his battle with Pitou, one is more apt to react with horror or disgust than joy. While the progression of their conflict is natural by any rule of shonen structure, it feels utterly wrong. Pitou was presented initially as a monster, yes, and her playful evisceration of Gon’s mentor Kite was rightly presented as a horror show, but in the intervening episodes viewers have also seen her develop into a nurturing, protective proxy mother to Kamugi, the one pure soul in Hunter x Hunter’s utterly depraved world. Gon’s transformation, by contrast, is nothing noble or inspiring, but instead seems grotesque and twisted, a perfect reflection of his own childish conflating of power and maturity.

And when Yusuke’s demonic heritage awakens and allows him to demolish the previously invincible Sensui, there is no rejoicing in the latter’s death, nor any sense that the former’s miraculous transformation is some blessing. Sensui’s last words reveal that his true intention for opening the portal to the demon world was that he might be allowed to die there in atonement for the sins he committed against demonkind rather than waste away from an inoperable tumor; the heroes have only been giving him exactly what he wanted, and to what end? The demon Itsuki’s demand that Yusuke and company leave him with Sensui’s corpse and soul while they “go … find another enemy in (their) eternal struggle” would sound like the lashing out from a bitter enemy in so many other examples of the genre, but in Togashi’s story it stings with subtle truth.

Suddenly, the endless and ever escalating nature of these conflicts starts to feel not only futile but foolish, a fact made painfully apparent in YuYu Hakusho’s next and final story arc. For the previous three our heroes had spent their time desperately trying to gain power enough to deal with demons classified by the series’ power scale as B+ and A. With the final, bit players like Chu and Link and dozens of others—fighters whom earlier villains such as Sensui and Toguro could have obliterated with a sneeze—gain levels of power measured tens of thousands of times greater than those these villains and our heroes sacrificed life, friends, and family for through nothing but intense workout sessions. If it seems to trivialize the tragedy of Toguro’s story, and if the later knowledge that the portal Yusuke and company sacrificed life and limb to prevent opening could be closed easily enough by a group of mystics, that seems less and less a matter of poor plotting on Togashi’s part than a deliberate attempt to showcase just how absurd the shonen tournament fighter’s obsession with power and escalation is.

Other authors pay lip service to this idea, yes, arguing they aren’t so facile as all that, but they protest too much. If, in Rurouni Kenshin, Kenshin chides Yahiko for adopting the former assassin Shishio’s own philosophy that might makes right when his protegé decides their victory was a consequence of their being righteous, he is also chiding the reader for expecting that their conflict would be settled through martial prowess. But why should they, when shonen series—tournament fighters especially—are engineered to train the reader into conflating morality and power? The heroes will always save the day because that is the way these stories are structured, but because these series’ emphasize the spectacle of combat above all else, they must constantly introduce ever more menacing villains and so the hero must always reach greater peaks of power and undergo ever more drastic transformations to present this. Power is presented in aspirational terms; the characters we walk away admiring—the characters who will always stick best in memory—are the most powerful characters who, as it happens by little accident, are often also the characters who walk away the victors at story’s end.

Togashi, by contrast, has no such fond illusions about power. His characters may not be so astute—Gon and Yusuke both constantly confuse power with maturity, which is why they pay time and time again and only truly grow when, respectively, one loses his powers and the other abandons a life of endless combat for a mundane romance—but the construction of his stories suggests he’s far more aware than they are. It’s not that he views power as evil, necessarily: if there is one thing he disdains again and again it is simple moralizing, and that holds true for the simple maxim about “absolute power corrupting absolutely.” He is, after all, the author who confessed in the forward to Hakusho’s ninth volume that of his characters it is “bad guys—all of them combined” that he resembles most. Yet that does not mean he’s so lazy as to conflate might with right, either. Rather, what he wants to insist is that power carries with it consequence, and so it always affects change; unlike in other series, where the realization of power also brings with it victory and an attendant catharsis, in Togashi’s work it only breeds that familiar empty ambiguity that marks so many of his endings. 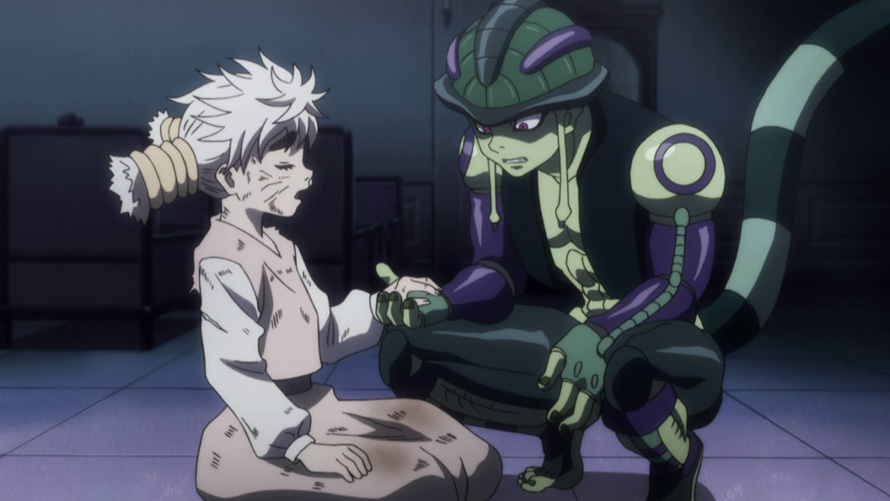 Consider how Meruem, king of the Chimera Ants, grows beyond his juvenile, tyrannical obsession with power to arrive at enlightenment only after he is bombed into ash, and how the same bomb that allowed him to reach enlightenment is the one that poisons him, preventing him from ever bringing his newfound wisdom to a world in desperate need of it. Left alone he would have ruined the world, transformed he might have lived up to his own boast that he was the apex of all life, yet circumstances ensured that the catalyst for his awakening would also be the very thing that ended him. Netero’s last words (“You know nothing of the bottomless malice in the human heart!”) are no mere curse to send Meruem off but a statement of truth that hits at one of the core philosophical points Togashi is obsessed with. For humans never would have developed the Little Rose so instrumental to defeating Meruem if they’d been as communally minded and as physically powerful as the Chimera Ants: it is precisely because they are weak individually and in constant conflict with one another that they had to develop the same power that would simultaneously give birth to and destroy the grandest being to ever live.

Perhaps this is why Togashi’s works slip so easily into a horror mode. The world they present us is broken, a horror all its own: the greatest goods only result from the greatest evils, and even then are only fleeting. A satisfying victory is impossible; everything is an “eternal struggle.” Ultimate power is impossible, and even if it wasn’t, it would still solve nothing. Power is no tool that can shore up this fractured existence, at least not permanently, because anything created through force is permanently marred by dent of its origins. In time it will fall apart. 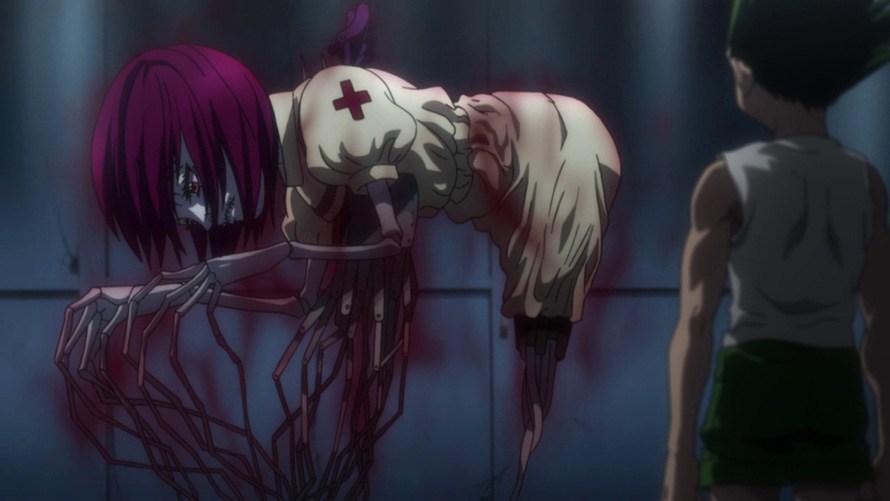 It may seem puzzling, then, that Meruem later says if given the choice he would gladly reincarnate as a human (an assertion that inverts Sensui’s own final plea to be reborn a demon in YuYu Hakusho), especially considering the montage of human-made atrocities that Togashi trots out just minutes before this declaration. But his saying that is no affirmation of humanity’s moral standing so much as an open admiration for their capacity for conflict. Weak as they are, competitive as they are, they must constantly change: unlike the Chimera Ants they suffer from no illusion that they will ever reach some apex. In accepting this he acknowledges, finally, that his own obsession with power was as foolish as any other delusion. He’s come to learn exactly what so many other of Togashi’s protagonists have discovered and what Togashi himself would have his viewers and readers learn: the stories peddled by so many of his contemporaries are lies. Power isn’t true strength; power is for the weak.

Hunter x Hunter is available on home video from Viz Media and is streaming on a variety of services. You can stream YuYu Hakusho on Funimation’s site and grab it on Blu-ray and DVD.