These were my personal goals for Otakon 2010:

• Record a group podcast – Accomplished! (I’ll have it online eventually.)

• Interview Felipe Smith for my podcast and/or this website – Failed!

I put in a formal request through the convention for my interviews, and this year I followed up on my requests, but I still failed. I couldn’t seem to catch Felipe Smith at the Vertical booth, and I never heard anything about Sinterniklaas. I also failed to go to his panels. Usually I just run into him. For god’s sake, I ran into him at Tokyo Anime Fair. 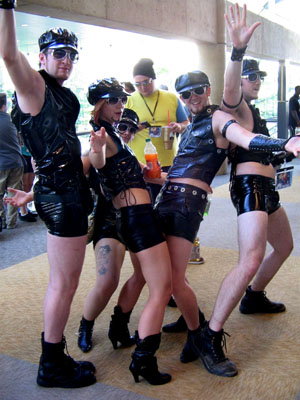 I also failed to attend the Yoshida Brothers concert. I heard it was absolutely amazing. Due to my own bad planning, I scheduled my podcast meet-up to occur about 45 minutes before the show, when sane people were waiting in line already. Fortunately, the meet-up was a huge success. I brought PB&J sandwiches and we had a picnic outside the mall food court on the balcony. Everyone I knew at the con (except academic Alex Leavitt and manga critic Ed Sizemore) showed up and hung out for a surprising number of hours. A few friends left to go see the concert and returned, saying it was packed and that press were not getting any special priority to get in.

On Saturday, I failed to see “The Top Ten Funniest AMVs of All Time.” Instead, I went to breakfast with my hotel roommates. In an attempt to avoid The Breakfast Apocalypse of 2006, we sought out the best breakfast in Baltimore in advance.  The Internets recommended Brightons,  which turned out to be on the mezzanine of the Harbor Court hotel. By New York City standards, the brunch there was very reasonably priced for such a  high level of service and super-fancy-pants décor.  (Gothic Lolitas take note! Brightons serves high tea if you make a reservation.)

By the time I got to the Funniest AMV panel, with maybe 15 minutes to go, it was long since over. My first clue was an enormous crowd going the other way. Bystanders said it was so crowded I couldn’t have gotten in late anyway. I heard reports of many other panels that were similarly disastrously popular.  That sort of thing happens every year at Otakon, but this year seemed a little worse. It’s hard to say if it was because this was the biggest Otakon ever, with 29,274 people (including dealers, attendees, and guests), or if it was because guests like “pop culture diplomat” Takamasa Sakurai gave presentations to near-empty rooms, while popular fan panels got smaller rooms or straight up wait listed (like my panels). 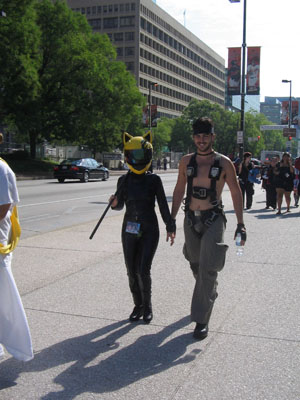 Leading up to the con, panel applicants received email from Aaron Clark, the Panels Department Head. “We got a whopping 300 submissions, which is way up from about 220 last year,” Clark said in one email. A later message read: “… as it turns out, despite a dramatic increase in panels submissions, we’ve actually had a decrease in fan panels this year due to the volume of guests we’ll be having this year.”

Even the addition of more panel rooms in the Hyatt didn’t seem to be enough to stem the flood of panels. I found myself waiting in a tremendously long, dizzying line for the AMV contest, AMV Hell, and Welcome to the Space Show. The enormity of the convention center and the length of lines makes Otakon feel a little more like San Diego Comic Con each year.

I sat in on a bit of Sakurai’s panel. He was going through a slideshow of anime conventions he’d attended around the world. “Check out these One Piece cosplayers playing shogi,” he said  (not his exact words), “That photo was taken in Spain!” Mr. Sakurai said, expecting the audience to be surprised.  Instead, those left in the room were yawning. The vast majority of Otakon attendees are well aware of the worldwide popularity of anime, thanks to youtube videos like this one like this one.

Saturday afternoon’s fire alarm and evacuation has been well-reported elsewhere (including by me), and especially on Twitter. Everyone filed out in an orderly way just after Welcome to the Space Show. Most people took the chance to eat lunch. 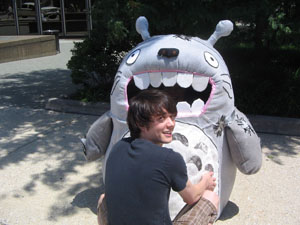 Every year I forget that Otakon is so enormous, it’s like several small conventions going on within a larger one. The LARPers are not there for the same con as the break dancers practicing in the Sharp Street Lobby.

You could spend all of Otakon in the videogame room alone, which is as large as a dealer’s room at a mid-size con. It hosts games from all eras and platforms, anime-related or not. For example, I played Typing of the Dead on Dreamcast against Otaku USA magazine contributor David Riley. It was my first time in my eight Otakons to actually play a videogame, and my first time to play Typing of the Dead (I lost spectacularly).

One could go to Otakon for just the raves, or just for concerts. I ran into my Goth Loli friend for only 20 minutes on Sunday. Her fashion line was featured in a fashion show held at the Arena. Fashion industry guest h.Naoto looked at her designs! This was h.Naoto’s first time in America, and when asked what else he planned to do, he said excitedly, “I’m going to Hooters!” 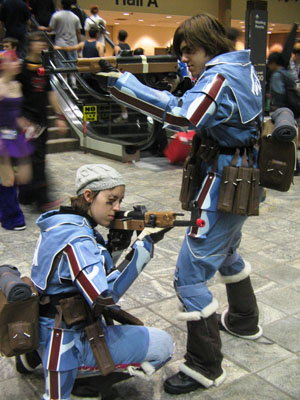 While h.Naoto presumably ate sub-par buffalo wings, those of us in the Vertical Inc. rental car (including new Otaku USA contributor David Cabrera) ate at Chaps Charcoal Restaurant, a 20-minute drive from the city center to a magical intersection with everything a man might need in life; a check cashing place, a liquor store, an adult video rental shop, a strip club, and pit beef BBQ. The meat was delicious, and well worth the weekend’s last long line.

I really felt like something was missing from Otakon this year. It only took me until Saturday night to realize that Mike Dent (host of Friday Ace) was missing! It really wasn’t Otakon without him. In fact, this entire report and any other reports you happen to read are probably the result of an illusory spell. At our room party on Saturday I even said “I disbelieve!” but I must’ve failed my saving throw. Sorry, Mike.