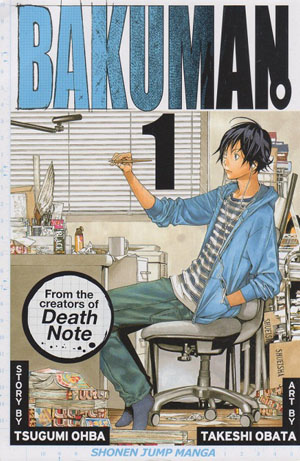 Writer and artist duo Tsugumi Ohba and Takeshi Obata have an especially tough act to follow, a trap set by their past selves to cast a shadow on all subsequent endeavors. Death Note‘s presence still looms menacingly, but their latest series, Bakuman, takes things in an entirely different direction. It’s not some high concept fantastical game of cat and mouse; rather, it’s a more grounded tale of youthful determination on the path toward taking the manga world by storm.

Moritaka Mashiro is a middle school student with an exceptional talent for drawing. Despite both his artistic inclinations and his late uncle’s stint as a semi-popular gag manga creator, he’s spent most of his time concentrating on his studies and bracing himself for a somewhat dull future in the executive world. Things change, however, when he starts hanging out with classmate Akito Takagi, who pleads a convincing case for the two teaming up as a writer and artist duo primed to invade publishers with their inimitable talent.
Whatever reluctance Moritaka is saddled with disappears when he finds out his classmate crush, Azuki, has her own dream of becoming a voice actress. Thus the deal is sealed: Moritaka and Akito will become famous mangaka and get their series adapted into an anime for Azuki to star in, and love is promised to bloom as a result.
As pie in the sky as the premise is—from the pair’s lofty aspirations of launching a popular series in Shonen Jump to the rose-petal-perfect fated romance between Moritaka and Azuki—Bakuman still strives to balance the difficulty of making it with all the lucky breaks that occur. Not many people, if any, will be faced with a situation as ideal as that of our aspiring creators, after all. The death of Moritaka’s uncle, for instance, provides the duo with a vacant workspace complete with countless manga reference material, as well as the old storyboards and final drafts used to create his hit gag manga, Superhero Legend.
Those that don’t succeed in making a major splash with their series are forever considered “gamblers,” and that’s precisely what our heroes will be until they can prove themselves on the manga circuit. That means sacrificing sleep, studies, and any hint of a social life beyond what the two of them have together. As explicit as Bakuman is about the relentless hardships of making it as a mangaka, there’s also a distinct glimmer of hope in there. Despite the reality of the business being on full display, it’s not loaded down with hopeless cynicism. Rather, each obstacle is met with the gritting of teeth and the determination necessary to leap that particular hurdle and move on to the next.

Takeshi Obata’s art style remains something very special. Like with Death Note, the facial expressions and animated poses really stand out, giving their characters more life than your average comic delivers. Combined with his detailed background work and breezy panel layout, it’s a wonder Bakuman‘s pages never seem too cluttered when Ohba’s often wordy (both in terms of internal and external voices) script comes into the mix.

If simply seeing the latest work from Ohba and Obata has you longing for days and nights spent with Light and L, don’t worry, there are plenty of explicit references to Death Note in these pages. They’re mostly names dropped in time with mention of other popular series that have made it big, but they certainly don’t mind bringing up their smash hit from time to time. Bakuman may be a different beast entirely, but the pair’s talent when combined is on prime display, and of particular interest given the close-to-home subject matter.

At nine volumes so far, the series is still ongoing in the pages of Weekly Shonen Jump in Japan, with a TV anime scheduled for the Fall 2010 season on the NHK-Educational channel. With the way the first volume comes to a conclusion, I’m certainly invested enough to see where Bakuman takes us next.