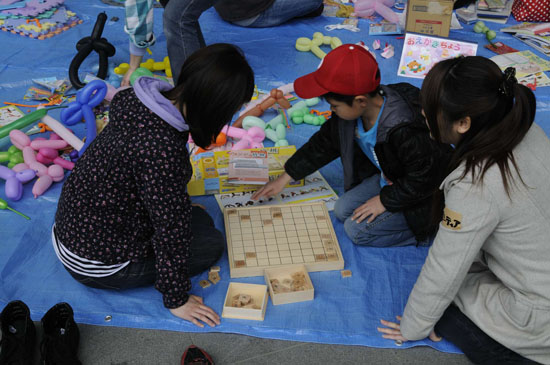 I’m just a guy who writes nice fluffy articles about cartoons. In talking about cartoons, you don’t expect to be involved in hard news like historical natural disasters. Oh sure, certain sites in town are labeled with bilingual notices clearly stating where the evacuation zones are, and frequent training is given should disaster strike, but, as with driving a car or drinking from someone else’s cup, the mind cheerfully blocks it out in favor of getting on with the day. 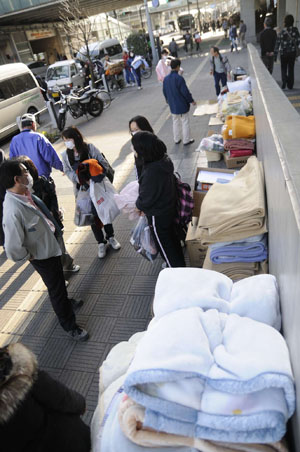 Which makes the impact all the more scary. I’ll spare you all the details of what happened when the magnitude 9.0 hit because what it comes down to is that the experience my quiet Saitama town went through doesn’t compare at all to what those further up north experienced. On the Japanese seismic scale, the quake was the maximum possible of 7.0, whereas our town and Tokyo got off with a much milder 5, which is still pretty damn scary but at least you’re still capable of standing on your feet and the worst most had to worry about in the aftermath were some delayed trains and cracked china. The initial fright was soon replaced with nervous laughter.

That nervous laughter was soon to be replaced with quiet shock in the following minutes upon seeing the city of Sendai get flooded before millions of very frightened viewers. With the current figures of over 9,000 dead with over 12,000 still unaccounted for, the tremendous damage done to the prefectures in the north and the bitter nights that have followed for the survivors has made this writer at least stop whining about why Madoka Magica didn’t air this week.

Yet, much as Dear Leader Patrick Macias so eloquently stated, life goes on in the southern part of Kanto. In fact, it went on just too easily for the first weekend. After the initial delays, trains started to run again and stop on the same dimes they used to as if nothing had happened. It seemed as if life was getting back to a semblance of normality. 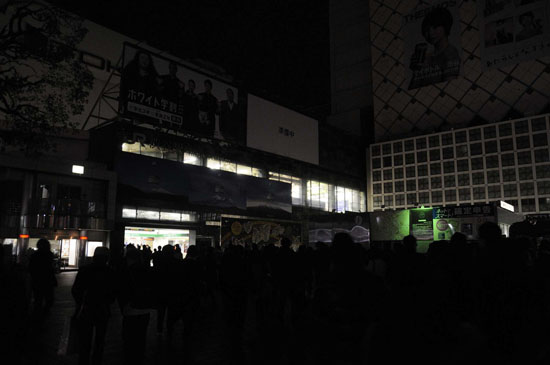 Yet, all one has to do is turn on the TV and see that while, yes, daytime TV still has cheesy dramas and primetime is filled with melodramatic re-enactments of events half a world away, there is a pesky blue bar running across the borders, reminding us to stay alert. Cities outside of Tokyo are also now subject to planned power outages which would be less infuriating if they were at least consistent in their application. But I digress.

Now, Tokyo can only be described as two-faced. On one, it is still unmistakably a bustling metropolis, yet on the other, walking into shops can sometimes feel like a bit of a ghost town. Shibuya streets are flooded with people on one corner and completely desolate on the other; I think I saw the actual streets of Takeshita Street in the daytime for the first time I can remember; Akihabara still has tourists a plenty walking about despite the increase in shuttered shops. Even though streets are dimmer than before, life goes on and the worst is over, yet there is the perpetual reminder to stay alert, nevermind the unceasing aftershocks. 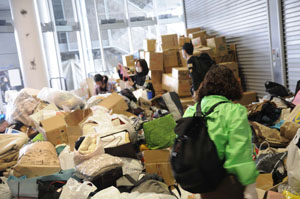 Equally moving has been the unwavering cooperation that people have shown in these trying times. Granted, there have shortages due to hoard shopping, but people are being very cooperative and nowhere have I seen this better than at Saitama Super Arena.

Saitama Super Arena is a place that pops up frequently in otaku news. Japan’s answer to the Hollywood Bowl, it has played host to everyone from Gackt to Hatsune Miku and has been featured in many modern Kamen Rider shows as a battleground. As of this writing, Super Arena is currently playing host to 2,300 evacuees from Fukushima, better known as the location of the malfunctioning nuclear power facility. While no Kamen Riders were to be seen, there was such a surplus of volunteer staff and supplies that the facility’s needs were met within the weekend.

With this and many others, there has been a lot of triumphalism amongst Japanese residents, citizen and foreigner alike. For all the grumbling many foreigners do about the nation’s sometimes overblown hubris, for once we can be in agreement that it is all too well deserved in this case and the citizens have put their money (and hands) where their mouth is. The sun has yet to set on old Nippon.