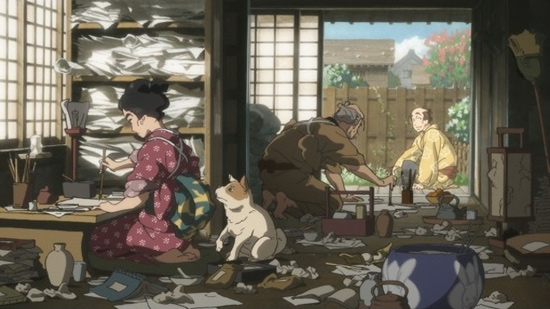 Japan’s Edo Period marked the unification of the country, the moving of the capital from Kyoto to Edo (modern day Tokyo) and most importantly, the end of a long period of internal warfare. This all led to a new level of prosperity for the merchant class who found themselves enjoying the pleasures of Edo, including geisha, brothels and art. The most famous artist of the day was Katsushika Hokusai, who created some of Japan’s most iconic images.

That’s where the history usually ends, but a less-known chapter of the Hokusai story is the tale of his daughter O-Ei, who, a skilled artist in her own right, assisted Hokusai with (and likely outright painted) many of his later works.
O-Ei and her brilliant but difficult father are the subjects of Miss Hokusai, the new film from director Keiichi Hara (Colorful, Summer Days with Coo) animated at Production I.G.

From the opening scene, in which we meet O-Ei as she crosses a busy wooden bridge, it’s obvious how big a role the city of Edo itself will play in the film. Hara and co. animate Edo’s canals (before all the concrete, Tokyo was said to be the Venice of the east), traditional houses, pleasure quarters and the city’s various inhabitants in splendid, almost fetishistic detail.

But comparatively little effort seems to have been spared on giving Miss Hokusai a cohesive narrative. 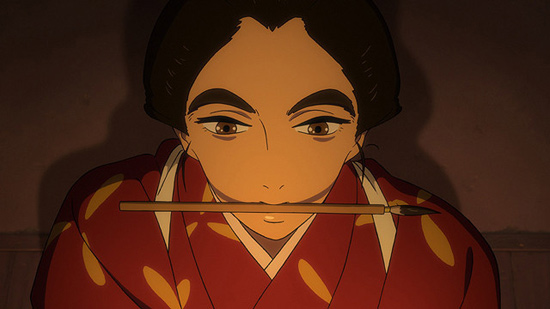 Miss Hokusai is based on a manga by artist and Edo researcher Hinako Sugiura, and the film feels like it’s structured on individual chapters of manga. Each scene almost works independently of the previous one in a series of vignettes, usually based around a famous Hokusai work. A few scenes feature O-Ei and Hokusai as kind of Edo-era Ghostbusters, fixing artwork possessed by demons. Others deal with O-Ei’s complicated love life, including her mixed feelings toward an apprentice of her father’s and a very awkward trip to a brothel to improve the realness of the erotic art she’s contracted to paint (in real life, O-Ei supposedly mocked her husband for his poor art and divorced him to care for her father in his advanced age).

The best scenes in Miss Hokusai are the ones in which O-Ei spends time with her younger sister, Onao. Blind since birth, Onao is virtually ignored by Hokusai, who almost seems ashamed as a painter to have borne a blind child.

Instead, it’s O-Ei who provides Onao with a familial connection, taking her on tours of the city, describing the sights and helping Onao interact with Edo via her other senses. One scene in particular where O-Ei and Onao go exploring right after a snowfall is told almost entirely without dialogue and one of the most subtle and affecting bits of animation I’ve seen in a while.

But while the film features a number of these well-done scenes, they never quite achieve cohesion. Narratively underwhelming, Miss Hokusai might be better regarded as a collection of interesting vignettes, an introduction to an unfairly-forgotten artist and a beautiful tour of a long-gone Tokyo.