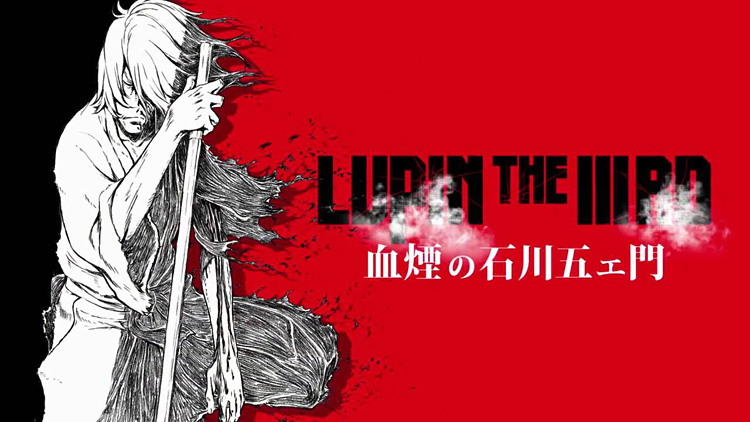 If the sudden flood of new Lupin the Third properties feels a bit hard to keep track of, well, there are certainly worse problems to have.

The franchise has come a long way from its thinnest years, when about the only Lupin stuff being released were the largely yawn-worthy TV specials. By contrast, in the last five years alone, Lupin fans have gotten two TV series, including the first “main” series since 1984, and no less than three theatrical releases (even if the quality of a few of them was… questionable).

The best of those theatrical releases was Lupin the IIIrd: Jigen’s Gravestone, a sequel to the The Woman Called Fujiko TV series. Directed by Takeshi Koike (Redline), the 60-minute Jigen’s Gravestone resisted definition, landing somewhere between a film and an original video. 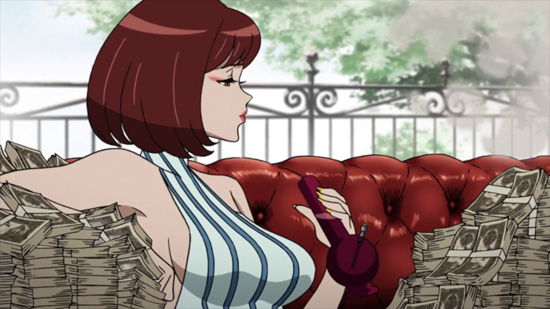 Regardless of what you’d call it, it appears to have been a success: Koike and co. have just released the second of these Lupin the IIIrd features, Goemon Ishikawa’s Spray of Blood, and I’m happy to report it’s a bloody fun piece of work.

Goemon, Lupin’s tight-lipped samurai pal, has been hired as a bodyguard for a gang boss – much to the chagrin of the gang’s members, who are confident in their ability to protect the boss without any hired help. But Goemon soon gets a chance to show his worth, and his legendary choppin’ skills, as he slices a bullet aimed at the boss clean in in half.

In actuality, Goemon has infiltrated the gang in order to help Lupin and Jigen steal break into its casino. Still, when a samurai tells you he’ll protect you with his life, he means it. So when the boss is killed by Hawk, a hulking, Paul Bunyan-looking guy (who’s actually after Lupin and crew, for reasons never really explained) Goemon falls into despair. The rest of the film bounces between Lupin, Jigen and Fujiko (and, eventually, Zenigata) as they run from the seemingly invincible Hawk, and Goemon’s path toward retribution, which, you guessed it, ends in some serious blood spraying. 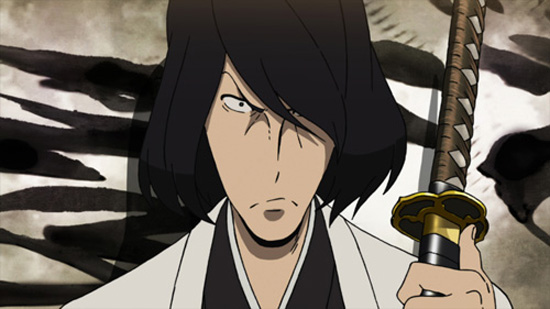 Speaking of Koike, he’s in fine form here, with a bit more of his unique touch apparent than it was in Gravestone. A pair of twin gang henchmen look like they’re straight out of Redline, for example, and there’s a great scene where Lupin, Jigen and Fujiko, lounging around after a successful robbery, give off a serious Trava: Fist Planet vibe. This being Koike, there’s also an exceptionally well-animated car chase, though it skids to a halt far too soon to rival the franchise standard in Castle of Cagliostro. Well, these things are only 60 minutes, after all.

These things (that is, the Lupin the IIIrd series), as one-off Lupin stories released at regular intervals, seem to have taken the place of the TV specials. They might not come out once a year (it’s been about two-and-a-half since Gravestone), but they’ve got a great director at the helm, feature animation that leaves the TV stuff in the dust, and can feature a level of violence you can’t do on-air either. By giving us a look into the psyche of the Lupin series’ most reticent character, providing a memorable villain in the form of Hawk, and giving Koike more room to be his amazing Koike self, Spray of Blood also improves on Gravestone and bodes well for the next one, should the producer gods deem it worth animating.

So: we’ve had a series centered on Fujiko, and now two of these mini-films around Jigen and Goemon. Who’s next?